Mary-Kate and Ashley Olsen take multiple covers of the April issue of Elle UK, in a photo shoot by Alexei Hay. Why can’t these girls smile? Why are they always so… sad? Grim? Pissy? Bored? Anyway, they’re promoting their multiple fashion lines – The Row, Elizabeth and James and Olsenboye – as well as reveling in their creepy twin stuff. And don’t start yelling at me – I’ve known twins before, and I accept the idea/fact that twins will always have a special, unique bond. But whatever MK and Ashley have is different, and it definitely becomes a bit creepy. Especially when they talk about sharing one mind, one thought process. Here are some highlights from the interview… I don’t even know why I bothered breaking down the quotes per twin since they share a brain.

Ashley on their twin-brain: ‘We’re attracted to different things, but we arrive at the same place. I think we’re probably unaware of how intuitive it might seem from the outside. It’s basically one thought process shared between two people.’

Ashley says they’re kind of OCD: ‘We are perfectionists. We’ve always wanted to be closely involved with everything, totally hands on – that’s why it works. If we step away, it stops working. I know it sounds controlling, but that’s how it has to be.’

Ashley doesn’t want the spotlight: She reveals she ‘doesn’t like to be the centre of attention any more’, saying: ‘I don’t have to be a pretty face. I’ve done that, but now it’s important and liberating to be on the other side of the lens.’

Ashley on quitting acting: “We worked non-stop until we were 18. Then we decided to take a break and go to school — and that was when we decided to question whether we would carry on in entertainment…It was time to step behind the process. I wanted to work on other things. It doesn’t mean I’m not interested in Hollywood, I like the way it operates and the people who are involved and the sense of possibility. But if I ever do get back in, it’s not going to be as an actress. It just felt right to move away.”

MK doesn’t get designers-as-celebrities: ‘Of course we knew about the trend of celebrities as designers, but we’d done that already when we were much younger. I don’t understand the new idea of designers as celebrities either. To me, the Phoebe Philo (British fashion designer) kind of modesty is the way to go. We love beautiful things. That’s the only driving impulse. It’s about being creative, but having a bigger vision for that creativity. For a designer to be successful nowadays, they need to know much more than just design. [Tom Ford], his career is astonishing – the way he’s been able to do everything he has wanted to do and really not compromise at all. From fashion to film, it’s such a singular vision.’

My only real problem with the quotes is the obliviousness with which they’re both acting like they haven’t just participated in a cover shoot for a major magazine. Ashley says, “I don’t have to be a pretty face. I’ve done that, but now it’s important and liberating to be on the other side of the lens.” MK says, “I don’t understand the new idea of designers as celebrities either.” You’re on the cover of a magazine!!! You are celebrity designers. You use your images, your celebrity, your fame, the public’s interest in YOU to help promote your clothes. It doesn’t make them bad designers or uninteresting celebrities – it just makes them disingenuous. Elle UK photos courtesy of The Fashion Spot and The Mail. 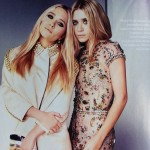