Usher paid $12,000 for a Goldendoodle puppy at a charity auction: ridiculous? I have very mixed feelings about all of this. Usher attended the Pencils of Promise gala several days ago, and he ended up bidding on a special item during the charity auction. That item? A designer dog – a Goldendoodle puppy. Goldendoodles are those Golden retriever-poodle mixes that a lot of people want for whatever reason. Anyway, Usher ended up winning the puppy with a $12,000 bid (outbidding Jessica Szohr’s $11,000 bid). Well, the money goes to Pencils of Promise, which is totally a worthy cause and that’s great. But I can’t help but think… $12,000 for a designer dog?! REALLY? Usher knows there are thousands of dogs in need in shelters, right?

A cross-bred dog that is a mix between a golden retriever and a poodle, Usher’s new pet came with a price tag of $12,000 — money that goes to the Justin Bieber-endorsed organization that builds schools in impoverished nations. (Not to be ignored, Szohr bid an impressive $11,000 in an attempt to take the animal home, according to reports.)

“Poppy Raymond is what I’m think of namin’ her . . . however there are two gregarious 3- and 4-year-olds that will have the last say — and the responsibility that comes with her,” the singer, 34, tweeted after taking home the animal, referring to his two sons, Usher Raymond V and Naviyd Raymond, who will likely be bowled over by their dad’s latest purchase.

Donating funds to adopt a new pet wasn’t the only kind gesture Usher made at the event. The “Numb” singer also donated a private dance lesson as an auction item. Following a bidding war between Bieber’s manager, Scooter Braun — the brother of Pencils of Promise founder Adam Braun — and two families in attendance, Braun let the families take the prize after they each bid $65,000 for the lesson.

Poppy Raymond? Because she’s kind of poppy-colored? I guess. Alright, that’s a cute name for a dog, and it does sound like it’s something kids would come up with. Have we ever discussed the fine art of animal-naming? I love giving my animals extravagant names, even when I was a little girl. I had a crazy cat named Zelda Fitzgerald and a sweet kitty named Princess Isabella (we called her Izzy). Right now my dog goes by like ten different names!

Anyway… yeah. I’m not a huge fan of designer dogs and I don’t understand why people don’t just get rescues. But considering it was for charity… I am going to cut Usher some slack. I guess. 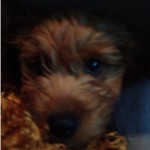 113 Responses to “Usher paid $12,000 for a Goldendoodle puppy at a charity auction: ridiculous?”