I’ll freely admit that I feel a bit lost without the constant river of Miley Cyrus coverage, but that trainwreck has run its course for now. Hopefully I’ll find a new mess to obsess over pretty soon, but in the meantime, Miley has decided she wants some new attention too. She shaved off her eyebrows, posed alongside Miranda Kerr, and put the picture up on Instagram. What do you think? It makes her look like an alien. She’s probably going for some variety of creepy sexy alien. Gross.

In other news, Miley has been placed on “vocal rest” by her doctors. I have a theory on this. Here’s Miley’s emoji-laden tweets on the topic.

happy to get some rest. time to go be sicky 😿

Plus a little bit of drama for good measure:

Why the sudden need to declare doctor’s orders on Miley’s part? Well she had a pretty disastrous performance over the weekend on the UK’s X-Factor show. Miley showed up in a wrinkled, gold Lanvin gown and threw on a turban. Then she sat on top of a fake sand dune and belted out “Wrecking Ball.” Girlfriend sounded ROUGH. Here’s the video evidence. I guess she’ll be lip synching on tour. 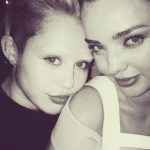 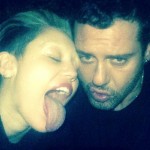 142 Responses to “Miley Cyrus shaved off her eyebrows: cool, creepy, or attention seeking?”