Madonna has a really good new interview with Out Magazine, and it’s actually one of the best pieces I’ve read in a while. Shocking, I know. For some reason, I’ve been liking Madonna’s interviews in particular lately, and this Out piece might be her best one. It’s not just what she says – although the conversation goes from Joan of Arc to women’s rights to Detroit – but the analysis of Madonna’s decades-long relationship with the LGBT community. If you have ten minutes, it’s definitely worth the read. Some highlights:

Madonna on the theories that Joan of Arc was gay: “Why was she gay? Come on! OK, she dressed like a boy and she cut off her hair. That’s what the church tried to say. Also that the dauphin who supported her, that he was gay. According to historians, the dauphin is the one who supplied her with the army, the cavalry, whatever, to take on England. Did they thank her for that? Of course not. They went, ‘Wait a minute, how could a girl do that? There must be something wrong with her.’ ”

She relates to Joan of Arc: “I can relate. Sometimes I’m getting burned at the stake metaphorically. Though not right this second.”

On gay rights being ahead of women’s rights: “Gay rights are way more advanced than women’s rights. People are a lot more open-minded to the gay community than they are to women, period… It’s moved along for the gay community, for the African-American community, but women are still just trading on their ass. To me, the last great frontier is women…. Women are still the most marginalized group. You’re still categorized—you’re still either a virgin or a whore. If you’re a certain age, you’re not allowed to express your sexuality, be single, or date younger men.”

On wishing that she were gay: “I didn’t feel like straight men understood me. They just wanted to have sex with me. Gay men understood me, and I felt comfortable around them. There was only that one problem, which is that they didn’t want to have sex with me! So…conundrum! I was like, ‘How am I ever going to get a date? Maybe if I cut my hair and I lose a lot of weight, someone will mistake me for a guy and ask me out.”

It seems like Madonna didn’t so much wish she was gay as she wished she was a gay man. Look at her career, look her approach to her career and her life: she’s less a straight woman and more of a gay man. I also think it’s interesting that the “Queen Bee” of gay culture is telling gay men – in one of the biggest LGBT publications in the country – that they still have it easier than the average woman. That male privilege extends to gay men too, and women still have to “trade on their ass.” She’s not wrong, you know? 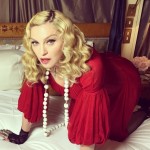