A bunch of the lower-tier tabloids have stories about George and Amal Clooney this week. As you can see, OK! Magazine even put Phantom Baby Clooney on this week’s cover. For what it’s worth, I don’t think Amal is pregnant, nor will she get pregnant any time soon. That’s why the unnamed source went to People Magazine last week – Amal wants us to stop Bump Watching her. We’re only supposed to be looking at her clothes and her fabulous, brilliant life.

There are some other interesting Alamooney stories out there, like this one that combines legitimate Sony Hack information with an eye-rolling piece of gossip about George and Amal’s marriage.

George Clooney has his very own bat signal! The star of 1997’s Batman & Robin — whose batmansenior@mac.com email address surfaced April 16 in WikiLeaks’ Sony hack database — “often uses the names of his roles as pseudonyms,” a source close to the Ocean’s Eleven actor reveals to Us Weekly. “He signs emails to friends with a simple ‘Danny Ocean’ and he loves leaving voicemails saying, ‘This is Batman.’”

After all, he’s Batman forever. “George gets a kick out of the fact that he played Batman,” says the insider. “He’s so proud of all his movies.”

Wary of hackers, the 53-year-old refused to create an email account until the early 2000s — his first address was a tribute to his O Brother, Where Art Thou? character, Everett McGill! — adds the insider. “He never trusted it. He has always worried about people finding a way to access his information.”

Now, he’s especially reluctant to hit send, even when corresponding with wife of seven months, Amal, 37. “George prefers to communicate with her by phone,” adds the source. “He loves hearing her voice!”

I can understand the (prescient) concerns about hacked emails, but does George realize that the same government agencies reading his emails are the same ones with FISA wiretaps on his phone lines? I am enjoying the idea of George calling up Amal and saying, “This is Batman, what time is dinner?” To which she says, “I don’t cook, a—hole. We’re going out tonight.” And Batman is all, “Girl, why aren’t you capable of heating up a g—damn bowl of soup?! BATMAN OUT.”

Oh, and this week’s National Enquirer has a story which I sounds like it came from these pages. The Enquirer’s sources say that Amal is so happy now that they’re in New York, away from Rande Gerber and Cindy Crawford. Apparently, Amal thinks Rande is a “frat boy” and she hasn’t “clicked” with Cindy at all. Amal wants George to spend his free time with her and her alone, but George wants to live up, singles-style with his bro Rande and Rande’s cool wife (Cindy gets it, man). The Enquirer interestingly notes all of the times that George has spent time with Rande and Cindy over the past several months while Amal is presumably at home, fuming. I really believe that George is so used to having girlfriends who just go along with whatever he wants, girls who are happy to spend every vacation with George’s circle of friends, and George doesn’t know what to do with a woman who isn’t impressed by “Cabo with Rande and Cindy yet again.” On this, I’ll give it to Amal. I hope she puts her foot down and weans Clooney off his frat-bro buddies. 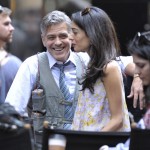