Last week, I shared a Benedict Cumberbatch conspiracy theory with CB, but now I have to take it back. My conspiracy was that Sophie Hunter had already given birth and they were just waiting to announce it. I developed the theory because I honestly thought her due date was closer to early May and because Bendy has been suspiciously quiet this month.

But I was wrong. As you can tell. These are photos of Benedict and a still-pregnant Sophie out and about in London on May 20th. You can see some better photos of them out on the same day here at the Daily Mail. So… Sophie is still preg. I guess she was just showing really early. And this does mess up the timeline a little bit. Let’s say Sophie is due in early June. That means it was still a shotgun engagement, but Benedict did propose to her basically as soon as they found out about the pregnancy. Which is a little bit better than the previous theory, that he waited several months to propose. Of course, I still sort of believe he knocked up, got engaged to and married a woman he really didn’t know all that well.

In any case, they’re happy enough. I suppose. And the UK papers say that Bendy and Sophie have bought a large home in London:

Benedict Cumberbatch is giving up his bachelor pad and preparing to move into a fancy North London town-house. The 38 year old actor and star of highly popular BBC show Sherlock is reportedly doing up the gaff in order for it to be ready for he and his pregnant wife Sophie Hunter to move in as soon as possible.

The £2.7 million, four storey home is just around the corner from a property owned by former leader of the Labour Party, Ed Miliband. The couple were married on the Isle of Wight in February, shortly after confirming that they’re expecting their first child.

They kind of waited to the last minute to move out of Benedict’s bachelor pad, right? The constant vibe I’ve been getting from all of this is that Sophie comes from money, and it would’t surprise me at all if Sophie’s family has funded much of their new life together. I think her family paid for the wedding, maybe even bought the Hunterbatches a little country home, and now this. A nice pad in the city for all of the little Cumberbabies.

PS… His hair is looking better these days. 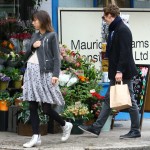