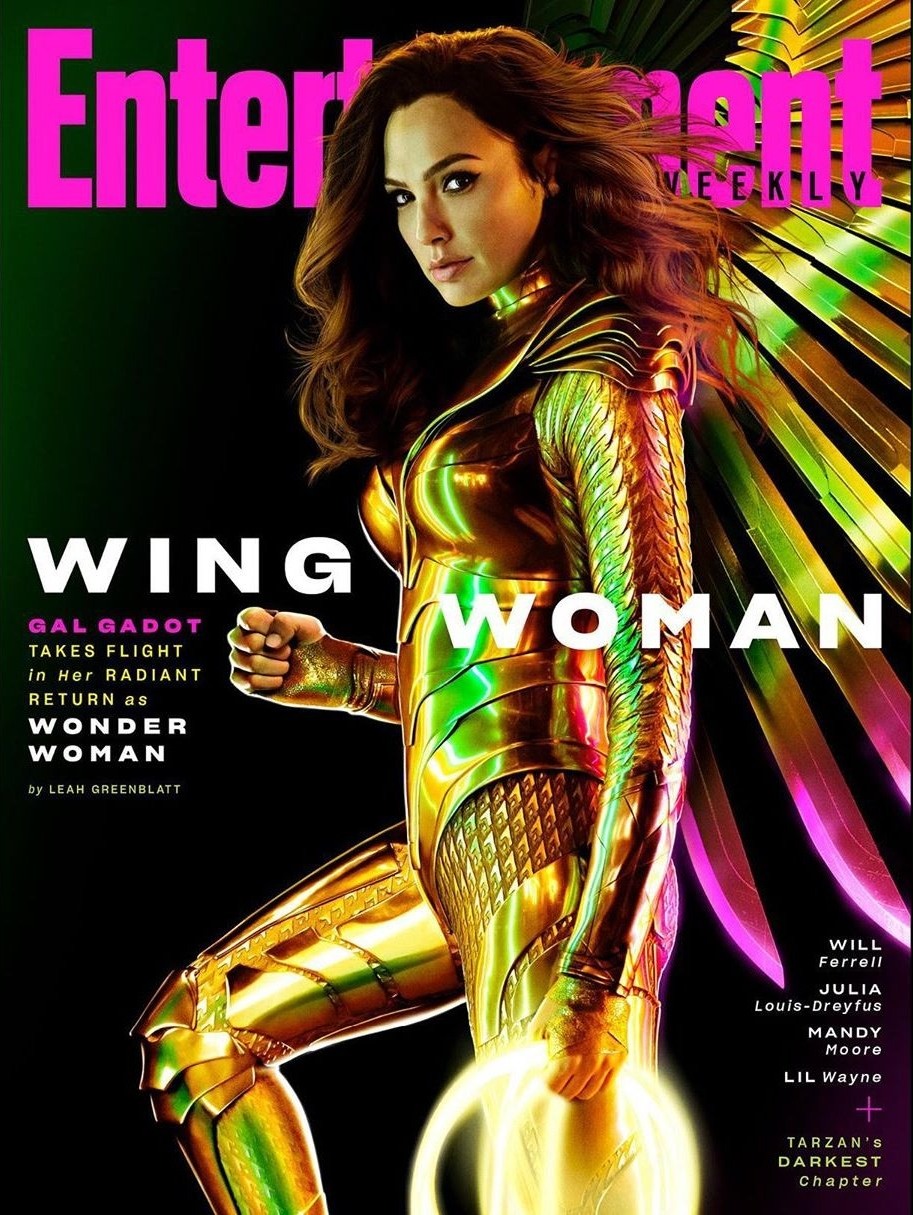 I’m not the kind of person who geeks out about superhero costumes. If anything, I like to critique superhero costumes for fashion purposes or wearability and/or unsuitability for the world-saving tasks at hand. With all that being said, Wonder Woman’s gold costume is EVERYTHING. It might be the coolest thing I’ve ever seen. Is it practical? Eh. Is it suitable? Meh. Is it completely armored? Maybe. Is it bulletproof? Well. Still, it’s beautiful and I love it. Obviously, Gal Gadot-as-WW covers the current issue of Entertainment Weekly. You can read the piece about the history of WW’s gold armor here. You can read the EW cover story here. Some highlights:

Gal Gadot on the 1980s: “I was born in ’85, but it’s funny, I really do remember. Probably more so because of my parents, but it was a such a standout decade as much as it goes with fashion, music, politics. And the look of everything! The colors.”

Kristen Wiig on Cheetah: “I did not really know so much about Cheetah. Before I even talked to Patty [Jenkins], there was an idea that maybe it might be about being a villain for the movie, so I went online and looked at all the villains of Wonder Woman to try to figure out which one, because I was so excited. And I was really, really happy to find out it was her.”

Chris Pine on coming back to play Steve: “In the first movie, I played the world-weary soldier who has seen all the depravity that humankind is capable of displaying. And in this one I get to be much more wide-eyed and joyful. My role is really just as a friend, lover, boyfriend-cum-bodyguard who’s trying his best to help Diana on her mission. I’m like the Watson to her Holmes.”

Gal on how she didn’t need a chemistry test with Chris: “There was no chemistry test! Honestly, we just had it…. And where other men could be intimidated by the fact that they’re not, you know, the hero hero that men usually are, with Chris he enjoys it, and it challenges him in a way that is so much fun and so funny.”

Gal on playing WW: “I think that when I just started, I didn’t understand the magnitude and how much this character means to people. I was feeling like the little girl who’s supposed to climb the Kilimanjaro mountain, scratching my head and thinking, ‘How the hell am I going to do this?’ But now I feel like I know where I’m going and I know what we’re doing. If in the first movie Diana didn’t understand the complexities of mankind, now she completely understands it…. She loves people, and I think that’s the key to this character, you know? She has the powers of a goddess, but she has the heart of a human.”

EW doesn’t reveal HOW Steve comes back and magically appears in Diana’s life again, but no one is talking about that from the film, which is smart. I mean, that’s why I’ll probably go see this in the theater – I want to find out how and why, and it better not be lame. Although even if it is lame, I enjoy Pine and Gadot’s chemistry together so much.

A post shared by Entertainment Weekly (@entertainmentweekly) on Feb 13, 2020 at 7:01am PST

A lot of changes are coming in the #WonderWoman sequel, including one major visual transformation. Tap the link in our bio for a brief history of Wonder Woman's golden armor and why it's so important to Diana's story. #WW84 📷: Warner Bros. Pictures

A post shared by Entertainment Weekly (@entertainmentweekly) on Feb 12, 2020 at 8:47am PST