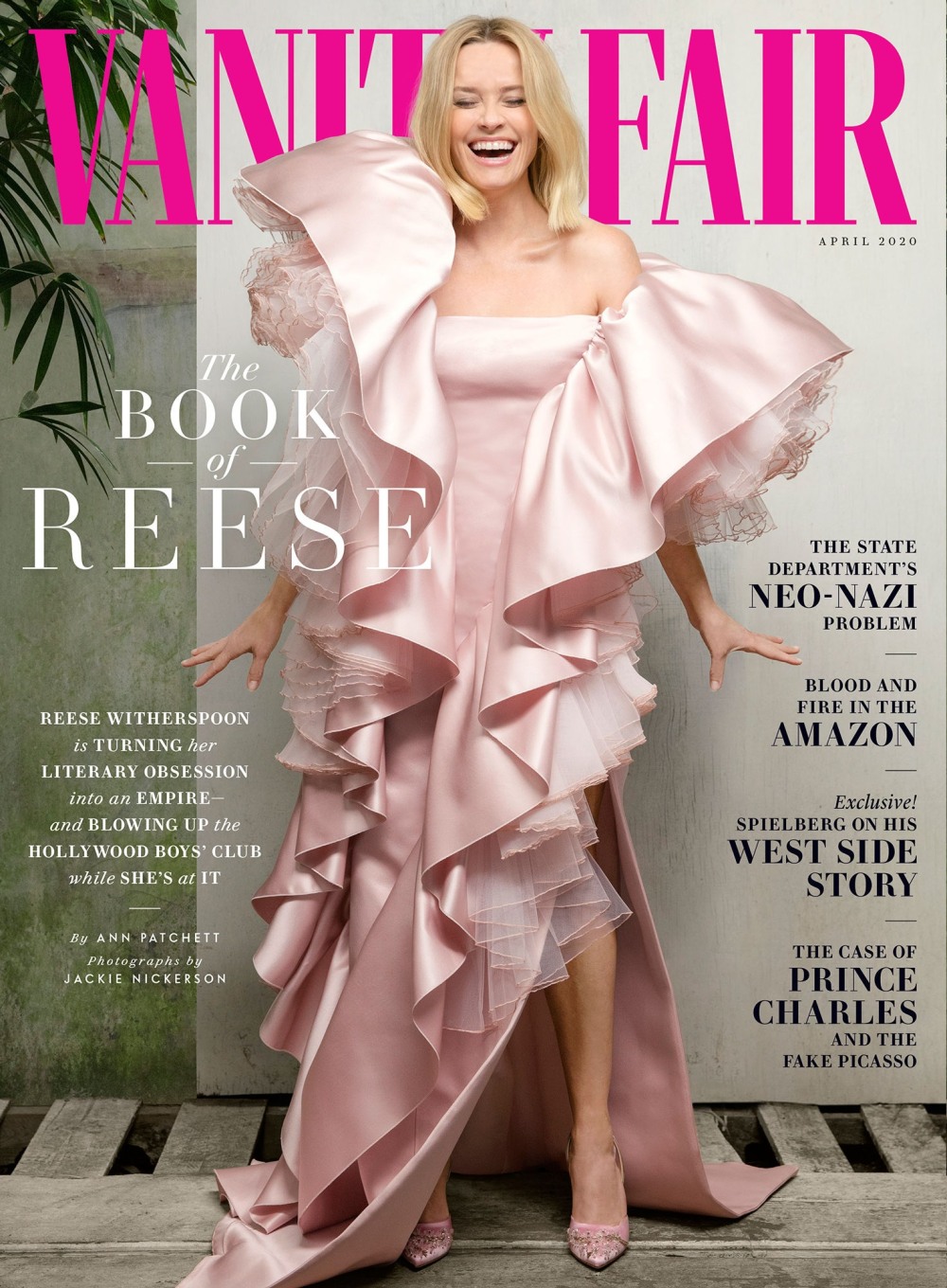 Reese Witherspoon covers the latest issue of Vanity Fair to promote Little Fires Everywhere. She’s settled into what her persona/deal is at this point, after years of what I thought were some wrong tracks and weird moments. Her deal, right now, is to keep it simple: she’s a huge reader, her love of books led to producing, and everything culminated with Reese developing, producing and starring in several projects with her female-led lady-ensembles. She does not take credit (or want credit) for breaking any glass ceiling or anything like that. But she still gets a lot of credit. As she should, honestly. Her actions over the past six years have led to some big changes in how women produce AND with equal pay in the industry. This VF cover profile is good, a tad overwritten, but good. Some highlights:

Her book club is helping authors do Oprah-Book-Club-level sales: “It’s nice to highlight authors who don’t have a track record of selling a lot of books. To watch what happens to them is extraordinary, and really emotional for us.”

Demanding equal pay for equal work from HBO: “An actress came up to me at a party and said, ‘Do you know what you’ve done?’ I had no idea what she was talking about. The day after the HBO equal pay thing went through, they called her agent to rewrite her contract. She was then paid twice as much as she had been.”

She loves Laura Dern. “You know, you meet people, you’re friends with people, but I say about a few women in my life, they are my sisters. I don’t have a sister and I found my sister in Laura. No one makes me laugh like Laura. She’s magical.”

Her character in Little Fires Everywhere: “Creating that character was a new challenge for me. Despite her intelligence and social grooming, she has a deeply embedded lack of awareness of her privilege. She’s constructed a life that’s impervious to the world she lives in. She’s so comfortable in her social standing and her wealth that she feels entitled to analyze anyone outside her sphere but never takes a hard look at her own shortcomings.”

When Reese is asked how women can still pose for sexy photos while talking about subjects like sexual abuse & harassment: “I can tell you what my daughter would say. Why should a woman have to sublimate her own sexuality, because that’s not her responsibility, the way she’s viewed, right? Her sexuality shouldn’t be diminished because she’s having a conversation about consent. You should be able to be sexual, to display your sexuality, because consent is consent, no matter what…. it’s complex. It’s not how I grew up. I grew up thinking you dress the way you want to be treated. But things are changing.”

She never wanted to be the sexy girl in Maxim: “I always had a thing about exploiting sexuality. When I came up in the business, there were all these men’s magazines we were told to cater to. I was never in Maxim. I was never picked as a GQ girl, and I’m okay with that because that’s not how I wanted to be viewed. That’s not how I see myself. I always say, ‘Funny doesn’t sag.’ I always just wanted to be funny, you know? And you can’t be rendered obsolete if you just keep being funny. Guess what gets rendered obsolete? Your boobs go south, your face goes south, your ass goes south, but you can always be funny. And those are my idols, my heroes—Goldie, Holly Hunter, Diane Keaton, Nancy Meyers—smart and funny.”

Working in films at a young age: “Ah, yes. Bad things happened to me. I was assaulted, harassed. It wasn’t isolated. I recently had a journalist ask me about it. She said, Well, why didn’t you speak up sooner? And I thought, that’s so interesting to talk to someone who experienced those things and then judge them for the way they decide to speak about them. You tell your story in your own time when you’re ready. But the shame that she tried to put on me was unreal, and then she wrote about how selfish I was for not bringing it up sooner. There wasn’t a public reckoning 25 years ago when this stuff happened to me. There wasn’t a forum to speak about it either. Social media has created a new way for people to express themselves that I didn’t have. That’s the great strength in power and numbers. I think we have a lot of judgment and that’s unfortunate because we’re all tenderfooted in these new times. We’re trying to find our identity. That’s what I really like about The Morning Show.”

I really hated that Reese was even asked the question about “how can actresses pose sexy when they’re talking about being harassed?” That kind of thinking is ridiculous at this point. We’ve gone so far beyond that, the idea that an actress looking sexy in a magazine is somehow “opening herself up” to harassment and abuse, like she can only blame herself for being so sexy. (Gosh, maybe Emily Ratajkowski *does* have a point, huh?) And while Reese’s initial answer is good, she then goes off on some Not That Kind of Girl tangent about “funny doesn’t sag.” God help us all if a comedienne is sexy too! Or that women WANT to be sexy and they want to be funny, complicated, intelligent, multifaceted people. Lord.

Reading prodigiously is one of @ReeseWitherspoon’s superpowers—and she’s using it to reshape Hollywood for women, one book at a time: “I can remember being in pictures in which I was the only woman on the set and there would be 150 men." Read our April cover story at the link in bio. 📸by @jackie_nickerson at @innergardens in Malibu, CA. Styled by @samiranasr.