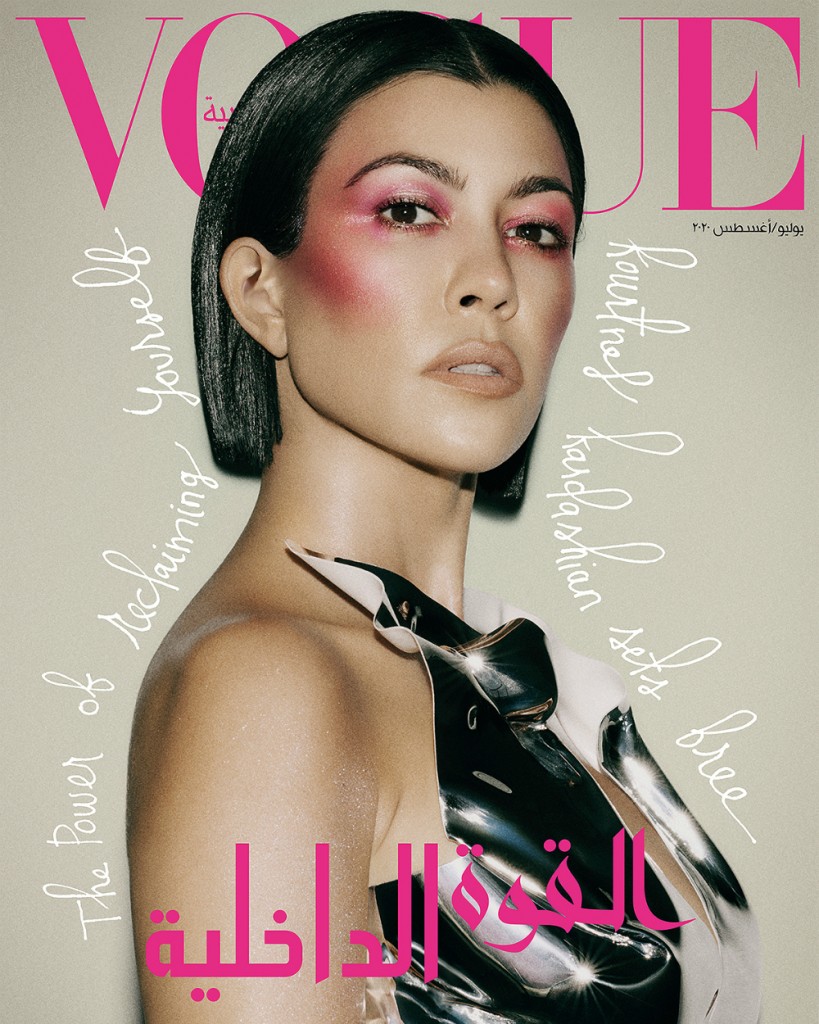 Vogue Arabia chose Kourtney Kardashian for its July/August cover. Of the sisters, she is the most attractive to me, but these shots, which you can see here, do her no justice. If I’m being honest, part of the problem is her modeling more than her styling. The write up is mostly about what Kourtney is doing now that she’s “quit” Keeping Up with the Kardashians. Poosh is up and running. It’s not a bad site, either. Visually it perpetuates the unnatural beauty standards the Kardashian/Jenners promote but the actual articles have a little depth to them. I appreciate that they are trying to push awareness, like promoting Black-owned businesses. At home, though, she’s focusing on her kids. And by focusing, she means to really be present for them by putting down her phone when she’s with them.

While (Kourtney) Kardashian emphasizes how grateful she is for the incredible memories and opportunities that came with the (KUWTK), she admits that, like many during the pandemic, focusing on her family and adjusting the work/life balance is now her priority. “I always try my absolute best when I’m with my kids not to be on my phone, to be present in what we’re doing, and have those moments where you’re looking in each other’s eyes and connecting. It’s so important,” shares Kardashian. “I usually take one day on the weekend when we have no plans, we hang out at the house in pajamas or sweats. We sleep in. I like to not be on a schedule on that day.”

The star feels that younger generations need to start enjoying life more and having fun, and not be so obsessed with social media. “Khloé and I, we say when we go to our younger sisters’ parties, we’re the most fun out of anybody,” she explains. “It’s so true because I think we’re more used to not living on our phones.”

I think what Kourtney said here is great advice. I, too, am trying to put my phone down if I am in anyone’s presence. I know people who claim they can multitask while listening to me. Even if that’s true, I feel like I’m less important than whatever it is they’re doing. I believe many parents make the mistake of picking up their phone, even briefly, when they are playing/chatting with their kids. Most think they aren’t doing it often, but they usually are and the kids notice. They probably don’t call us out on it because we’re the parent, but it still suggests they aren’t worth our full attention. Making dinner might pull focus but a tweet shouldn’t, you know? So I think Kourtney trying to be present with her kids is great.

However, I also find this kind of hard to believe. The sheer volume of selfies that come from this family suggests they’ve had phones implanted into their hands. And I’ve only watched some clips of their show, but they carry on full conversations while scrolling through their phones, albeit with varying degrees of coherency. Maybe that was just for the cameras. I like thinking that Kourtney does actually spend full, unstructured days with her kids with minimal phone invasion.

But I admit, I can’t quite wrap my head around Kourtney and Khloe being, “the most fun out of anybody,” in any situation.

Minnie and Tink, before your eyes.