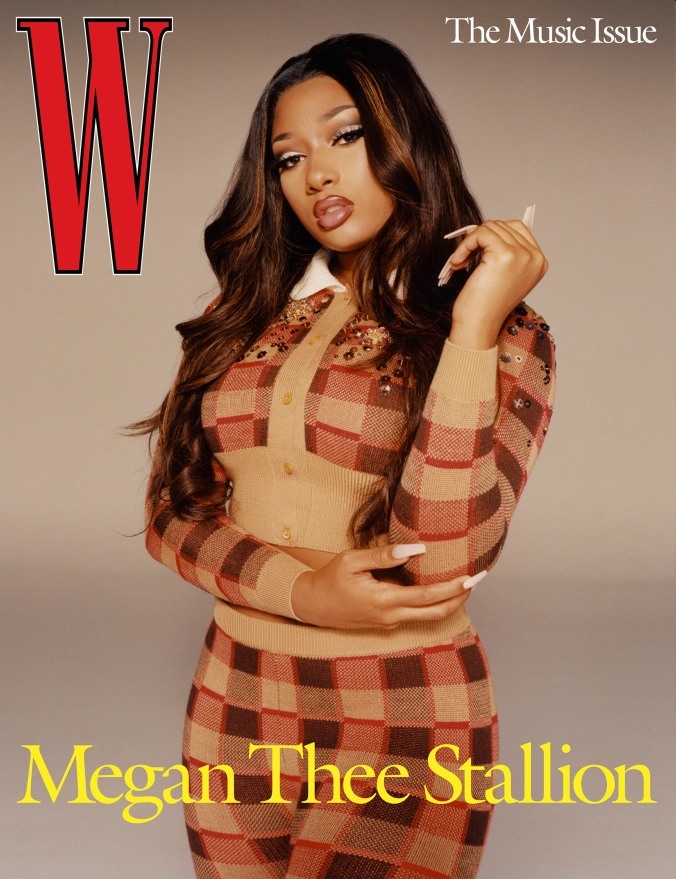 I feel like stylists and photographers are starting to come around to how to style and photograph Megan Thee Stallion. She’s got some great angles and, in my opinion, she’s very styling dependent in still photos. When you can see her dance and talk, there’s never an issue – you can see how sexy and sweet and beautiful she is. But still photography took a minute to catch up. That being said, I friggin’ love this W Magazine editorial with Megan. She looks amazing here. She was photographed months ago, and the interview took place just days before Trey Lanez shot her in both feet. Some of the quotes feel so prescient in a horrific way. You can read the full piece here. Some highlights:

On being criticized: “It’s really mind-blowing to see the nasty things that people say to you. I don’t know if people think you not gon’ see it… I feel like just being an artist, waking up every day, voicing your own opinions is a risk… Just talking. Being real is a risk.”

On the lockdown: “I’m not an introvert, but I do like to sit down and take some time to myself.”

Inspiring girls & women: “I love the fact that I have a voice, and I love the fact that I do inspire a lot of girls, and I didn’t realize it at first. I was just being me. Some of the things I say, I realized that some women might really wanna say them. So I just keep all of these things in the back of my mind when I’m writing. I’m not gon’ say I feel pressure, but sometimes I will get a little tingly because I just want to put out the best music for my fans as possible. I don’t like to disappoint them. So when I’m recording, I’m super hard on myself. I’m just always like, Okay, I need to go harder than that. I’ll write and rewrite a verse about eight times.”

Naturally sexy: “I feel like I’m just naturally kinda like a sexy person. Like, I’m not trying to be. But now it’s, like, a public thing. And I’m always dancing. I always got on shorts. So it’s like, ‘Look at her, dancing again.’ Well, I was gon’ do that anyway… Twerking was supposed to be a thing that was sneaky fun—like, bad. And now it’s a thing where it’s supernormal, it’s very casual, you see everybody doing it. Let me say this: Different body types offend different people. So if you are maybe smaller, twerking doesn’t come off as offensive, but when you got the assets, then that’s when it comes off as, Oh my God, what the hell is going on? It becomes a sexual thing. But I can’t help it that I got this body. I’ma twerk, and it’s gon’ look this way, and it might be offensive to you because I look like this, but I can’t help it. And I don’t care. I don’t care that you feel that way.”

On racism & BLM: “The moment does feel different because it feels bigger—people have been able to hide a lot of racism, but now that we have social media, we see everything… I really like how we’re able to catch these people doing these disgusting things and put ’em on blast, and people are getting fired from their jobs. You getting your scholarship taken away from whatever school you thought you was about to go to. It’s like, Yeah, we see you. You like to be disgusting in private, so let us show you how to keep that same energy in public. I like that we get to call everybody out now….Why would you not speak out, or why would you not do everything you could to make a change if you know this is just wrong, in general? I shouldn’t have to tell you how to fix racism. I shouldn’t have to tell you not to be racist. I shouldn’t have to tell you how to help us.Like, you should just genuinely feel that way. The color of your skin does not dictate the function of your brain.”

I feel like people consistently forget how young Megan is – she’s 25 years old, very much a woman, yet she’s a different generation from someone like Nicki Minaj (37), Beyonce (“38”) or Katy Perry (35). Megan is younger than Cardi B (she’s another one people think is older, but she’s only 27). Megan is younger than Miley Cyrus and Ariana Grande (both 27). My point is that Megan is still figuring out a lot of stuff and she’s going through it in public, the good and the bad. Also, yes, she’s just a naturally sexy person. And I love what she says about twerking too.

THE MUSIC ISSUE I “I feel like right now, you just cannot forget to be happy,” @theestallion told @clovito for our latest cover story. “It’s all this bad going on. You just really have to remember, ‘What did I like to do? What makes me smile?’ Dancing really makes me smile, and I know dancing makes a lot of people happy. That’s my outlet. That’s the way I express myself. Whatever you want to do to stay positive, do that.” Read the full interview at the link in bio.