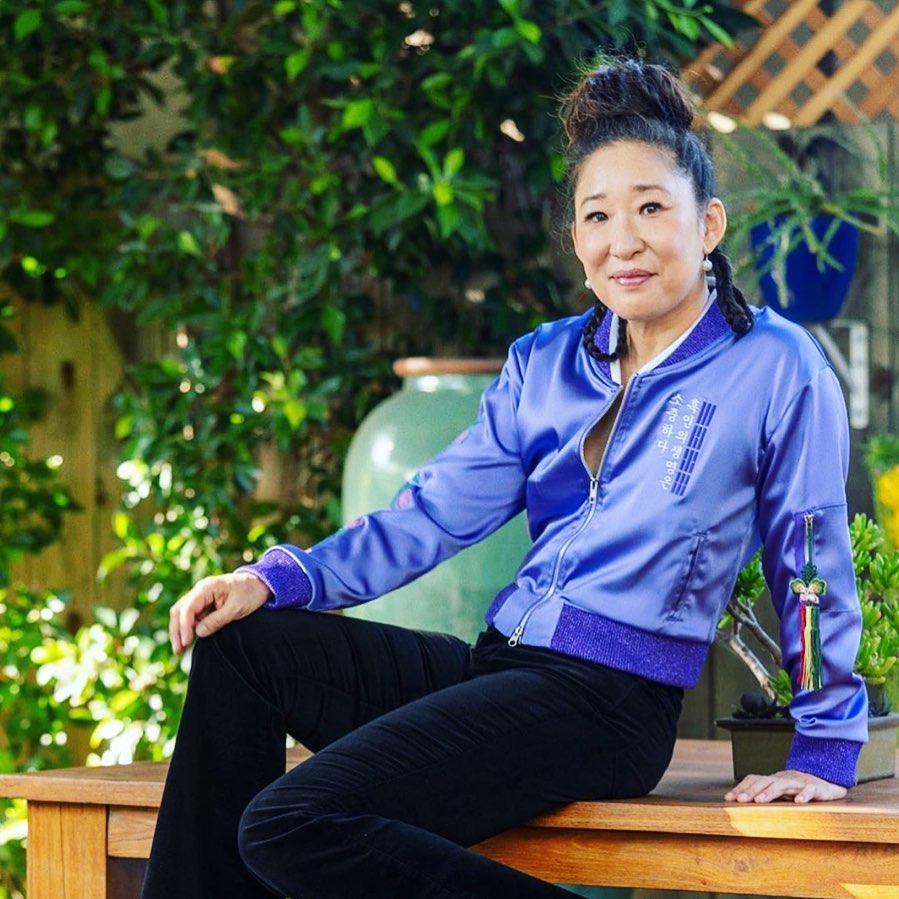 I care about Sandra Oh and I was sad that she lost out on yet another Emmy Award. She is truly the Amy Adams of the Emmys. Sandra has now been nominated for EIGHT Emmy Awards and she’s lost every time, for Grey’s Anatomy and Killing Eve. It’s rough. She has won Golden Globes and several SAG Awards though, so it’s not like she’s been blanked entirely, across all award shows.

Last night, Sandra lost again and she even had the link-up camera at home, so we saw her loser face (she actually looked happy for Zendaya, but still). Sandra’s Emmy outfit was worth discussing, because honestly, I thought more people would do what she did – wear something comfortable and meaningful rather than “glam.” Sandra wore regular old pants and a specially-made jacket and match mask in a lovely shade of violet. She spoke to British Vogue about the meaning behind the custom look.

Why she decided to have the jacket & mask made: “These are unusual times. And, in a lot of ways, it’s been an extremely creative one. We’re having to reconsider the whole system of awards shows and fashion and red carpets. Everybody’s used to having relationships and fittings with designers of a certain prominence – and this shift has forced me to reflect on who I am and how I express myself through clothes.”

On Black Lives Matter: “After George Floyd’s death and the protests that followed, I felt that as an Asian-American, a Korean-American person, I wanted to express my support for the Black community in a way that felt personal to my community. Then, a playwright friend of mine sent me this local LA brand, KORELIMITED, by the designer Matthew Kim, who had done a line of T-shirts and hoodies to support Black Lives Matter. Even though it’s really different from what you would normally wear on a red carpet, I contacted my stylist Elizabeth Saltzman and asked if it would be possible to collaborate with Kim for the Emmys.”

The customized pieces: A few emails later, and the KORE team had agreed to work with Oh on a custom bomber jacket embroidered with symbols that honour both Black culture and Oh’s own Korean heritage. (Fittingly, KORE stands for Keepin’ Our Roots Eternal.) “It’s in a royal purple colour – which is a super Korean colour and brings a certain mindset for me – and it says ‘Black Lives Are Precious’ in Korean writing, because the literal translation of Black Lives Matter is impossible in Korean. The characters have to be read top to bottom, right to left, [a traditional way of writing Korean script] and there are dashes, or taegukgi, lifted from the Korean flag, which represent celestial bodies and the natural elements and all of that good stuff. And then on the right there’s a mugunghwa [hibiscus], the national flower of Korea.”

She did her own hair & makeup: “My hair is really long now – I have Covid hair – so I’m going to try and copy some of the long braids and really elaborate hairdos from pictures. Somehow I just feel like that hair lends itself to the streetwear.”

I love this! I love that she contacted an independent streetwear company (Korean-American-owned) to make her specialized pieces saying “Black Lives Are Precious.” Kore Limited liked the collab so much, they’ve made more and they’re selling them, with proceeds benefiting Campaign Zero and Black Girls Code. The jacket is so cool too, and it’s so beautiful. Aren’t you surprised that more people didn’t take the time to get some kind of custom pieces like this made?