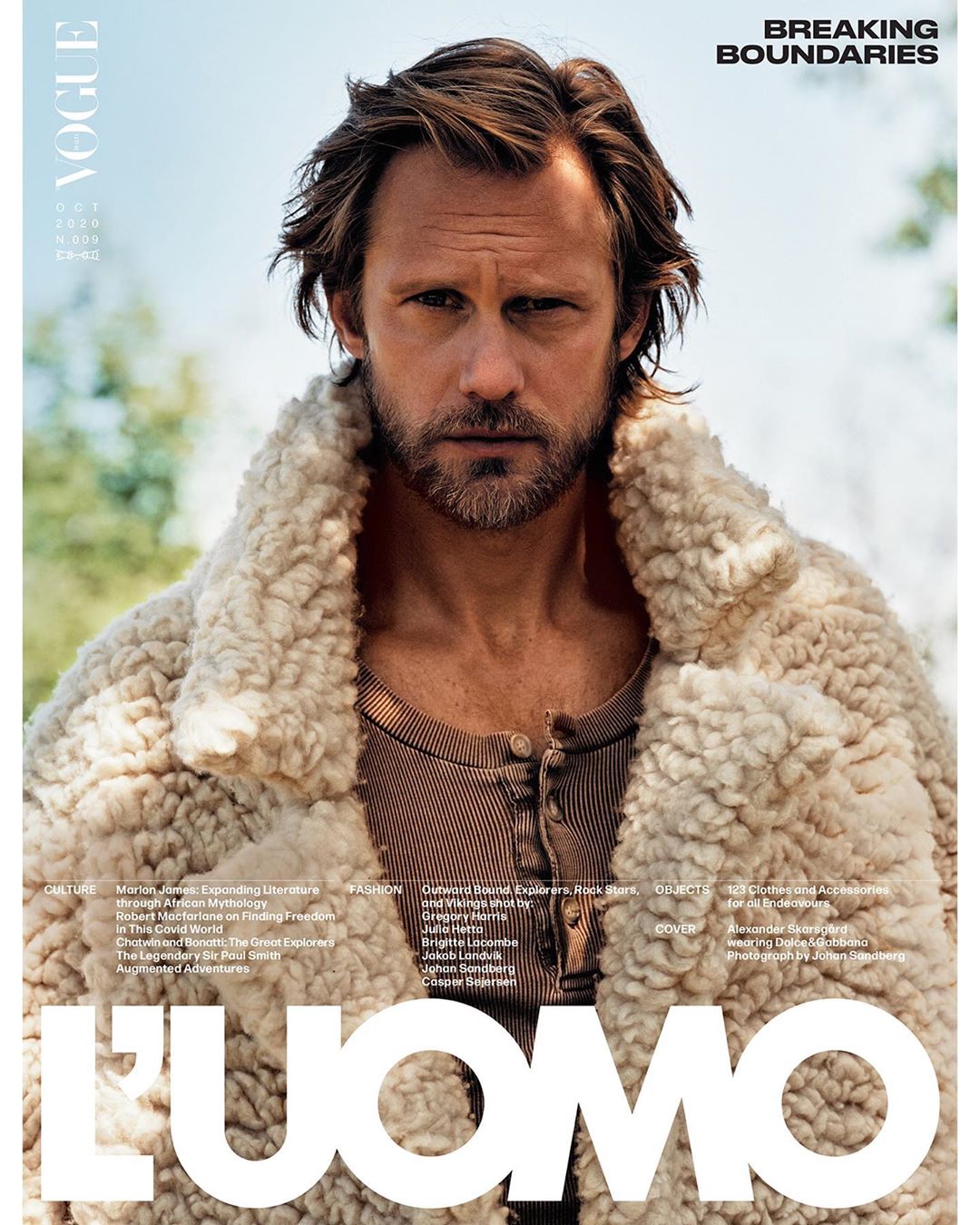 Wow, Alexander Skarsgard’s photoshoot for L’Uomo Vogue is *something*. Alex has always been a hot AF viking, but with long, shaggy hair and a muscle tee, he really looks like he’s up for anything. Alex is currently 43 years old and he’s talking about Robert Eggers’ The Northman, which is described by Vogue as a “Viking revenge story.” What is Viking revenge like? Does it involve sex with a Viking as a way of getting revenge on an ex? SIGN ME UP. As I’m reading the interview though… Alex hasn’t even filmed it! The production shut down because of the pandemic. UGH. Some highlights from Alex’s interview:

How The Northman started: “It all started seven or eight years ago. As a Swede living in America, I realised there was a certain level of fascination with the Viking era and Viking culture – and this was before any of the Viking shows that have since happened. It made me realise that there basically had never been a real great epic Viking movie made, and I thought that that’s what I wanted to do.

How he shepherded the Viking movie: “I started having conversations with a studio back then, trying to crack the best story. All I knew at the time is that I wanted to make a big Viking movie. We had a couple of potential different starting points: we had a story about two brothers, and then one about the Viking travels down to Constantinople with the Viking siege of the city. We were looking for the right story, but I never really felt we were there. I knew the scope I wanted it to exist in. But what was the story?

Meeting Robert Eggers. “Yes, like three or four years ago.We met about something else. I can’t remember how, but we started talking about Vikings. And he was, like me, a huge fan of Viking culture and of that historical era, and I immediately felt he would be the perfect guy to direct this movie. And then we found an author and poet in Iceland, Sjón, who came onboard to write the screenplay – and they did a fantastic job, just cracking the story and the essence of it. It’s a real adventure movie, but it’s much more. It taps into the culture, and the mysticism of the Vikings, it becomes more intimate and more personal. I didn’t want it to be a generic “swords-and-sandals” movie.

Production shut down on it though, because of the pandemic: “I normally live in New York, while my family lives in Stockholm. When the first wave came, I was on the fence: nobody really knew how long it would be, or what precisely was going on. So we shut down production for six weeks. The idea was to then see what would happen. I basically moved to Stockholm for four months.

Living in Sweden this year: “I had not been home for this long in… more than 20 years. It was strange. We were in a bubble; we were all healthy and safe. In a lot of ways, I had moments when I felt being surrounded by my loving family, feeling safe and loved, and taking a break from work, but then also feeling very guilty because I was, for the lack of a better term, being spared.”

I didn’t know that Alex has been in Sweden for most of the year, and I also didn’t know that this is the longest he’s been home in two decades. He really has embraced American life, hasn’t he? That’s pretty cool. Anyway, beautiful Viking, beautiful photos, and I’m glad he’s healthy and locked down.