Catherine Zeta-Jones: I would have eye makeup with me if I were stranded on an island


Catherine Zeta-ones did an hour long live pitch for the launch of the cosmetics branch of her brand, Casa Zeta-Jones. You can watch it here, on talkshop. I found it fascinating that she could sit there for an hour and talk just to the camera about makeup and her products, but I could probably do that too. I love talking about makeup, hair and skincare as you know. So much of what Catherine said resonated with me in that she doesn’t go without makeup and she loves wearing it. I’ve been like that since I was young too. She was so into makeup and talking about it and I found it mesmerizing. I came away wanting to buy everything, which is ridiculous but true. This woman could sell me anything.

My mom is a beautiful woman, inside and out, and always loved makeup. She literally wouldn’t put out the garbage without putting her makeup on. She had a wonderful glamour and was an inspiration to me.

My love affair with makeup started very young. My mother was very welcoming when I started to work and put makeup on. She was the first one to say ‘go on, go and get my makeup bag and make me up.’ It was something I did with my mother and I do with my daughter now. We take it in turns [making each other up].

I’m a kind of woman who thinks I need makeup and I enjoy putting makeup on. When I’m not working with some of the great makeup artists in the world, I really love wearing makeup just in my day to day life. It’s not a big drama, it’s not a big event. I put it on and I’m good to go. If I were stranded on a desert island, I would surely have to have some creature comforts. Those creature comforts would certainly be a mascara, an eye pencil or two, because I know if my eyes are on, I’m on.

I love my packaging. It’s going to be about me me, I’m usually not that bad. I want things to be seen on my makeup counter or if I’m digging into my pouch, I want bring out something that looks nice. Beautiful shiny box with beautiful gold font. It says on here Casa Zeta-Jones. Genius! You know how I came up with the name Casa Zeta-Jones? I came up with it in the sauna. Some of my amazing ideas come from the sauna when I’m sweating like a roast piglet. I wanted to use my initials CZJ and something that was my name but not really my name.

I was doing my makeup in the back of the car and [the driver said] ‘do you think we should pull over,’ and I said ‘I can do this on a roller coaster, I swear.’

She’s told that story about coming up with the name in the sauna before, but I loved hearing it again, especially when she called herself genius for her brand name! She was haughty as hell because she’s Catherine Zeta-Jones, but everything she said rang true to me and I came away from this wanting to buy her makeup. She loves makeup, she owns that and now she’s capitalizing on that like a boss. When she started talking about her eye pencils being the perfect soft pencil and non-harsh color for all eye colors I wanted them! Plus she peppered her talk with little tangents and cute anecdotes. “When you’re doing a smokey eye there has to be some light in there otherwise it gets too racoon-eyes. I love raccoons. I didn’t like the one that was on my garbage cans the other nights. I swear to God it was the size of a small bear.” She’s amazing!

I’ve said this for years, but I don’t leave the house without makeup. I’ve dated guys for months who have slept over and have never seen me without makeup. I don’t think of it as being insecure, it’s more like I know what I know what I like and I stick with that. A therapist once told me to let my boyfriend see me without makeup and I told her no because I didn’t see the point. I probably needed that advice but CZJ is helping me feel secure in my love of makeup. If only some of her extreme self esteem would rub off on me. 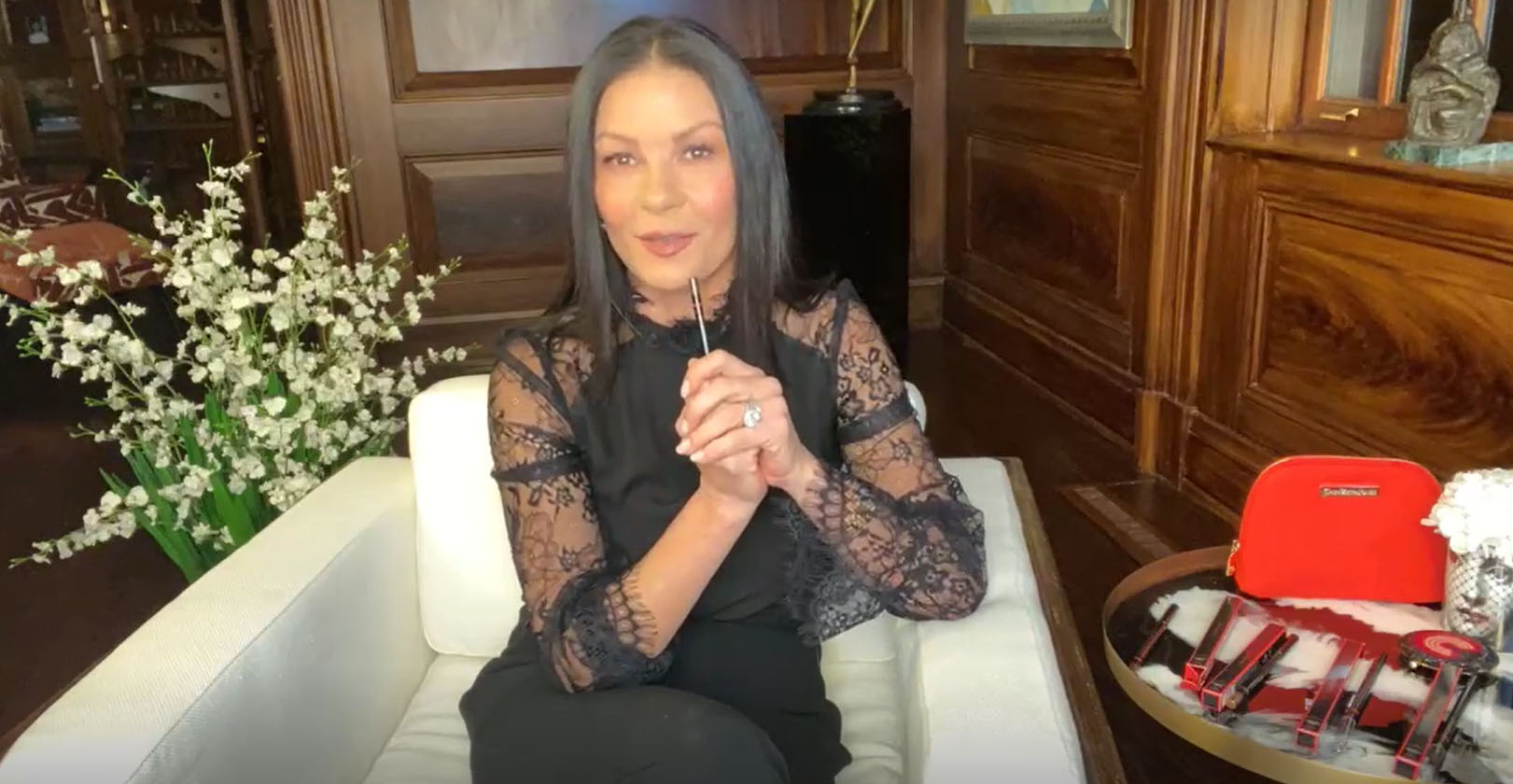 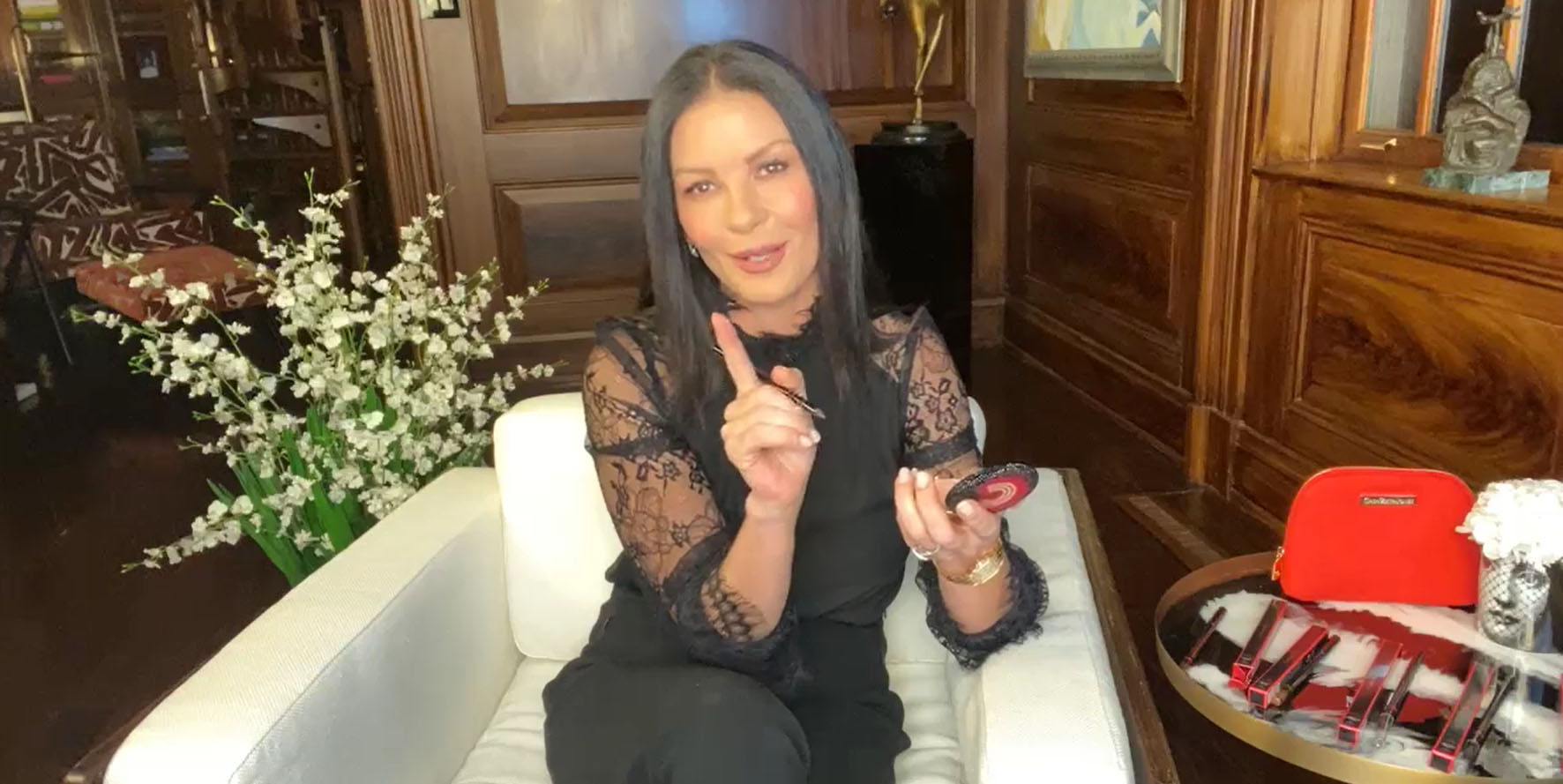 14 Responses to “Catherine Zeta-Jones: I would have eye makeup with me if I were stranded on an island”