Britney is an evil boss

Britney is getting sued by some of her former bodyguards for not paying overtime for the 24-7 coverage she demands:

Plump ex-pop tart Britney Spears is being burned by three former bodyguards, who yesterday filed suit against her for allegedly stiffing them on overtime pay. The beefy ex-henchman claim they were on call to the skinflint superstar 24 hours day, yet received nothing above their straight salaries, which ran between $2,400 and $3,350 a week.

I don’t know, I mean I usually side with the labor but 2k a week doesn’t sound bad. They probably just couldn’t stand being around her all day. 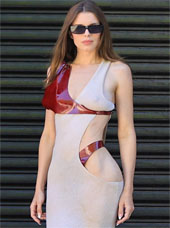