This story is funny on a few different levels. First of all, an A-list actor worth millions and millions of dollars has body odor and hygiene issues. That’s just funny on its own. But then you have to add to that the whole idea that Leonardo DiCaprio’s 22-year-old Victoria’s Secret model girlfriend would TOTALLY dump him just because of his B.O. I mean… let’s get real. Erin Heatherton is going to be supermodel now that she’s with Leo. She’s in the big leagues with Gisele and Bar now. She’s gets to front major ad campaigns. Do you think she’s going to let Leo’s stank get in the way of that?

Leonardo DiCaprio’s girlfriend is making a huge stink over his hygiene! Leo avoid underarm deodorant and daily showers in his bid to help save the planet – but his personal environment has completely turned off his gorgeous galpal, model Eric Heatherton, say sources.

Erin is nauseated by his abbreviated bathing schedule, not to mention the rancid recyclables that pile up at his house, according to insiders.

“Leo has let his love for the environment take over his whoel world, and it’s killing his love life,” a friend told The Enquirer. “He only showers a couple of days a week to conserve water, and he considers deodorant t be ‘unnatural’.”

Leo is also an avid recycler, but sources say he often misses the pickup days, and the rotting refuse results in a funky-smelling kitchen. Leo went “green” years ago, but his environmental obsession is giving Erin that sinking feeling. And that’s bad news for Leo, because it’s said he’s finally ready to settle down.

“Erin loves him dearly, but she’s starting to feel like Leo loves the environment more than her!” noted the friend. “Eric has warned him to clean up his act and his hygiene… if not, he may wind up chasing off the woman of his dreams.”

I don’t know if Leo really eschews deodorant, but I’ve read various articles about certain deodorants being not only bad for the environment, but bad for your health too. Aren’t their all-natural, environmentally-friendly deodorants, though? YEP. I’m sure that the stank still comes out, though, because if Leo isn’t bathing on the regular, there’s only so much that organic sandalwood deodorant can mask. This might also explain why Leo looks so greasy and skuzzy all the time – he actually IS greasy and skuzzy.

But Erin is still going to stick around. Until Leo dumps her. And orders another one from the catalog. 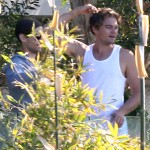