OMG. OH. MY. GOD. I’m actually stunned. Truly. We joke a lot about Katie Holmes and Tom Cruise and their contracts and contractual negotiations and one of them being an unhinged midge, but SRSLY I can’t believe this is happening. TomKat is over. OVER.

After five years of marriage, Tom Cruise and Katie Holmes are getting a divorce, PEOPLE has learned exclusively.

“This is a personal and private matter for Katie and her family,” says Holmes’s attorney Jonathan Wolfe. “Katie’s primary concern remains, as it always has been, her daughter’s best interest.”

This was Holmes’s first marriage and the third for Cruise, who previously was married to the actresses Nicole Kidman, with whom he has two children, and Mimi Rogers.

Bedhead was just talking about how Tom and Katie have been spending more and more time apart, and now this. Over the past year – especially over the past six months – there has definitely been a noticeable dip in joint public appearances by Tom and Katie. They really do seem to have been living separate lives for a while. It’s sad. It’s sad for Suri and it’s sad for Tom and for Katie. But I have high hopes that Katie finally stood up for herself and refused to be audited one more time. Don’t you?

UPDATE: TMZ got a statement from Katie’s lawyer, Jonathan Wolfe: “This is a personal and private matter for Katie and her family. Katie’s primary concern remains, as it always has been, her daughter’s best interest.” Katie’s dad is a divorce lawyer too, and it’s believed that Tom and Katie did have a pre-nup.

UPDATE (From Bedhead): This divorce is going to get ugly, but it’s for a good cause; that is, the liberation of Suri from Scientology’s clutches. TMZ reports that Tom was “blindsided” by the divorce filing, and (more importantly) Katie has filed for sole custody of Suri:

Katie Holmes is the one who filed for divorce and Tom Cruise was “blindsided” by Katie’s legal move … TMZ has learned.

We know Katie filed the divorce docs in New York on June 28, citing “irreconcilable differences.” She is asking for sole legal custody and “primary residential custody” of the couple’s 6-year-old daughter, Suri.

We also know Katie is asking for a “suitable amount” of child support.

Katie also asks for a division of property in her divorce docs, although we know there was a significant prenup that is based on California law. Katie makes no mention of the prenup in her filing.

We’re told Tom “did not see this coming.” We’re told there is some “nastiness” here, evidenced by Katie’s move to get sole legal custody.

Obviously, Katie saw what happened to Nicole’s relationship with Isabella and Connor after divorcing Tom, and she’s going to do anything in her power to prevent history from repeating itself. Good for Katie! I didn’t know she had it in her. 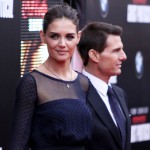