Did Joe Simpson have a year-long affair with a 21-year-old male model? As we now know (allegedly!), Jessica Simpson’s father, Papa Joe Simpson, has been secretly gay this whole time. The Enquirer/Radar ran the story last week, claiming that Joe had recently “come out” to his family, and his wife and daughters were surprised and devastated. I’ll admit that Joe had never really beeped on my gaydar – I only thought that he was rather creepy, but now that people are saying that he’s gay, the creepiness has dissipated and now I look at Joe and think, “Ah, okay, that makes sense. He was living a lie this whole time.” Deep within the Enquirer’s reporting, another detail emerged: when Joe got his DUI a few months ago, his young boy-toy was in the car! Well, now Radar has an ID on the boy-toy. Or maybe we should say “one of Papa Joe’s many boy-toys”?

A young, aspiring male model has been boasting that he has been having an affair with Jessica Simpson’s father, Joe, for the past year, RadarOnline.com is exclusively reporting. Fresh-faced Bryce Chandler Hill, 21, has been bragging about dating 54-year-old Joe on/off for around a year and has recounted torrid details of their alleged trysts to various friends around West Hollywood.

A source close to the situation tells Radar exclusively that Bryce met Joe Simpson through a mutual friend, who is very close to Joe’s daughters, Jessica and Ashlee Simpson. And the close pal says they believe that Bryce has been taking Joe for a ride and is using him just to get famous.

“Joe Simpson being outed by the National Enquirer was no surprise to the gay community in Hollywood, Bryce has been bragging about hooking up with Joe for a while now,” a source close to Hill revealed.

“Bryce is close to TJ Espinoza, who in turn is good friends with both Jessica and Ashlee and worked for Britney Spears as a back-up dancer. TJ introduced Bryce to the Simpsons – and that’s how he met Joe. Bryce claims he’s been dating Joe for roughly a year and absolutely loves to boast about it because he loves being the center of attention. He’s also been quick to tell anyone that will listen that he’s using Joe to climb the showbiz ladder.

“Bryce is desperate to become famous, he’s done lots of modeling shoots and wants to become an actor. When he met Joe, he knew what a good job he had done in managing Jessica and Ashlee’s careers and wanted a piece of the pie himself. But the sad thing is, he mocks and laughs at Joe behind his back. He doesn’t care for him in the same way Joe does about him. Bryce has been boasting about this for months, but no one believed him at first,” the source divulged.

Don’t you feel kind of sad? Doesn’t Papa Joe seem kind of sympathetic all of a sudden? Yes, he’s been living a lie for years, and yes, his family is probably devastated and confused. But Joe was taken in by some young hustler, a user and an unsavory character. Of course, we don’t know that all of this is true. But it feels true. It feels… ugh. For the record, Bryce has denied it on his Twitter, but ONTD also got some screepshots of Joe Simpson tweeting him too. So… there are no winners here.

Also, I purposefully tried to avoid using the words “rent boy” and “twink” because I’m not sure that I, a heterosexual woman, am allowed to use those words in casual conversation. Am I allowed? Discuss. I’m also including some photos of Bryce (I think?) below. He looks very, very young. UGH. 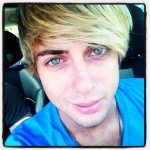 83 Responses to “Did Joe Simpson have a year-long affair with a 21-year-old male model?”