Winona Ryder: I’m ‘very proud of’ the ‘little bit of traffic now on my forehead’ A few weeks ago, we talked about Winona Ryder covering the May issue of Interview magazine (to promote her role in The Iceman) and looking devastatingly beautiful in the process. Now some interview excerpts have finally surfaced, and Winona covers several topics that she has not discussed before in a public forum.

Among the items of conversation are Winona’s thoughts on her 2001 shoplifting arrest (and the subsequent fallout) as well as her mixed feelings on the word “comeback.” In addition, Winona claims that she has never had any work done at all on her face. I am assuming that she is only referring to plastic surgery but might also be talking about Botox. This might be surprising (or even unbelievable) to some of you because Winona has always looked younger than her actual age. She’s now 41 years old, and she recently revealed that she was actually very psyched to turn 40, which is such a refreshing perspective not only for an actress but for anyone, really. In this interview Winona talks about being proud of the “traffic” on her forehead. Let’s do this: She hasn’t had plastic surgery: “It’s funny, because I went straight from the Interview shoot to this premiere, and I still had on all the makeup, and my friend told me that some people were literally saying that I’d had work done — which, by the way, I’ve found is normal hygiene now on sets. I’m not trying to knock it, but, you know, I have a little bit of traffic now on my forehead — which I’m like very proud of actually — and it’s interesting how people just instinctively are like, ‘Oh, maybe you should get something done for that.’ And it’s like, ‘Really?'”

On aging in Hollywood: “You cannot please everyone. When you start out as a kid and then you have these great roles early on and even into your twenties, you’re doing movies like Reality Bites, people want you to stay the same, but then they kind of don’t. People don’t want you to get older, but then it’s like, ‘Why do you look so young?'”

On her early career: “Looking back — and this is all in retrospect — I did have a lot of success and a lot of great opportunities earlier in my career. But I did also have this thing that was sort of happening in my late twenties where, whether it was because of how I looked or because I started so young, even though I was the right age for things, people didn’t think that I was old enough.”

On her 2001 arrest for shoplifting: “I was starting to have some trouble before that. I think a lot of people think that that is what sort of sent me off in another direction, but I was actually starting to have some trouble a few years before. And then there were also a couple of movies that I was going to do, that were all set up, and then, at the last minute, they fell apart… And with what happened . . . I was living up in San Francisco and I really needed the time off, which ended up being a couple of years. In a weird way, it was almost like the best thing that could have happened because I’d never asked myself the question before of, ‘Is it okay if I’m not going to act? Is there anything else?’ because that was all that I really knew.”

On her “comeback”: “I have to admit, though, that every time I hear ‘comeback, blah, blah, blah,’ it’s kind of hard for me. I’m not trying to be super-sensitive at all, but there is a little bit of defensiveness because I do feel like I have contributed. Even if I’d just made Beetlejuice and Heathers, I put in work.”

I think Winona sounds very wise while reflecting upon her unfortunate run-in with the law in the form of shoplifting. To her, that incident may not have been the very beginning of her troubles, but it was effectively the wake-up call she needed to take some time out from Hollywood. So she went away for awhile and worked on herself, and she came back much stronger. Wino forever! 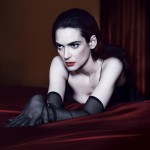 41 Responses to “Winona Ryder: I’m ‘very proud of’ the ‘little bit of traffic now on my forehead’”