Here are photos of Justin Bieber landing in Burbank via a private jet on Tuesday, and I’m pleased to see that the kid is walking in an upright position. However, there’s no accounting for anyone who will wear sneakers without socks, but I’ll settle for baby steps in Bieber fashion land. Let’s move on swiftly to the subject of this story, which involves Bieber’s antics on Instagram. Last night, I was scrolling through his page and noticed that Bieber had posted a photo of him “riding” a broom. That picture, while hilarious, has been included at the bottom of this story because something new has popped up, and it involves a photo that Bieber has since removed from the social media site. At first, I didn’t realize that the “coke” photo contained anything of a scandalous nature because it wasn’t a picture of Justin, so I didn’t click through for the full view. At the moment, I could kick myself for not taking a screenshot of the photo, but Radar Online has posted a small thumbnail of the pic, which shows one of Justin’s friends holding a baggie of white powder with Bieber’s caption, “@poobearmdma whatcha got in your hand.”

Who is this guy? Introducing “Poo Bear” on the right of this picture, which I found linked via the Poo Bear MDMA Twitter account. The guy in the back of the photo is Richard Perry, owner of Barneys. Silly me, I thought it was Anthony Weiner, who really would make for a great Bieber candid. Anyway, this is a photo of Justin and Poo on Perry’s private jet. Poo (such a gross nickname) is currently touring with Justin, and they are shown here together in Detroit. Here’s the story from Radar Online about the drug-baggie picture that Justin yanked from Instagram. Mr. Poo has quite the history of drug connections: For months, Beliebers and casual observers alike have criticized Justin Bieber‘s choice of company. His BFFs Li’l Za and Li’l Twist have wrecked his cars, been arrested for DUI and just generally seemed like they might not be the best influences on the increasingly out of control star.

But RadarOnline.com has exclusively learned that one member of Justin’s inner circle could be a much more dangerous – and even deadly – friend. Justin’s friend Jason Boyd, known to Beliebers by the innocuous name “Poo Bear” is pals with dangerous international cocaine smugglers.

On Monday, Justin posted a picture on Instagram of Boyd holding what appeared to be a small baggie of white powder and captioned the shot, “@poobearmdma whatcha got in your hand.”

Fans were quick to accuse Boyd of holding “cocaine,” “molly,” and “marijuana,” but whatever he was holding, commenters seemed more disturbed by the fact that Justin, 19. would even joke about possibly being near drugs.

User @alija_xoxx wrote, “Justin take that … and throw it away …”

RadarOnline.com has learned that his fans could have reason to be concerned, because Boyd’s own BFFs aren’t bratty teens, but international drug smugglers.

Earlier this year, Boyd posted a series of Instagram shots from a trip to Suriname — a South American nation that is a notorious hub for cocaine smugglers. As far back as 1992, U.S. officials warned of the country’s growing problem in an official report and warned, “There is no question in the view of the U.S. government that there is significant army, and probably some police, involvement in narcotics trafficking in Suriname.”

And during Poo Bear’s trip to the troubled country, he happily posed for pictures with a man known as “Jungle Commando,” former rebel leader Ronnie Brunswijk, who has also been convicted in absentia of smuggling cocaine into the Netherlands. Like the nation’s president, he has never served jail time.

During his time with Brunswijk, Boyd also posed with a 100-round-clip semi-automatic machine gun, went on a tour of the jungle with Brunswijk and Suriname’s Vice President, Robert Ameerali, and smelted large bricks of 24k gold – not your typical tourist activities.

Besides the drug connections mentioned above, Poo Bear also goes by the nickname “MDMA,” which he claims (via his Twitter) stands for “Most Devoted Musician Alive.” Right. I think that Justin yanking the white-powder photo from Instagram proves that it’s only a matter of time before Biebs gets busted with drugs in hand. So far, he’s been lucky enough to not be on his tour buses whenever they get busted for pot, but Bieber’s luck will soon run out.

Don’t even ask me about this broom photo. I just want to laugh at it. 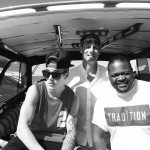 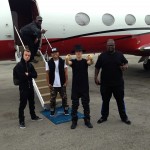 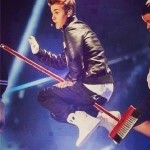