Alan Rickman, 67 years old, wears all-black in Venice: would you hit it? Many of you always claim that you need more Alan Rickman in your lives, so let’s test that theory. Alan was in Venice yesterday to promote his new film, A Promise, with Rebecca Hall and an odd-looking Richard Madden (Robb Stark from GoT). Rickman posed at the photocall and the premiere, wearing all black for both appearances.

So, would you hit it? Alan is a Forever Dong for many of you, from what I understand. I still remember the first time I ever saw Rickman in anything – Die Hard. Rickman gave one of the best “villain” performances of all time, and if you’re interested, I’ll tell you a bit of Hollywood trivia: the producers hated him. They thought he was doing an awful job and they almost replaced him mid-production. But Bruce Willis and director John McTiernan stood up for Rickman – Willis in particular thought Rickman was doing a great job. And so Rickman kept his job and the rest is movie history. 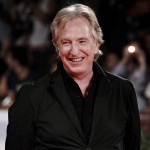 165 Responses to “Alan Rickman, 67 years old, wears all-black in Venice: would you hit it?”