Chris Pratt used to be a stripper: ‘I was very free, so I thought, I may as well get paid’ This ^^ is a selfie Chris Pratt took and posted on his Instagram earlier this year. Chris spent much of 2012 falling into a vat of M&Ms, cheese fries and cake, and then he quickly took the weight off when he got a role in Guardians of the Galaxy. Chris is currently promoting Delivery Man, that sappy-looking comedy where he plays second fiddle to Vince Vaughn, and Chris gave a new interview to Buzzfeed to promote the film. I also just glanced through some photos of Pratt at the premiere a few nights ago, and I guess he’s gaining weight again. For “comedy”. Anyway, this Buzzfeed piece is good – Chris talks about his past as a stripper, why he gained the weight last year (and how it affected him) and lots of other stuff. You can read the full piece here, and here are some highlights:

His stripper past: “I was always a very much naked person. I loved to always get naked. I was very free, so I thought, I may as well get paid… I was never like Magic Mike, you know. I did go one time and audition on a stage for a club, but I don’t think I got the job. I don’t think I’m a very good dancer.”

Other odd jobs: “I cleaned peoples’ cars, painted murals, worked for my dad, worked at a burger joint, was a room service waiter, worked at the snack bar at a bingo hall. I babysat and mowed lawns; I picked blackberries and sold them. I was always very enterprising as a kid. I was always trying to find some way to make money.”

The premise of Delivery Man, which has Vaughn’s character fathering 500 children, all from hundreds of sperm bank donations: “That’s totally reasonable. If I only gave a quarter of my sperm donations to a clinic, I could still do it. In my late teens and early twenties? Oh jeez, you could have taken that much sperm out just by doing my laundry, or cleaning my sheets and laundering my socks… If I thought about it, I would have made a fortune myself.”

Putting on 60 pounds to play second fiddle to Vaughn: “What I wanted to sell with this character was his sense of despondency and desperation. He’s a guy who’s stuck with four children at home, and often times, we wear our insides on our outsides. This is a guy who’s talking about how much he dislikes children, and how much he dislikes being a parent, and trying to discourage David Wozniak from becoming a parent. And if I was in good shape, and saying those things, I had a sense that it’d come off as being less likable. Saying those things gives off a sense of confidence, a sense of brashness, or even potential arrogance. But, if his insides are revealed on the way I look on the outsides, there’d be a sense of irony and a sense of likability.”

He weighed 295 pounds (his goal was to weigh 300 lbs): “By gaining a s–t ton of weight, I affected not only the way I looked, but also that rhythm. I felt terrible. I felt mentally dull. I felt that I wasn’t fulfilling my duties as a husband in the bedroom. I felt no sexual desire. I felt really, legitimately depressed. And it wasn’t the first time I’ve been big through the course of my life. I’ve always been just teetering on that scale and I’ve been bigger for different roles. And when I’m big, I have body image issues just like anybody else.”

I get a very quiet pleasure when men admit that they have moments of feeling what most women feel on a daily basis. Does anyone else get pleasure from that? Like, I love when a dude talks about obsessing over calories or how he feels fat or even how he feels objectified. It’s like, join the f—king club, dude. I made t-shirts. THIS is what women deal with on a daily basis. I always hope that the men who deal with these kinds of issues will have a greater understanding into the female experience. But who knows.

And while I see Chris’s point about wanting to look schlubby for this film, it also feels like… ugh, he was just doing it for a cheesy Vince Vaughn movie? It’s not like this is awards season fare. It’s just a silly Vince Vaughn comedy. I guess we’re supposed to think he’s just so committed and Method. Is that what you think? 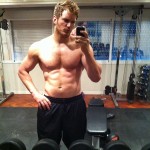 46 Responses to “Chris Pratt used to be a stripper: ‘I was very free, so I thought, I may as well get paid’”