I was really, really hoping that Charlize Theron and Sean Penn would come to the Oscars together. I knew Charlize was presenting, and I just thought – “Hey, that would be really interesting to see them make their red carpet couple debut at the Oscars!” But it was not to be. Charlize brought her mom Gerda to the Oscar ceremony, then Charlize was strangely absent from all of the major after-parties. No Charlize at the VF party, no Charlize at Elton John’s shindig. So, did she just go home with her mom? Of course not. She dropped Gerda off and then Charlize joined Sean Penn… at Madonna’s Oscar party. Partying at your boyfriend’s ex-wife’s Oscar party? Oh, dear. And it totally gets worse:

Leave it to Madonna to be a good sport. As per tradition, the pop legend, 55, hosted her annual Oscars after-party on Sunday, March 2 at the L.A. mansion of her manager Guy Oseary, with festivities raging from 10 p.m. to around 6 a.m.. Among the night’s many, many A-list guests were her ex-husband Sean Penn and his girlfriend, Charlize Theron.

Fellow Oscar winners Penn, 53, and Theron, 38, were “making out like crazy” and “all over each other” on the dance floor, an observer at the bash tells Us Weekly. “They were the talk of the party — even Madonna noticed!” Penn and Madonna divorced way back in 1989; she eventually married and divorced Guy Ritchie, while he divorced Robin Wright after 14 years in 2010.

Still, the former couple’s four-year union was passionate, and the Material Girl’s close pal Debi Mazar recently quipped that Penn remains Madonna’s “one true love.” Over the years, Penn was supported his ex-wife at concert performances, and she recently joined him in Haiti on a humanitarian project.

Past 2 a.m., “Madonna was dancing up a storm with her kids Lourdes and Rocco on the dancefloor,” the observer says. “She kept walking around the party trying to get everyone to dance.

Ordinarily, I wouldn’t even think “Poor Madonna” about anything. Madge does not need anyone’s sympathy. Madonna sees empathy as weakness. The Gristle will crush your sympathy!! But I felt a wave of sympathy for her here. I believe that Madge and Sean Penn still have unfinished business with each other, and it feels… cruel? Like, Sean and Charlize could have gone to any after-party. But they went to his ex-wife’s party and they made out like crazy and Madge “noticed.” Must have been hard. Or maybe I’m just projecting. Even if you know intellectually that you shouldn’t be with someone ever again, there’s still some residual stuff. And Charlize… well, she’s tall, young, beautiful and making out with Madonna’s ex-husband, the man Madonna once called the love of her life. Rough stuff. 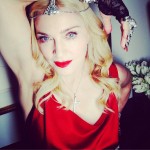