Macklemore is obsessed with his kitten, Cairo: does this make you like him more? We haven’t discussed anything involving Macklemore since he dressed up as some kind of weirdly anti-Semitic caricature during a show in Seattle back in May. I guess he was keeping his head down and letting the controversy blow over, which isn’t the worst crisis management. I actually prefer the whole “issue a lengthy statement explaining how you were wrong and then STFU for a few months” school of crisis management.

I also enjoy when celebrities blatantly use their pets to make people like them more. Two months ago (around the same time as the anti-Semitic thing), Macklemore adopted a kitten with his long-time girlfriend. The past two months have been filled with endless cat love from Macklemore. He is a Cat Man. And Cairo the tabby has stolen his heart. Not content to simply post endless photos and videos of Cairo on his Instagram page, he also made Cairo her own IG.

So, yes… this is just a post for photos of Macklemore and Cairo. And I love it. And nothing says “all is forgiven” like a man in love with a cat. For her part, Cairo seems like she’s enjoying her new place as the most important person in Macklemore’s house. Just so. 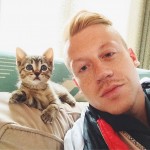 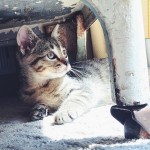 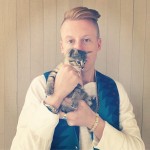 98 Responses to “Macklemore is obsessed with his kitten, Cairo: does this make you like him more?”