I haven’t written about Britney Spears in a while. That’s not by design, it’s just that Britney has been relatively quiet for several months now. She started dating Charlie Ebersol last fall (around Halloween), and it seems to be going well. He’s not crazy-shady (although there are some whispers that he’s not 100% authentic), he comes from a good family, he’s got his own career and while Daddy Spears totally signed off on this relationship, it doesn’t feel like Daddy Spears is outright paying this guy to be with Britney. I’m including some photos of Britney and Charlie from her Instagram – as you can see, Charlie is around her sons too. And all of a sudden, Jayden and Sean look so big!

Anyway, Britney spoke to Extra this week – you can see the video here. She actually doesn’t seem too out-of-it. I think maybe her meds were adjusted? She seemed sharper than usual. She was asked about wearing an “I Love Charlie” vest during her Vegas performance and what Charlie’s reaction was: “He said, ‘You’re the sweetest girlfriend in the whole world,’ he was really happy I did that… I’m very blessed to have him as a part of my life.” She was also asked if there was a chance she could head down the aisle with Charlie and she said “You never know!” So there you go. I kind of think Britney is just in love with the idea of marrying someone, anyone, and maybe having a “normal life.” Is Charlie that guy?

Meanwhile, Britney lost a clump of weave during one of her Vegas performances last week. Poor Brit-Brit. 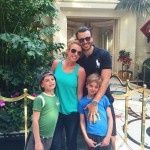 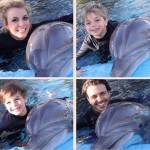