Happy birthday to my sweetest Minnie Mouse! Thank you Disneyland for the most amazing day! I will post more pics later today was a busy day!

I sort of forgot that North West’s second birthday was yesterday. Happy b-day, little North. To celebrate, Kim Kardashian and Kanye West did something surprisingly normal: they took North and half the family to Disneyland. I have mixed feelings about having such small kids at Disneyland – I tend to think the Disney attractions are best enjoyed by kids 5 years old and up – but I’m sure most of the kids found interesting stuff to do.

Apparently, Kim and Yeezus did assemble a pretty big family crew for North’s Disney birthday. Also on hand: Kourtney Kardashian, Kylie Jenner, Tyga (ugh), Tyga’s son King Cairo (ugh) and Kourtney’s kids Mason and Penelope. As you can see in the photos below, Kanye was even enjoying himself so much that he actually SMILED. In public!

Meanwhile, a tabloid reports that Kim and Kanye have invested in $300-a-session “big sister classes” for North. They want North to be prepared for her new sibling(s), so “Kim has signed Nori up to big sister classes. She will have one-on-one sessions, as well as group classes. Part of the sessions will involve playing with dolls.” Sources also say that even if Kim is expecting another girl, their second girl will not be wearing North’s hand-me-downs. Of course not. Any Baby Kardashian-West will have a million-dollar wardrobe, full-stop. 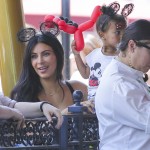