A few days ago, Jennifer Lawrence and Chris Martin reportedly called it quits for the second time. The story came from Us Weekly and seemed legit, like the relationship had simply run its course. JLaw was acting bizarre in front of the paps with her drawn on-moustache and chopstick waltz, and Chris was hanging out with Kylie Minogue. A few days ago, Chris showed up in Delhi and played an impromptu bar gig. But he managed to fly stateside for the weekend, where he and JLaw enjoyed a romantic Fourth of July together. Huh?

Jennifer Lawrence and Chris Martin put reports that they had broken up to rest as they spending the Fourth of July weekend together in New York City, a source tells PEOPLE.

Lawrence, 24, and Martin, 38, were spotted walking near Central Park in Manhattan on Friday, July 3.

“They were walking arm-in-arm, in a hurry it seemed,” a source says. “It looked like they were dressed for date night.”

I find it interesting that People is doing the “just kidding!” reporting on this breakup. People is the same magazine who dished on the couple’s first split. Then they shuffled backwards when JLaw and Chris were soon spotted together again. Maybe People’s thrilled that Us broke the breakup news this time, and the story wasn’t true.

Did JLaw and Chris arrange a swift holiday meeting to counteract the latest split story? Who knows. He did fly back from Delhi in a hurry, but maybe their weekend was planned. Someone saw them hanging in NYC and tweeted the news.

Just saw Jennifer Lawrence and the dude from Coldplay riding their bikes lol!

This lucky non-Coldplay fan further tweeted that JLaw and Chris were “at Battery Park.” 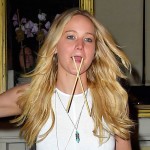