I’ve actually been pretty wary of covering this Gwen Stefani-Blake Shelton stuff. Even though I truly believe they’re together and they’re bangin’, I also think there’s a serious whiff of corporate PR here. What I mean is that one side doesn’t negate the other. You can believe that Gwen and Blake are really happening AND that NBC is beyond thrilled about it and NBC is “massaging” these stories to promote The Voice. The sheer volume of stories suggests that this relationship is being “rolled out” by publicists too. Anyway, here are some of the many, many stories about Blake and Gwen, aka Blen/Gwake/Shelfani/Stefelton.

Gwen covers the December issue of InStyle. I’m not entirely clear when the interview was conducted (likely more than a month ago), but it doesn’t seem like she was giving a wink to the readers about her relationship with Blake. She talks about how motherhood changed her, how difficult it is to be a working mom and all of that – you can read some highlights here.

Gwake were already photographed holding hands. You can see the photos here. The pics were taken in Nashville last week. Blake flew out to Nashville for the CMAs, and he brought Gwen. Their publicists confirmed the relationship two hours before showtime, although Gwen did not go to the CMAs. She apparently came to Nashville just to hold hands with Blake and attend the Warner Bros. after-party. They flew in and out together and just a few hours after the after-party, they were on the plane back to LA. The big hand-holding, coupled-up thing is being called “carefully choreographed.” Like, no one cares if we know that their publicists are orchestrating a lot of this.

Blake Shelton is a positive person. Blake and Gwen have been friends for about a year or whatever and they grew close as friends very quickly. “Sources” told TMZ that Gwen “was attracted to Blake Shelton like a magnet, because he resurrected her self-esteem.” Apparently, Gwen felt beaten down because Gavin Rossdale is a “control freak” who “said disparaging things to keep the upper hand in the relationship. Our sources say Gwen complained Gavin had an issue with her parenting skills and criticized her for not being a supportive wife.” So Blake’s friendship – and more – really helped Gwen, because he just “made her feel good again,” and by simply being fun.

Gavin Rossdale is suspicious. That’s what TMZ says. Their sources claim that Gavin is suspicious about the timing of Gwake’s relationship and that Gavin might believe that MAYBE Gwen and Blake were making trips to the boneyard before Gavin and Gwen’s divorce. Or, as TMZ wrote: “Sources close to Gavin tell us he smelled something was up between Gwen and Blake before their marriage blew up. We’re told he does not believe the timing of his divorce with Gwen and Blake’s divorce with Miranda Lambert is coincidental.” Gavin is also butthurt that “sources” are trying to paint him as a control freak and a negative guy, especially since Gwen “browbeat” him into staying home with the kids for fear that if he went on tour, he would cheat on her. There’s even more at this TMZ link.

Basically, this whole mess is ratings gold, I’m absolutely sure. While I don’t blame Gwen whatsoever for moving on with Blake, I do side-eye her a little bit for participating in this media campaign. Of course, I’m also side-eyeing Gavin for getting TMZ to publish that hit piece about Gwen being the alleged cheater. I mean… come on! Is anyone buying that version? 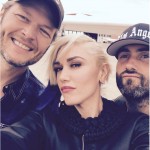