Sofia Vergara and Joe Manganiello got married on Sunday in Palm Beach, Florida. If I’m being honest, I’m a little bit surprised that the wedding went off without a hitch. I expected them to have the big wedding of course, but I thought there would be more drama around it. But it seems like Joe was marrying his dream girl and Sofia was marrying the only boyfriend she’s had in a decade who isn’t bothered by the fact that she’s a big deal. There are two things that make me love Sofia and Joe’s wedding: one, they weren’t stingy with the social media photos at all (Sofia Instagram’d everything) and two, they asked for charity donations in lieu of wedding gifts. That, to me, is classy, especially from rich Hollywood people.

It’s official: Sofia Vergara and Joe Manganiello are married! The gorgeous couple tied the knot Sunday during a romantic wedding at The Breakers Resort in Palm Beach, Florida. The ceremony began at 7 p.m. in front of gathered guests, which included Vergara’s Modern Family costars, Reese Witherspoon and Channing Tatum.

Vergara, 43, who recently admitted she had a little bit of “bridezilla” in her and is very detail-oriented, pulled out all the stops for the nuptials. The festivities included a weekend full of fun, including a pool party, a sumptuous rehearsal dinner and a pre-wedding bash that included Manganiello serenading his bride-to-be with “Sweet Child O’ Mine.”

At the Sunday ceremony, Vergara wore a custom Zuhair Murad Couture design as she walked down the aisle. The ceremony was indoors, inside a small area decorated with white roses, orchids and hydrangeas. The actress went without a veil and carried a bouquet of orchids.

Instead of exchanging the typical “I dos,” the couple instead said “I will” in front of a minister and members of the wedding party read passages from the Bible in both Spanish and English. Vergara and Manganiello also recited their own vows. The emotional ceremony included a lot of laughter and happy tears from the guests.

The Pittsburgh Children’s Hospital is for Joe – he grew up in Pennsylvania. As for the bride’s custom Zuhair Murad… the silhouette is basically the same as half of her red carpet gowns, but that’s what she’s comfortable in, so God bless. She looked very pretty! Congrats, Sofia and Joe! 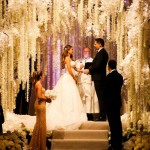 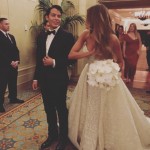