George and Amal Clooney are doing fine. I didn’t know that was up for debate, but People Magazine just wants to remind you: they’re fine. Amal is pregnant with twins and she’s due… in a few months, I think? I’ve heard that she’s due in May and that is possibly true, but if so, she seems to be carrying very small, especially for twins and especially for her first pregnancy. Personally, I think George was fine with his child-free life before Amal and I wonder if he’s really prepared for how much his life is going to change once the babies come. But still… People Mag wants you to know that he’s fine. They’re fine. They’s “completely, fully in love.”

George and Amal Clooney seem to be savoring their last few months of peace and quiet before the Clooney household gets much livelier this summer, when they’ll be welcoming twins. The couple looked happy and relaxed as they strolled hand in hand near their manor in the English countryside on March 31.

In February, the couple enjoyed a trip to Paris for the César Awards, where George was honored. While in the City of Love, they had an intimate candlelit dinner at the historic restaurant Lapérouse. Restaurant owner Grégory Lentz, who has known George, 55, since 2011, tells PEOPLE, “Amal is amazing. She is just lovely. He’s happier than I’ve ever seen him.” Lentz adds, “They’re completely, fully in love.”

While in Paris, they also made time to do a little shopping for the twins at Baudou, a boutique specializing in handmade layette and stylish nursery furnishings.

During their 20-minute stop at the shop, a staffer told PEOPLE, Amal, 39, “was looking exclusively at cribs and nursery furniture” and George was “very nice, really simple, very easy. He was in jeans and a jacket, like any other expectant father we see on the weekend.”

Is it just me or is this very “NOTHING TO SEE HERE, FOLKS”? I’m not saying I believe George and Amal are having issues. I’m not saying anything like that. In fact, I think they’ll be together for a while. But I just think George is having a hard time adjusting to his new Family Man role and much like Ben Affleck (only in Affleck’s case, it’s much more obvious), George has itches he needs to scratch, you know? It’s almost like a case of “be careful what you wish for.”

Oh, and Matt Damon gave an exclusive interview to E! News about how George is no longer the “prankster” on set – go here to read the piece. I mean… I know we were supposed to think it was so cute and funny, but George is 55 years old. I would hope that he is tired of on-set pranks at this point? 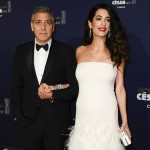