So proud of this beautiful kiddo! Congrats to our Mas Man for graduating 8th grade! So blessed to be his stepmom and forever cheer him on. #graduation #8thgradegraduation #throwbackthursday #aboutlastnight #stepsonlove #family #stepmom #proudstepmom @eddiecibrian ❤ @ronnykobo

I’m always a little bit stunned whenever I do look at LeAnn Rimes’ Instagram. She always includes so many photos of her stepsons, which… I do not believe she should do, first off. It’s not her place to throw her stepsons all over her social media, full-stop. But I’m always a little bit stunned because I’m startling to realize how big Eddie and Brandi’s sons have gotten. This sh-t has been going on for EIGHT YEARS. Mason is taller than LeAnn now. Mason just graduated from 8th grade – I would imagine this was his middle school graduation – last week, and his parents all came out. Brandi was there, as were Eddie and LeAnn. LeAnn made sure to post a bunch of photos, and Brandi posted one, of herself and her two sons, even though Brandi did bring her boyfriend, DJ Friese, to the graduation. According to the Daily Mail, Brandi and DJ kept separate from Eddie and LeAnn. Here’s one of LeAnn’s many social media posts devoted to her stepson’s graduation:

Ugh. What could have been a fragile truce at a kid’s graduation basically became a classic LeAnn stalker thing, where she had to “prove” that she’s closer to her stepsons than their own mother, all via social media posts. No wonder Brandi has been trashing LeAnn so much lately.

Meanwhile, I totally just learned that LeAnn has a blog called Soul of EverLe. Did you know this? I truly did not. That’s why she’s been using “lovE” so much – she’s trying to make it part of her blogging and musical brand, this love-spelled-with-a-capital-E thing. Anyway, a week ago, as the Brandi-Eddie thing was heating up, LeAnn wrote a post called “Hate the Hate, LovE the Hater.” She’s not subtle. She thinks Brandi is just a hatEr who needs lovE. You can read the post here. LeAnn thinks she’s being so clever and manipulative. She is not. My little men! Somebody is getting ready for high school 😰they grow so fast enjoy them while you can! 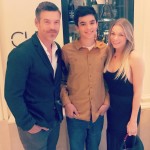 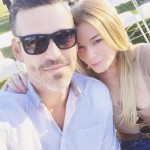