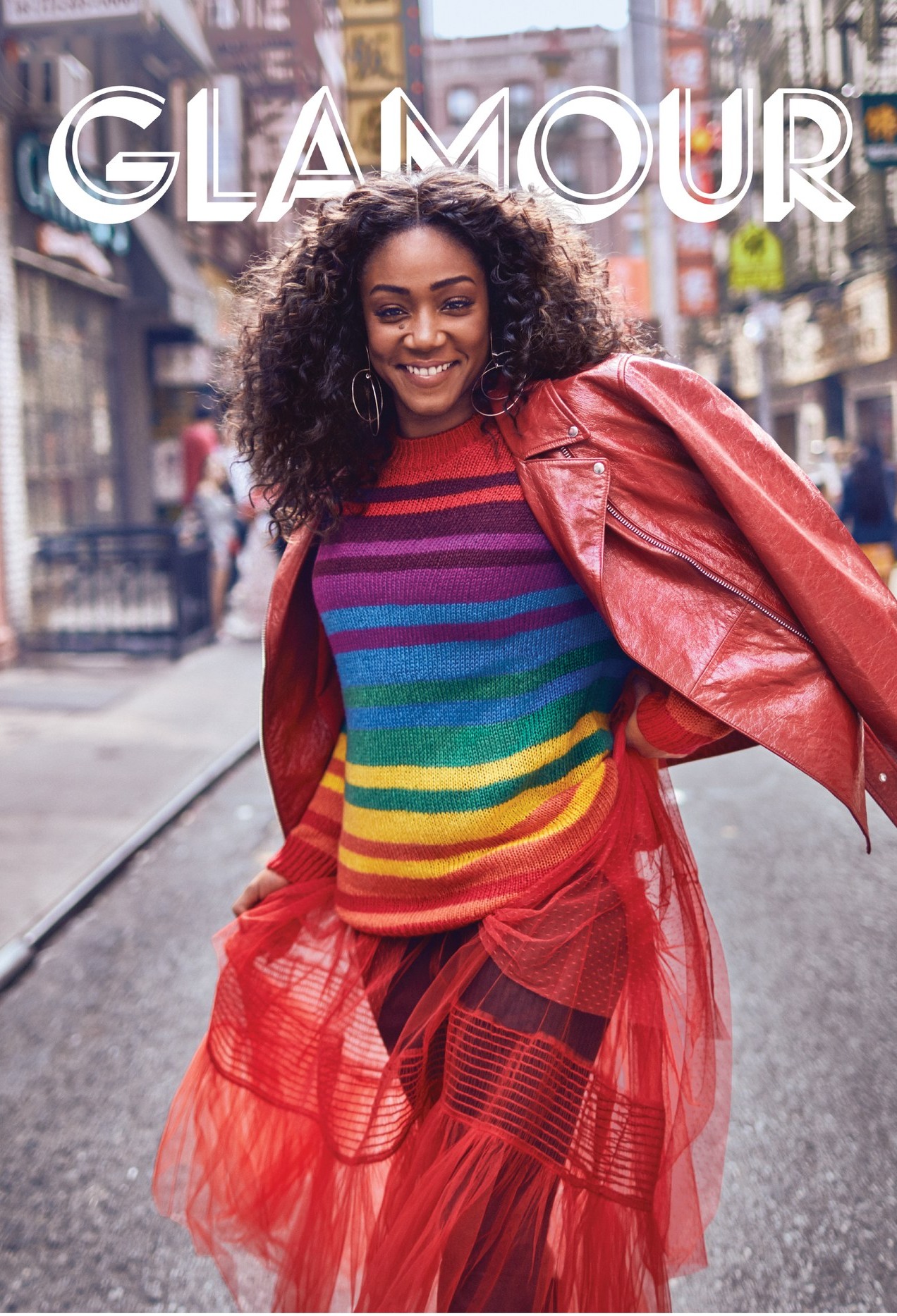 Tiffany Haddish is a treasure and I won’t hear one word otherwise. Tiffany covers the September issue of Glamour, where she’s promoting That Dunkirk 2: Dunkirkier (I WISH). No, she’s promoting Nobody’s Fool and Night School, both of which are coming out in the next few months. Tiffany is a great interview, and you can just tell that she’s spent years in obscurity, reading other celebrities’ magazine profiles, and she knows what to give a magazine journalist to make her cover story “pop.” I’m not saying Tiffany is affected – she’s not, at all. But she’s a natural comedienne and a natural storyteller, and she enjoys these kinds of long-form pieces, where she can really have the space to tell stories. You can read the whole glorious piece here. Some highlights:

She dreamed this life for herself: “My opportunities are whatever I create. My thoughts from two years ago is what’s happening right now. I really think my thoughts are my magic wand.”

On Sanaa Lathan being the woman who bit Beyonce: “I didn’t confirm sh-t. The reporter was like, ‘Sanaa Lathan?’ I’m, like, three drinks in, so of course I was about to laugh. They thought I put her name out there, but I didn’t. I never said nothing. And Beyoncé didn’t say nothing. Let the person who [bit Beyoncé] bury themselves…. I ain’t trying to destroy this girl. I didn’t say sh-t about the girl.”

Whether Tyler Perry’s films perpetuate black stereotypes: “I just think that a person is ignorant when they say, ‘Oh, you’re being a stereotypical black person.’ Well, what’s that? Explain that to me, because that’s an actual person, and everybody deserves to see themselves onscreen. I feel like all facets deserve to be seen—from the doctors to the janitors to the baby mamas to the side chicks. It’s funny because people are like, ‘Oh, Tiffany Haddish is ratchet.’ No, I’m your typical chick from the hood. And as ratchet as I might talk, or people might think I carry myself, I am making a living portraying myself.”

Being raped by a police cadet at 17 years old. “That whole experience put me in such a messed-up place for a long time, and I ended up going to counseling,” she tells me, her voice breaking. She says she reported the incident at the time but still grapples with what justice would look like for her. “Me just yelling out people’s names with no thought behind it is pointless. I need a plan. I could be a voice, but what’s a voice going to do—just keep talking? Or is there action behind it?”

Whether she’s dating anyone: “I don’t really have time. And I’ve had enough somebodies. I done ran through 38 dudes, OK? Body count, yeah. Mine is 38. Write it down. Let them know. I’ve had 38 experiences.”

She’s supporting her family: “I’m just glad I got some money now, because now I can do a better job at taking care of them. I got my mom out of the mental institution, like I said I would, in December, and I got her an apartment with my sister and a nurse that comes to her. I ain’t never said this out loud, but I want to be able to give every one of my siblings a million dollars to create whatever they want to do. That’s four million dollars that I don’t need.”

Name another woman who would tell Glamour Magazine her “number,” I dare you. Your number is for your closest girlfriends. Maybe you don’t even tell your number to the 39th guy you’re banging. You just lie and say “I don’t know, maybe… eight?” Just to see his reaction to that. The rest of it… she breaks my heart in one breath and in the next, I’m actually laughing out loud. She’s the best. And I love what she says about representation and how she’s out here, representing for-real ratchet girls.

This is hilarious too. If she was in Carrie’s Manolos, she would have gotten turnt at the reception and banged Mr. Big’s cousin. I LOVE HER.