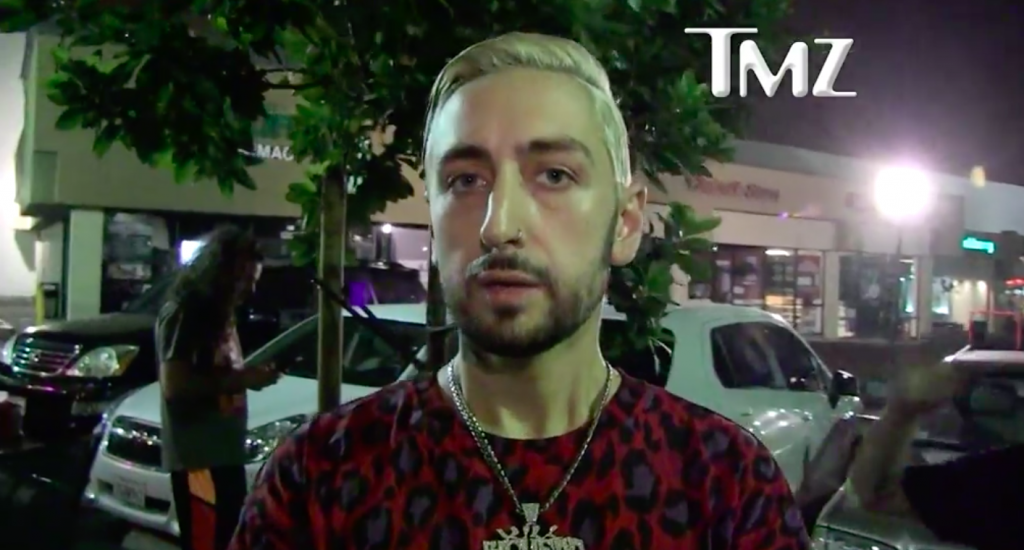 Demi Lovato is thankfully still in rehab and will be for some time after a near fatal overdose late last month. One of her friends administered the rescue drug Narcan and she survived and was rushed to hospital. It’s been unclear up until now what Demi took, although her people insist it wasn’t heroin. We know now what she took because the guy who supplied her drugs, Brandon Johnson, told the paparazzi during an impromptu street interview. Apparently Johnson got the pills from Mexico and they weren’t typical pharmaceutical opioids, they were likely laced with fentanyl, although he’s unsure about that. Johnson warned Demi that they were “aftermarket” and not pharmaceutical pills, but she took them anyway. Here’s what he told TMZ, and he even dished about having a sexual relationship with her. You can see the video there. He’s wasted and he’s a dirtbag.

When you first started hanging out with Demi was it as friends?
It was a flirty friendship but nothing more. It kind of grew into more of a sexual friendship. You know, we were just hanging out. Later on in the relationship we messed around. For the most part we were just friends.

When she texted you at 4 in the morning was it for you guys to hook up, hang out?
She texted me at 4 o’clock in the morning because she’s a girl and she wanted to kick it.

What happened that night?
We hung out, we watched our detective shows. She sometimes has such long days, stressful hours. Unwind a little bit.

Did she know what she was taking that night?
100% she knew what she was taking. I disclosed to her that these are not pharmaceutical, they’re aftermarket pills. They’re much stronger. She understood fully. It was unfortunate what happened, but for people to think that there was any misconception on my behalf is absolutely ridiculous. I’m not here to hurt anybody.

When I showed up she was a little drunk. Nothing out of the ordinary.

When you left was she asleep?
It happens all the time. We hang out, we do whatever she needs to do and she ends up passing out. It was already 7, 8 o’clock at that time. So she passed out and I leave as I normally do.

Was it a wakeup call?
It definitely opened my eyes to the dangers of these drugs. They’re fun but in the wrong hands they can be harmful. I hate to hurt anybody. I’m not trying to hurt my friend.

First of all, didn’t this guy just incriminate himself? He basically admitted to giving the drugs to Demi which resulted in her overdose. It’s doubtful he’ll have any repercussions though. Also, doesn’t it go against drug dealer code to reveal your clients, especially when you’re dealing to the rich and famous? He’s an idiot but I guess that line of work doesn’t attract the best and brightest. Maybe he’s just a garden variety hanger-on who happens to have drugs. That would explain why he spilled so easily. Also, Brandon didn’t give Demi the Narcan according to what he told TMZ. Someone else close to her did that and saved her life. No wonder her people want to keep her away from influences like this. Scum. Bag.

Photos are screenshots from TMZ and also credit: Getty