This may not be a big story for most of you this story but I got quite inspired by Kevin Smith’s Instagram post over the weekend so I want to talk about it. Six months ago, director Kevin suffered a near-fatal heart attack. Fortunately, Kevin took the scare as a wakeup call to look after his health. After he was released from the hospital, doctors advised Kevin that should lose 50 pounds for his health. And by gum, that is exactly what Kevin did – 51 to be exact. According to his post, Kevin is following three diets/lifestyles to achieve his weight loss. The first is the plant-based diet that Penn Jillette suggested, which allowed Kevin to shed 17 pounds in just two weeks. Layered on that is the fact that daughter, Harley Quinn, is a vegan so she was able to help him modify his diet to cut out animal products. And thirdly, Kevin was brought on as a Weight Watchers Ambassador and has been following their program through their mobile app. With 51 pounds gone and potentially 10 more to go, it sounds like he’s found a winning formula.

This @weightwatchers Ambassador is thrilled to announce that I’VE LOST 51 POUNDS! Six months ago from right now, I was in the hospital recovering from a heart attack I’d had the night before. When I went to my Doctor a week later, she told me “The best thing you can do for yourself now is to lose 50 pounds.” Half a year later, I can report that I followed Doctor’s orders: I started at 256 and now I weigh 205. This is the lightest I’ve been since high school! My hope now is I can slowly lose another 10 with #weightwatchers and get down to my birth weight of 195! But for now, I’m ecstatic to have reached this chunky milestone! I wanna thank #pennjillette for his book #presto, @raycronise for getting me started with his potato famine, and the good folks at #weightwatchers for their app-based program that made it easy to keep track of and control my eating! And I also wanna thank my kid @harleyquinnsmith – the little vegan astronaut who explored this meatless/milkless galaxy ahead of me, leading by example. Since I never wanted to see the inside of a hospital ever again, I simply copied the Kid. So this wasn’t a diet: these results came from a total lifestyle change of eating solely plant-based foods (which is tough because I hate vegetables). But mostly, I wanna thank all of you as well – for the kind and encouraging words along the way. Never underestimate the power of positive feedback: you folks telling me I looked better or healthier helped me stick with it. An encouraging word can really make a difference in someone’s life and your compliments kept me going! And just look where I went! #KevinSmith #WWambassador #WWFreestyle #WWFamily #WWBros #weightlosstransformation #weightloss #WWCommunity #ad *People following the Weight Watchers program can expect to lose 1-2lbs per week.

I am still not a believer in the plant-based diet that Jillette follows but if it’s working for Kevin, all power to him. I put more weight (no pun intended) in Harley Quinn’s influence with her knowledge of a balanced vegan diet, though. I, personally, have benefitted from the Weight Watchers program. The apps (I use Livestrong now because it’s free) really help me stay on top of it – when I use them. As I said, this post inspired me. I’ve mentioned a few times that perimenopause has really kicked my a$$ in more ways than one and my weight is a big part of it. Just this weekend I promised myself I would take control of the situation. Basically, my energy has been depleted so I am exercising less. Not so much doing it less, but not being able to exert the same level as before. So I need to adjust my diet because I’m burning fewer calories. I don’t need to go back to pre-peri weight, but 10 pounds would be nice. Maybe Kevin and I could be weight loss buddies for that last 10, sending each other inspirational messages and new recipes for zucchini.

Also purely coincidental: I have finally gotten around to watching Veronica Mars and I just watched the episode that Kevin was in, in which he made fun of his weight. Oh how times have changed.

Wide World of Jorts, Then and Now. Years ago, a paparazzo snapped the infamous shot on the left of me wearing my giant jorts at my all-time heaviest. The photo on the right was taken at the same gas station today. I’m very near the goal weight I was told to shoot for after the heart attack, so big thanks go out to @weightwatchers, #pennjillette, @raycronise & @veggiegrill for reshaping my district, so to speak! #KevinSmith #wwambassador #wwfreestyle #vegan #weightlosstransformation #weightwatchers *People following the Weight Watchers program can expect to lose 1-2lbs per week. 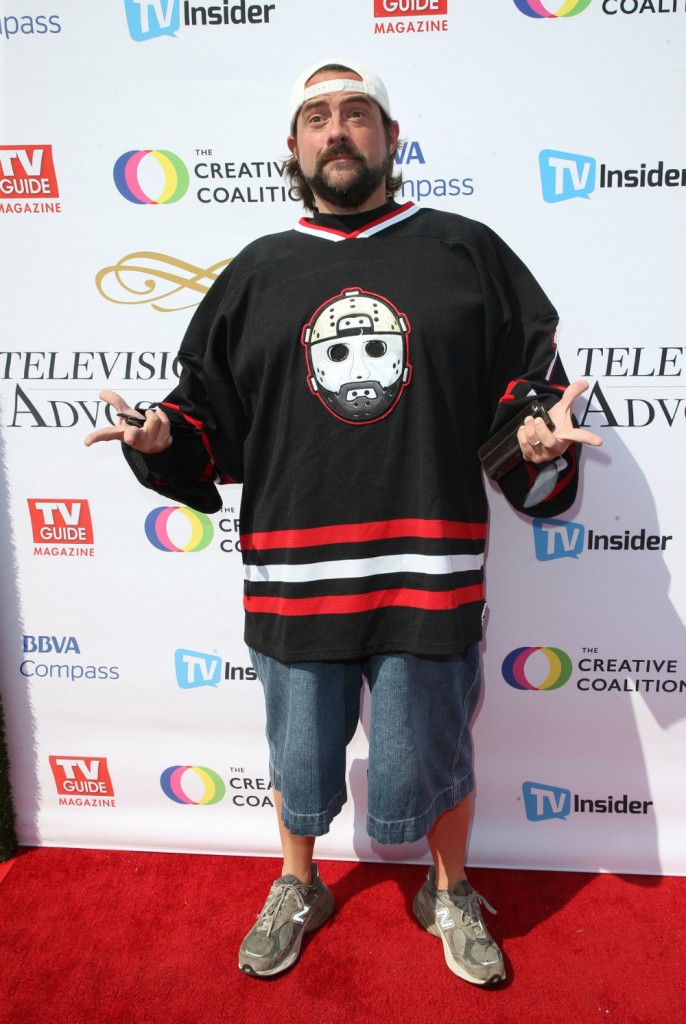