Kaley Cuoco and her new husband, Karl Cook, are definitely animal lovers. They met due to their shared hobby of horseback riding and they also have dogs and at least one rabbit. On Thanksgiving day while celebrating with Karl’s family, they found an abandoned sea lion pup in distress. They did the right thing and called a sealife rescue organization which sent an entire team to save the seal! That was smart actually as they could have caused more problems for the seal if they tried to capture and deliver it themselves. We know about this because Kaley posted to social media about it. Here’s Kaley’s post, including video of all the people who showed up. Unfortunately they could not rescue the seal that night, more on that in a moment.

So here’s what I’m grateful for … at my in-laws beautiful beach house, Karl and I came across a baby seal who was obviously lost and in pain. I called the 24 hour @cimwi___ (marine and wildlife hotline) and asked if someone could come help him. They promised me a volunteer but I was unsure it would happen since it’s Thanksgiving! A few hours later I noticed a group of volunteers huddled around the seal. They all showed up to help!! 😭 my heart is full and I’m thankful these gracious people left their thanksgiving plans to help an animal in need. Doesn’t get better than that ♥️ 🌊 🎥 @bricuoco

There was a big saga with this sea lion as the volunteers were unable to rescue the pup that evening as it was too dangerous at night on the rocks. Along with alerting people on the beach they came the next day to search and found the baby sea lion a full seven miles away. Here’s the wildlife organization, cimwi’s initial post and then their followup with the good news. Use the arrows on the second post bwloe for more photos.

A California sea lion pup nestled in the rocks at Carpinteria State Beach caught the attention of Kaley Cuoco of “The Big Bang Theory” yesterday as the sun was setting. She called CIMWI’s Rescue Hotline and some of our volunteers quickly arrived to asses the animal. The pup was emaciated and lethargic and needed medical intervention. Unfortunately it was not safe for CIMWI to attempt a rescue due to lack of daylight. Beachgoers promised to go look for the pup in the morning and call our Hotline if it was there. We also sent a volunteer to look for the animal this morning but it was not there. We have CIMWI volunteers on the ready to respond should the pup show back up on the beach as well as to respond to any other reports of stranded marine mammals in Santa Barbara and Ventura counties. Check out Kaley’s Instagram post at #kaleycuoco and the HuffPost article with a CIMWI update at https://www.huffingtonpost.com/entry/kaley-cuoco-seal-thanksgiving_us_5bf820e9e4b03b230fa13467?699 #cimwi

Exciting news! CIMWI rescued the California sea lion pup that Kaley Cuoco of "The Big Bang Theory" has made famous… he's #99, CIMWI's 99th patient of 2018. Caring beachgoers from yesterday and CIMWI volunteers searched for the pup at Carpinteria State Beach this morning, but only saw rough seas. Then the pup showed up at Mussel Shoals which is about 7 miles south of Carpinteria State Beach where the animal was spotted late yesterday. Once again the pup had found refuge on the rocks. CIMWI was able to safely rescue this little pup and transport it for care. #99 is a male California sea lion pup that is very underweight, he only weighs 26 pounds. Most California sea lion pups are born in June and July with high concentrations born mid-June and June 15th is referred to as the California sea lion's birth date. Pups weigh 13-20 pounds at birth and they nurse for at least 5 to 6 months and sometimes it can be for over a year. #99 is most likely a newly weaned pup that is not adept at foraging for fish on his own. CIMWI will provide medical and rehabilitation care for the this pup with the goal of returning him back to the wild after he gains back his health and the extra weight to jump start his reintroduction to his natural habitat. If you encounter a marine mammal that needs help in Santa Barbara or Ventura counties, please call CIMWI's Rescue Hotline (805) 567-1505 and follow these 4 steps http://cimwi.org/how-to-help-a-stranded-marine-mammal/ #CIMWI #kaleycuoco #SecondChanceAtLife #SeaLionRescue #GettingExtraHelpToThriveInTheWild #Thanksgiving #SavingMarineMammals

The best story! A huge shout out to all the volunteers and staff @cimwi for coming out again today to search for (their #99th patient of 2018)Sandy the sea lion (yes I named him) finding and rescuing him! He is currently at their Santa Barbara facility getting rehabbed and prepped to be released back into the wild as soon as he’s able 🌊 amazing organization doing amazing work for marine animals in need. Thank you!! 💫

We mostly see videos of sea lions looking adorable but they have a very difficult life and pups have to quickly learn to find food or they will end up starving like poor Sandy. I saw a PBS Nature special on sea otters years ago and while they’re different creatures (yes I had to look this up) sea lions also have to be taught by their mothers to hunt and consume large amounts of fish like the otters. Many of them die after weaning as they’re unable to fend for themselves. Thank goodness there are people who will take the time to help animals, even on holidays.

Also, wouldn’t you like to see Kaley get her own TV show where she highlights animal rescue and rehabilitation organizations? I think this should be her next project now that BBT is ending. Her dogs, horses, other pets and hot husband could be featured too!

Norman and I here to support our buddy @martinspanjers who’s running for #teamritter in the @nycmarathon ! If you would like to donate to this amazing cause, all proceeds go to the John Ritter Foundation for Aortic Health… Love you , John always! 💋💜 (link will be in my bio for a few days!) 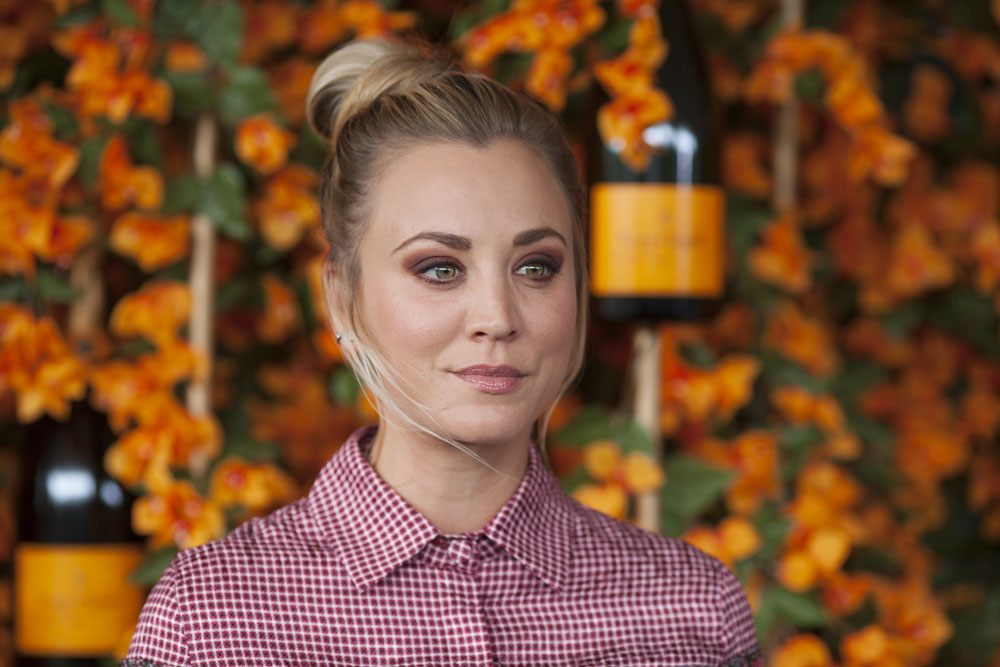