Embed from Getty Images
Lily Tomlin and Jane Fonda were on Ellen earlier this week to promote the new season of Grace and Frankie, which is coming out on January 18 on Netflix. (I watched part of the first season with my mom and then she liked it so much she binged it without me. I wanted us to watch it together, but I get it!) They are so cute together, they kept cracking each other up and I loved watching them. They discussed how 9 to 5 with Dolly Parton happened, the reboot of which is being written now. Jane said she reached out to Lily after seeing her on a show and that she heard a song on the radio by Dolly and realized she wanted her in it too.

Jane is 81 freaking years old and Lily turns 80 this year. They joked about having a destination birthday party for Lily and selling the photos. Lily has a partner, Jane, whom she’s been with for 50 years and married 5 years ago. Ellen asked her about a chance she was given in the 70s to come out as gay, which of course was hard to do even in 1997 when Ellen did it. Ellen paid dearly for that. Time Magazine approached Lily to come out way back in 1975 and she said no.

I heard that Time Magazine approached you in 1975 to come out and put you on the cover. How did they know you were gay? Why did you say no?
Lily: Pat Kingsley called, who was my publicist. She told me that Time would give me the cover if I would come out. It was a hard decision to make. So I fell down on the side of probably, after what you went through, probably good sense. So I decided that I just wasn’t going to play their game.

You weren’t ready. You didn’t want to do it yet
Lily: I wanted to be acknowledged for my performance. I can see in retrospect that was hardly worth it.

Jane, I have to ask you about your dating life now
Jane: I’m going to come out. If they put me on the cover of Time I’ll come out
Lily: It’s kind of past the time of the value of a Time cover, it you’re asking my advice.

After that they played a game called Jane and Lily DGAF where they answered random questions. My god I couldn’t stop laughing. I put that below. Lily is absolutely hilarious and the two of them adore each other. They were asked to describe each other in one word. Lily said “adorable” and Jane said “genius” at the same time and they kissed on the cheek! Here’s a screenshot of that. For “person you’d like to do a love scene with” Jane said “Liam Neeson or Blake Shelton” (Jane needs better standards, but Liam I get) and Lily couldn’t answer. She said “I love Jane” though. AW.

Ok now I have yet another show on my Netflix queue. These two are the best. As for Lily not coming out way back in 1975, Ellen was pretty much the first to do that and she was publicly mocked and no one would hire her for years. Imagine what Lily would have faced 22 years prior. 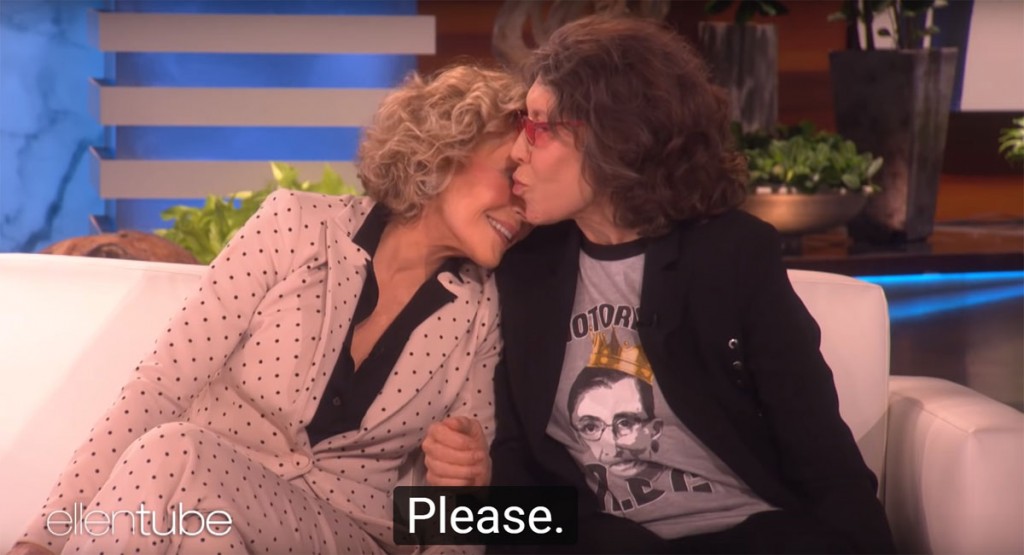 Here are the videos!