Danai Gurira: ‘I try to avoid dairy, I eat mainly fish, and I have a lot of vegetables’ 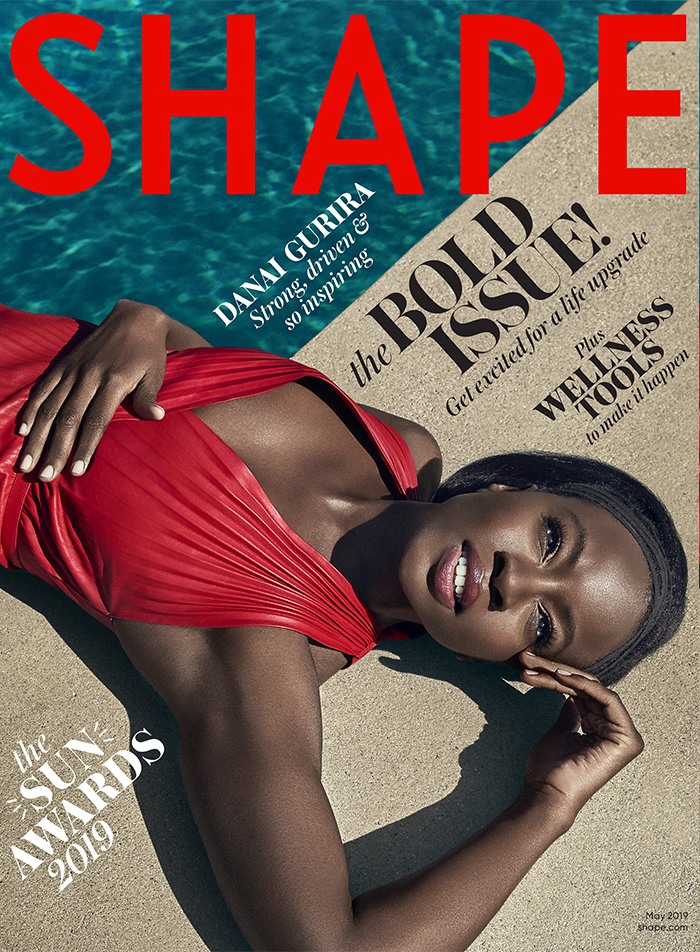 Danai Gurira covers the latest issue of Shape Magazine. Did you know this woman is 41 years old? I had no idea. Truly. She looks amazing for any age, but I really thought she was maybe 30, tops. Danai covers Shape to promote The Walking Dead and Avengers: Endgame, where she plays Okoye, one of the greatest warriors of Wakanda. It seems that Danai’s vampiric agelessness isn’t just great genes (although clearly they do their part), but also a real fitness and diet plan, and a whole body/mind plan for world domination. You can read her Shape cover profile here. Some highlights:

Her fitness plan: “For the last three years, I’ve worked out with my trainer, A.J. Fisher, three or four times a week. I started working with her when I got the role of Okoye. I was about to go into pre-production, and I felt like I needed to amp up my fitness and endurance. I call her the MacGyver of trainers because she can create an elaborate course in your living room with just a coffee table and a couple of resistance bands. She mixes things up—it’s never the same workout, so your body can’t get used to it. She uses methods I was already connected to, like the Alexander technique, yoga, and Pilates, and incorporates them into a very rigorous workout that enables me to strengthen and become more holistically stronger.

The payoff of fitness & strength: “For me, the coolest thing is when you feel the work pay off. You exercise a lot, and you’re doing your job, shooting long hours. And then you go to work one day, and you have to do something physical…and your body just knows how to do it. That happened for me in The Walking Dead and Black Panther. I thought, Oh, my God, I did that, and it was not difficult. And I knew that my body was getting smarter as I was devoting hours to its upkeep. It delivered at the moments when I needed it to.”

Her diet: “Five years ago, I made the decision to eat cleaner. I try to avoid dairy, I eat mainly fish, and I have a lot of vegetables. It doesn’t make sense as a meal to me if there is no green on my plate. Eating this way truly made me feel better, and so I’ve stuck with it. I’m not a zealot about it, though. I really love fries, and I have them when I want to treat myself. Sometimes when I’m on a plane, I’ll eat a little something I don’t normally have because I’m like, Eh, I’m in the air, so it doesn’t count. It’s all about moderation.”

The complex character: “I have had the good fortune of being able to portray characters like the leader of an army or a woman with a big samurai sword that she uses very well. And I thoroughly enjoy that. I believe women should be able to play roles that are messy and contradictory and complicated and not always likable, just as men have. To me, that’s equality. But we can’t overcorrect and make all female characters strong and perfect. Because that is also limiting and restricting. Women should be able to portray the full gamut of human experience. There’s a lot of power in complexity.”

I’m interested in the whole “it’s never the same workout, so your body can’t get used to it” thing, because I know I need to change things up but then at the end of the day, I usually just do the same cardio-and-weights workout I always do. I know my body is used to it, but I figure that because it still hurts and because it’s better to be doing something, I’m fine with staying in my comfort zone. But yeah, Danai reminded me once again that I need to change it up a bit. As for her diet… it sounds like she’s just eating fish and veggies and that’s about it. If I only ate fish and veggies, would I look as good as Danai? Probably not.

Danai posted more photos from the shoot on her Instagram:

“I consider everything I do that involves any degree of advocacy or service to be self-care. Stepping out of myself to help others is also a way of taking care of my soul, quite honestly. I don’t feel good about who I am if I’m not connected to a larger issue.” Excited to share my May cover feature with @Shape magazine with all of you! Catch the full feature at the link in my bio. Thanks so much to the entire #Shape team – this was a lot of fun!

32 Responses to “Danai Gurira: ‘I try to avoid dairy, I eat mainly fish, and I have a lot of vegetables’”