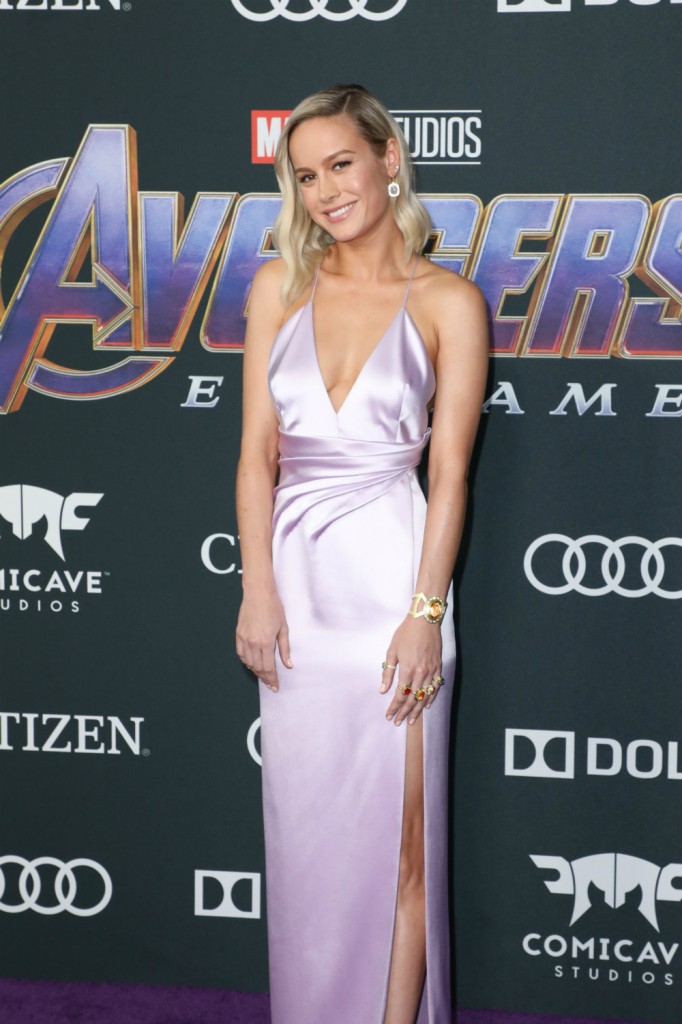 Scarlett Johansson and Brie Larson appeared on Ellen DeGeneres and to be perfectly frank, the whole thing was a delight. Not only do they have a great rapport, they’re incredibly supportive of each other. Brie seems to appreciate that Scarlett is an Original Avenger and Scarlett clapped and whooped when Ellen announced Captain Marvel made $1 billion, without once making a comment about where is her g-d stand-alone film.

Ellen mentioned the OA’s tattoo and that led to a discussion of Marvel fans getting tattoos of both Black Widow and Captain Marvel. Brie seemed floored at the notion that her face appeared on other people, which I imagine would be very weird. Ellen posted some photos of the tattoos and some were very good work while some were, well, let’s just say – not.

Fans have tattoos of all of you. There’s some crazy tattoos that fans have gotten. Like, the entire back

SJ: I’ve seen some of them

BL: The entire back? What?! I’m on someone’s back

SJ: That looks like The Bride of Chucky, remember that one?

BL: I mean, I feel a new sense of pressure, like as a person, to not be a giant embarrassment to someone. Because that’s going to be a lot of work to cover up

I love the progression of this discussion more than anything. It went from Oh Yikes to Hawt! to a moral obligation to live a munificent life so someone else doesn’t regret their 2019 decision for body art. If you watched the clip, Ellen suggested that maybe if Brie messed up, the person could alter their tattoo into another actress who looked like her. To which Brie offered up Angelina Jolie as Maleficent and Ellen’s reaction is precious.

Prior to the tattoos, the ladies talked about their first kisses. Brie could not remember if hers was on screen or real life. Brie thinks this might speak to how unremarkable the kiss was. But it also could be Brie’s memory because when Ellen asked when she and Scarlett met, she couldn’t remember that properly either:

Where did you meet and how long have you known each other? I want to hear the whole story

SJ: You don’t remember how me met? How did we meet?

SJ: Clearly it made an impression on me but somebody else didn’t care

BL: We had dinner on New Year’s Eve

SJ: We worked together

Apparently, they made Don Jon together, but Brie tried to spin it as she was just a nobody and didn’t think Scarlett would remember her. Sure Jan. Still it was a nice save and clearly ScarJo wasn’t bothered.

Following their segment, they played a game against Ellen and tWitch. The best part is Brie going through each member of One Direction’s names trying to come up with The Cambridges’ kids names:

Takeaway: Always get on tWitch’s team for trivia. I am way behind on my Avengers promo interviews. I promise to catch up, though. Usually my favorite promo circuit duo are the Chrises (Hemsworth and Evans) but Brie and ScarJo might take their place this go-round. 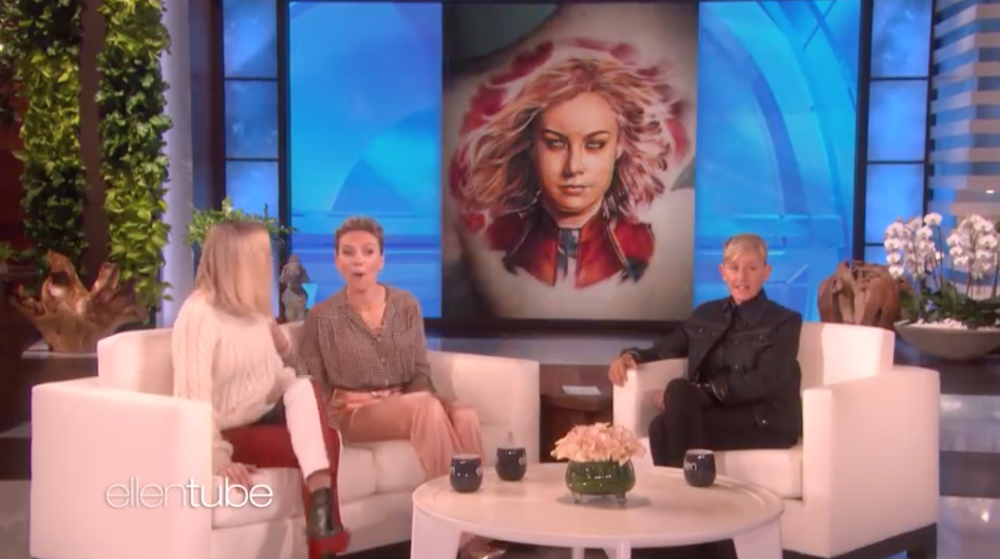 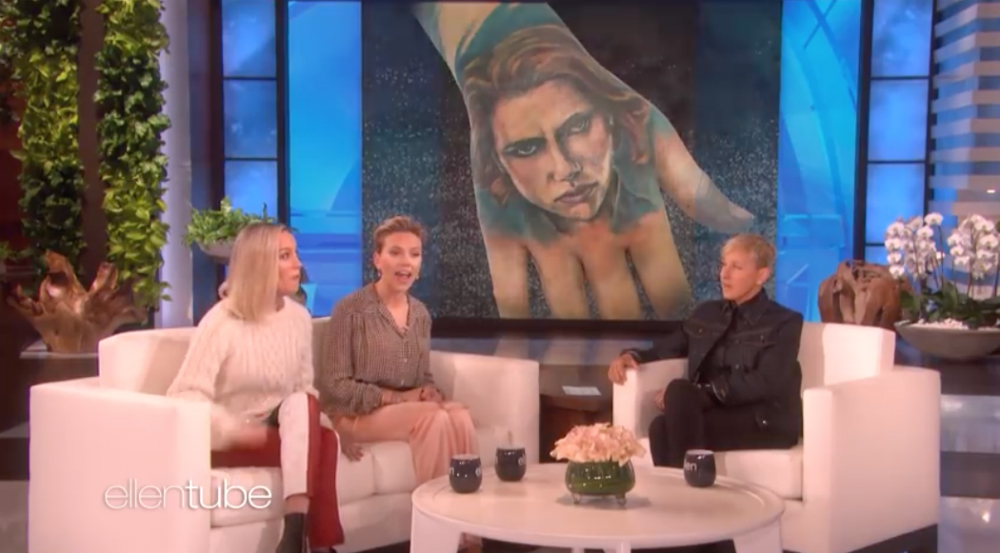 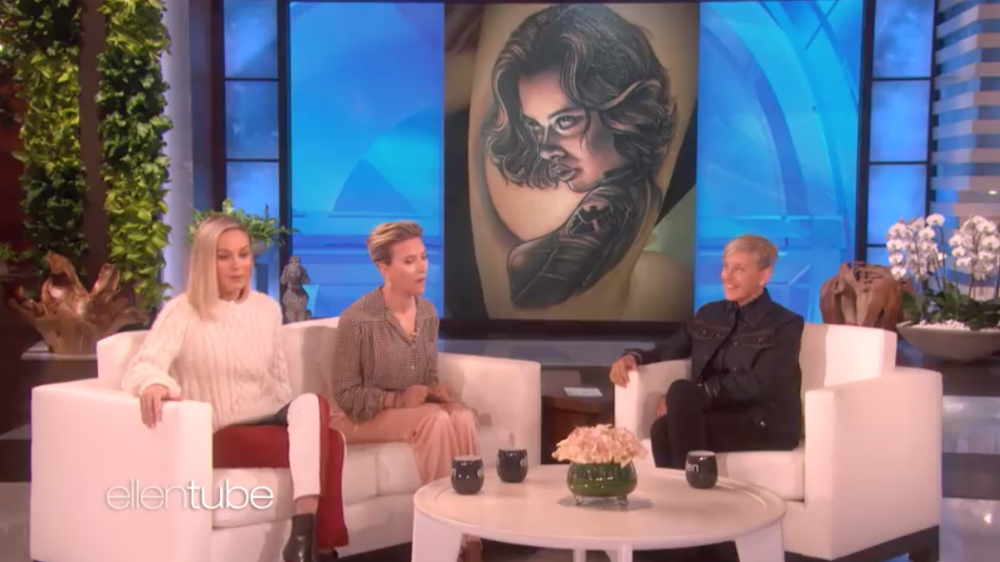 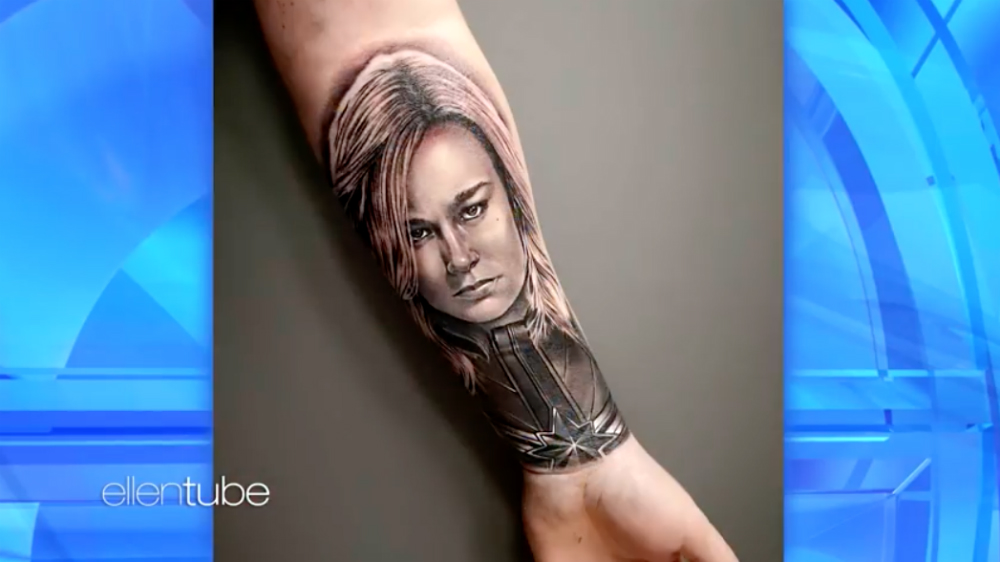 I can’t decide whose Infinity Gaunlet jewelry I like better, ScarJo’s or Brie’s. Can I have both? 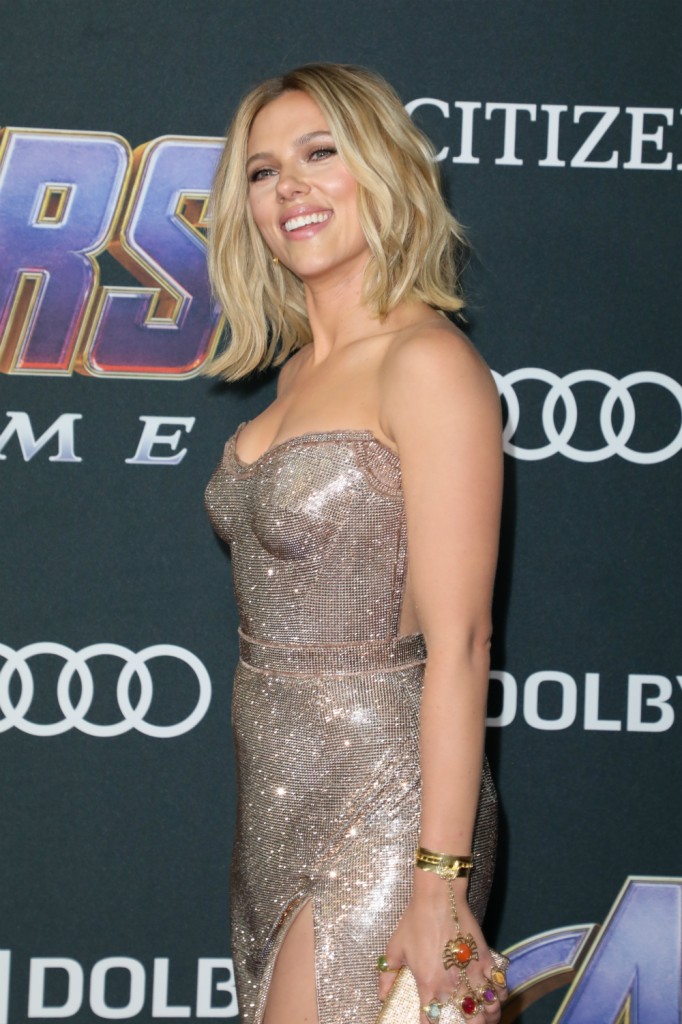 16 Responses to “Brie Larson & Scarlett Johansson react to fan tattoos: ‘That looks like Bride of Chucky’”