The Original Avengers (minus one) got matching tattoos

It’s been a week and a half since I saw Infinity Wars and I think I’ve finally recovered. I got so involved while watching it, I ended up with a splitting headache. I thoroughly enjoyed it. Like most action flicks, it wasn’t perfect but oh my gawd, there was so much right about it. And like many of you, my investment in the franchise goes back to the beginning, when there were only six Avengers: Iron Man, Captain America, Black Widow, The Hulk, Thor and Hawkeye. As we know, the people who play those parts – Robert Downey, Jr., Chris Evans, Scarlett Johansson, Mark Ruffalo, Chris Hemsworth, Jeremy Renner – are all closing out their contracts with Marvel. Some outlets think they’re over the franchise and happy to be rid of it. While they might look forward to the freedom of branching out, I believe they loved working together, something RDJ touched on in his emotional speech at the press conference.

As a testament to their bond, the Original Six Avengers – A6 – got matching tattoos. According to RDJ, it was Scarlett’s idea. She and Evans, who is still performing Lobby Hero in New York and missing all the fun, were the first to get them from East Side Ink Tattoo artist Joshua Lord. Then Joshua flew to LA and gave the same tattoo to RDJ, Renner and Hemsworth:

The holdout was Ruffalo. Even though there is the technicality that Ruffalo took the role over from another actor, I don’t think that’s had anything to do with this. I think he just doesn’t do tattoos (he probably has the design on a pillow that he lays his head on and whispers ‘goodnight, guys’). The design itself is really cool. It’s the Avengers A over the number 6: Apparently, Joshua stood in for Ruffalo to receive the sixth tattoo. Each of the A6 who got the tattoo inked one line of the design on him: (By the way, there is evidence to suggest that Hawkeye is Joshua’s favorite Avenger but I’m not here to start trouble.)

Does this sound familiar? Why yes it does as the original cast of Peter Jackson’s Lord of the Rings got tattoos of “nine” written in Elvish to commemorate their journey. And like the A6, one of the cast didn’t get one – John Rhys Davies, who played Gimli. So, his stunt double got the tattoo instead:

Again, this all warms my heart. I love the idea that these folks feel so connected, they want to commemorate in some indelible way. I wonder if the tattoos glow when they are all in the same room.

I also hope that fans, no matter how well-intentioned, don’t get the same work. These guys have given us a lot in the past decade, we should let them have this for themselves.

Hey, Sam – should we get a tattoo as well? 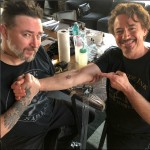 13 Responses to “The Original Avengers (minus one) got matching tattoos”