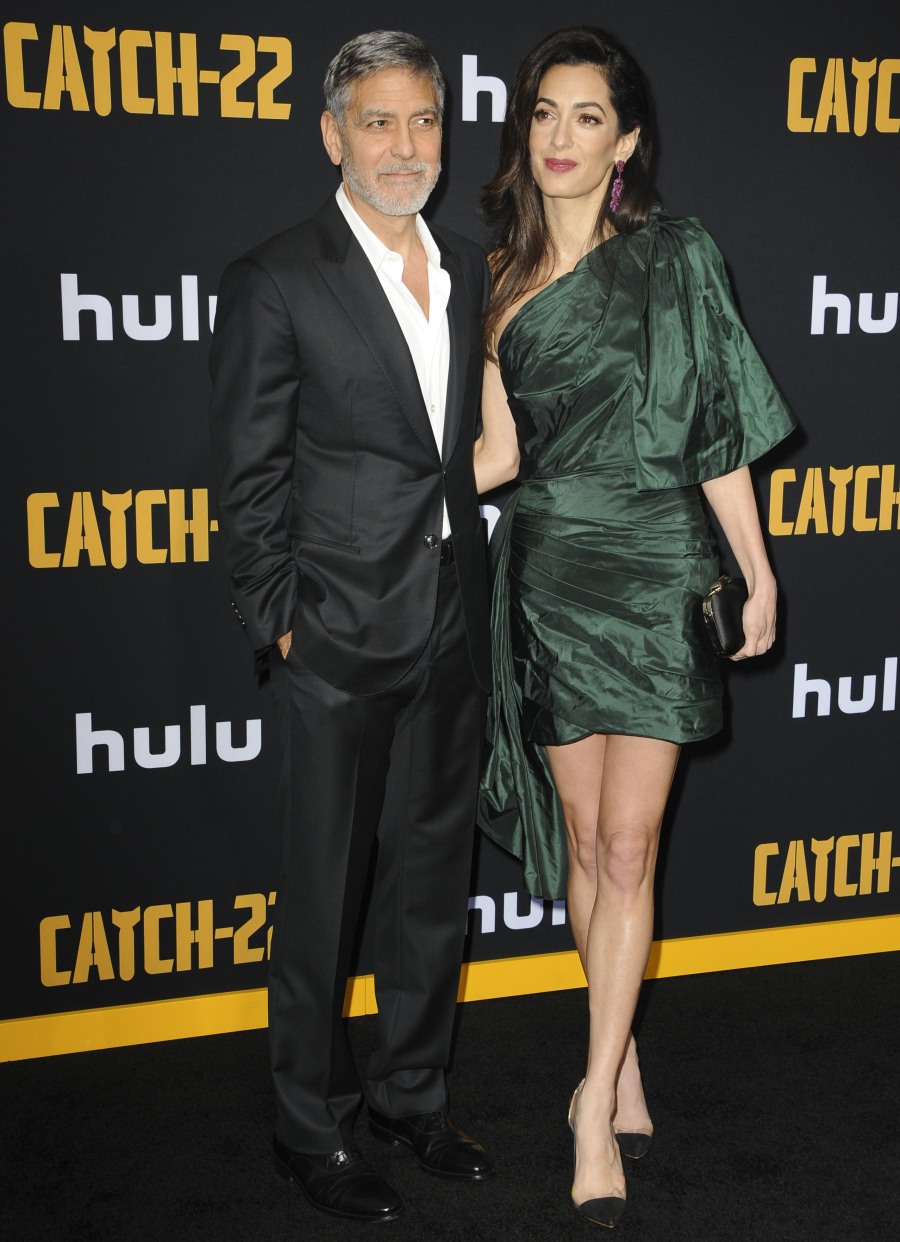 Here are some photos from last night’s LA premiere of Catch 22, the Hulu miniseries produced by George Clooney. Clooney directed a couple of the episodes too, and he has a supporting role. I think it’s interesting that George had something to promote and he and Amal still didn’t attend the Met Gala on Monday. That’s interesting, right? Especially given that just last year, Amal was one of the co-chairs of the gala. Amal maybe/probably pissed off some important fashion people last year when she changed her mind at the last minute about wearing Tom Ford. I kind of wonder if… maybe Amal and George weren’t invited to this year’s gala. Or maybe they were invited but they thought the “camp” theme was beneath them. That’s probably more likely.

Anyway, they made sure to be in LA (not New York) this week, so I guess it doesn’t matter. Amal chose to wear this absolutely fug Oscar de la Renta cocktail dress to last night’s premiere. Again, I have similar coloring and I love to wear this shade of green too. I tend to think the color is too “wintery/Christmasy” for a May premiere, but that’s not even my biggest problem. My problem is that the fabric is some really cheap looking shiny taffeta. My lord. Plus, the design isn’t super-flattering on Amal. She has a problem with cocktail dresses, right? 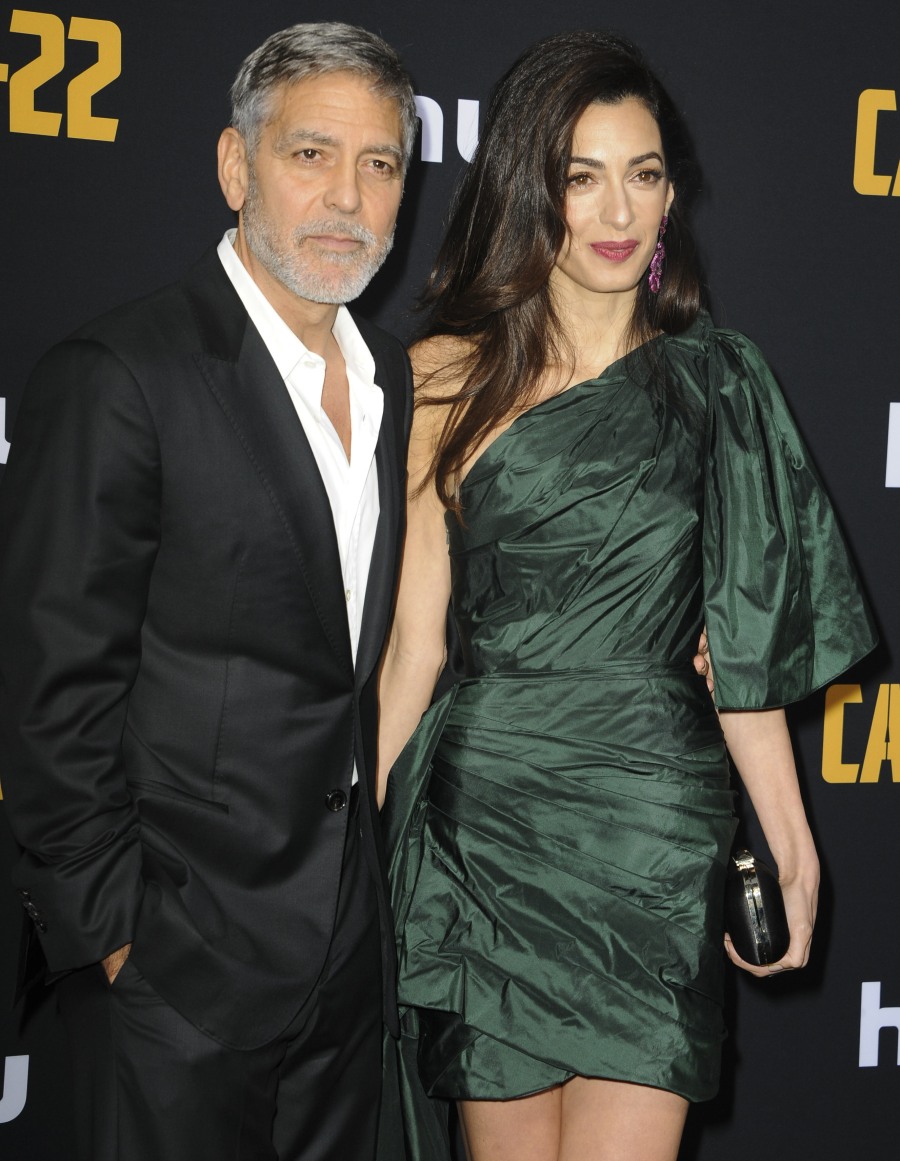 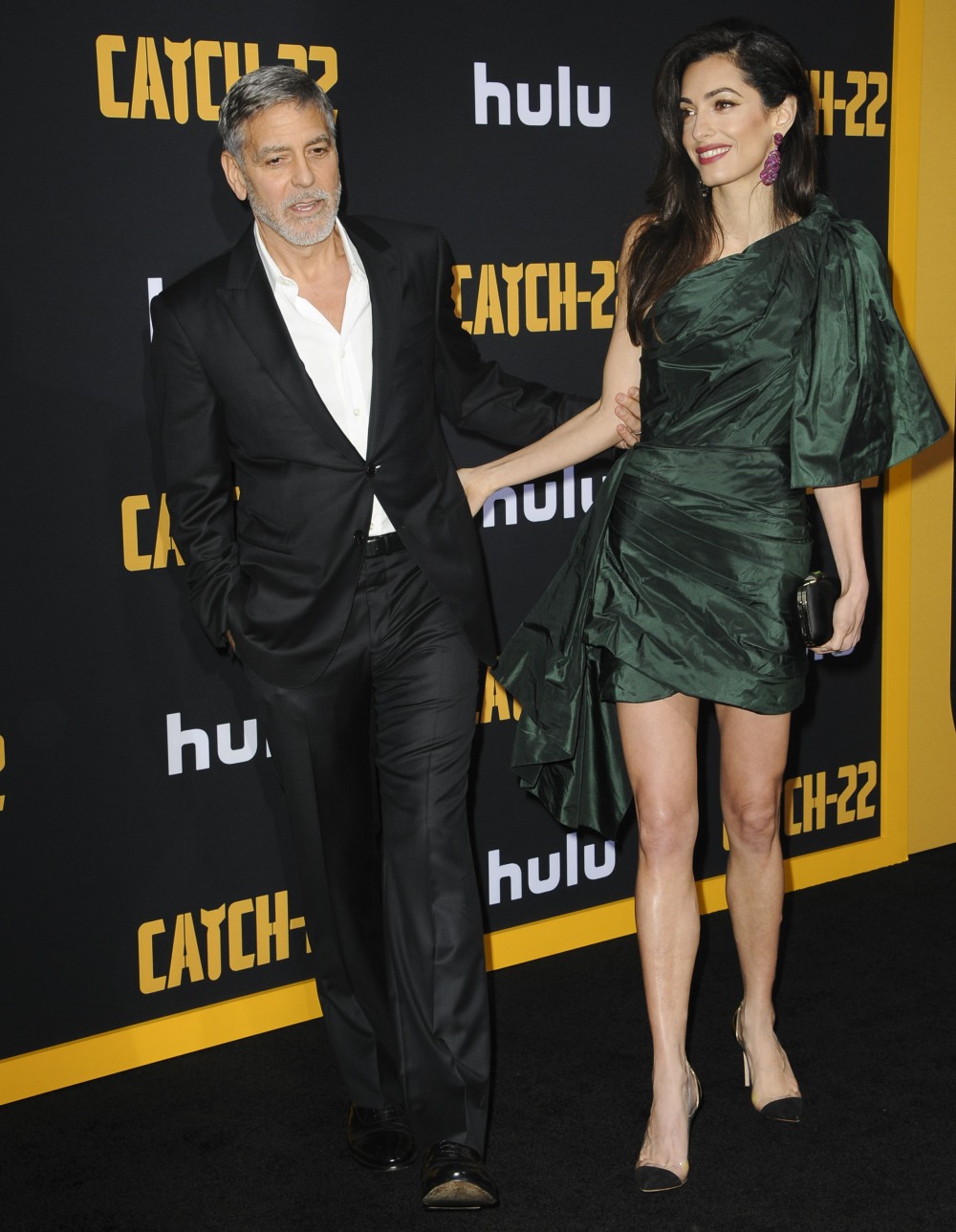 Here’s George and some of his costars. Christopher Abbott is the guy in the brown suit and he plays Yossarian. Kyle Chandler is… delicious. I’ve never noticed this before, but Kyle Chandler definitely has a “young Clooney” look to him, right? It’s the eyebrows and the eyes – very similar. I wonder if that’s why George hired Chandler for the miniseries – you just know that when George looks at Kyle, George thinks he still looks like that. (He does not.) Also, Matt Damon was there to support his bro. Luciana… had some work done, yes? 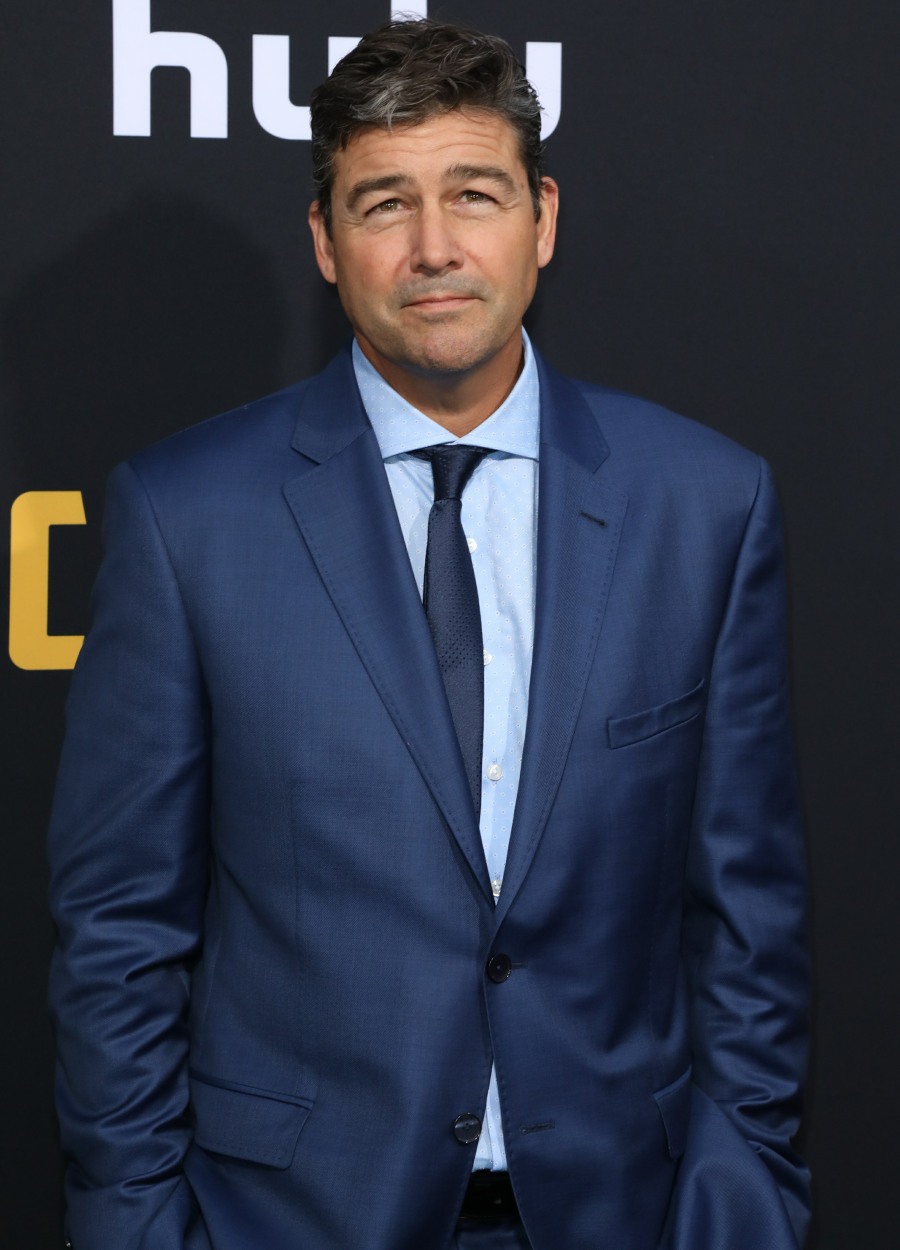 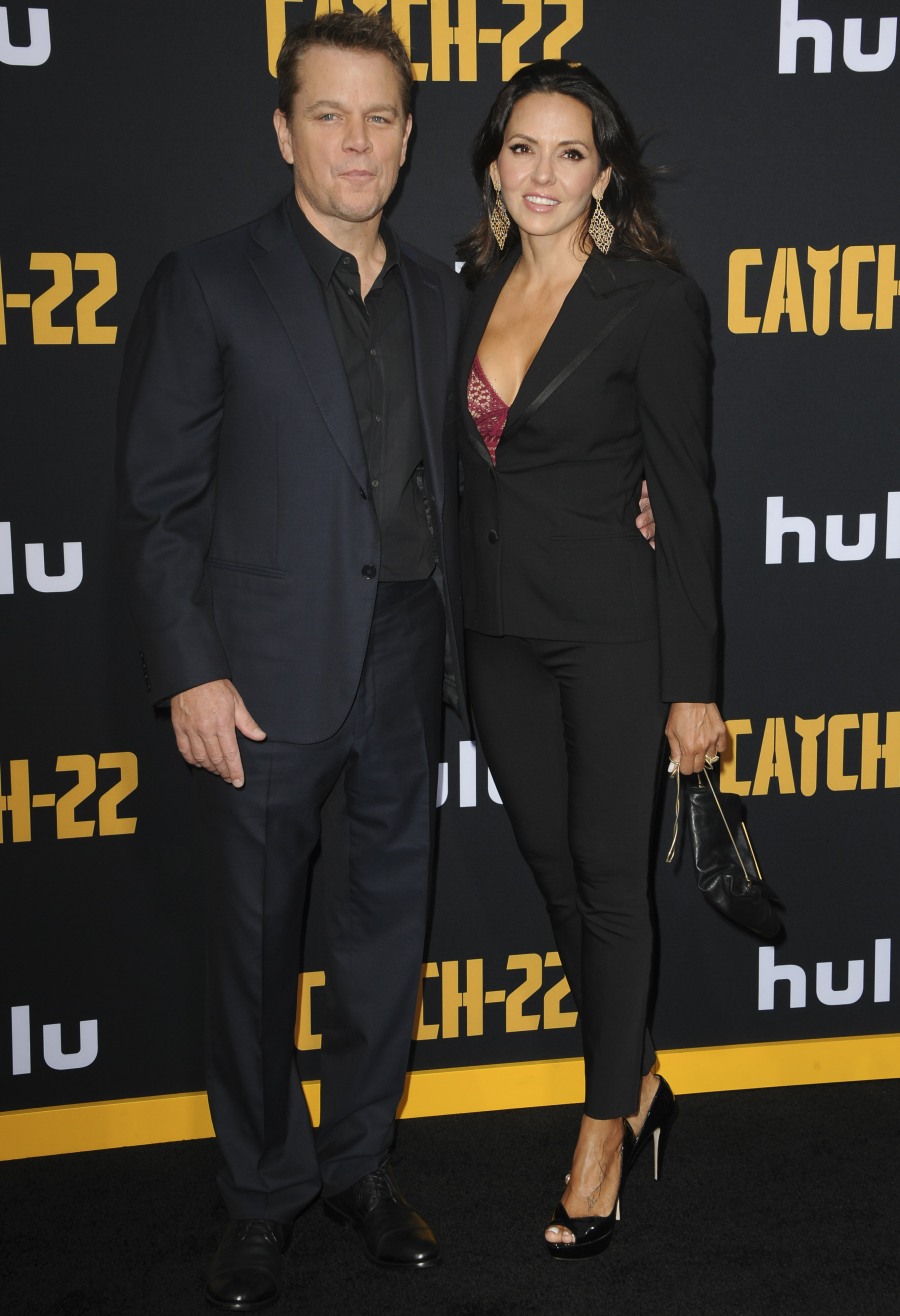 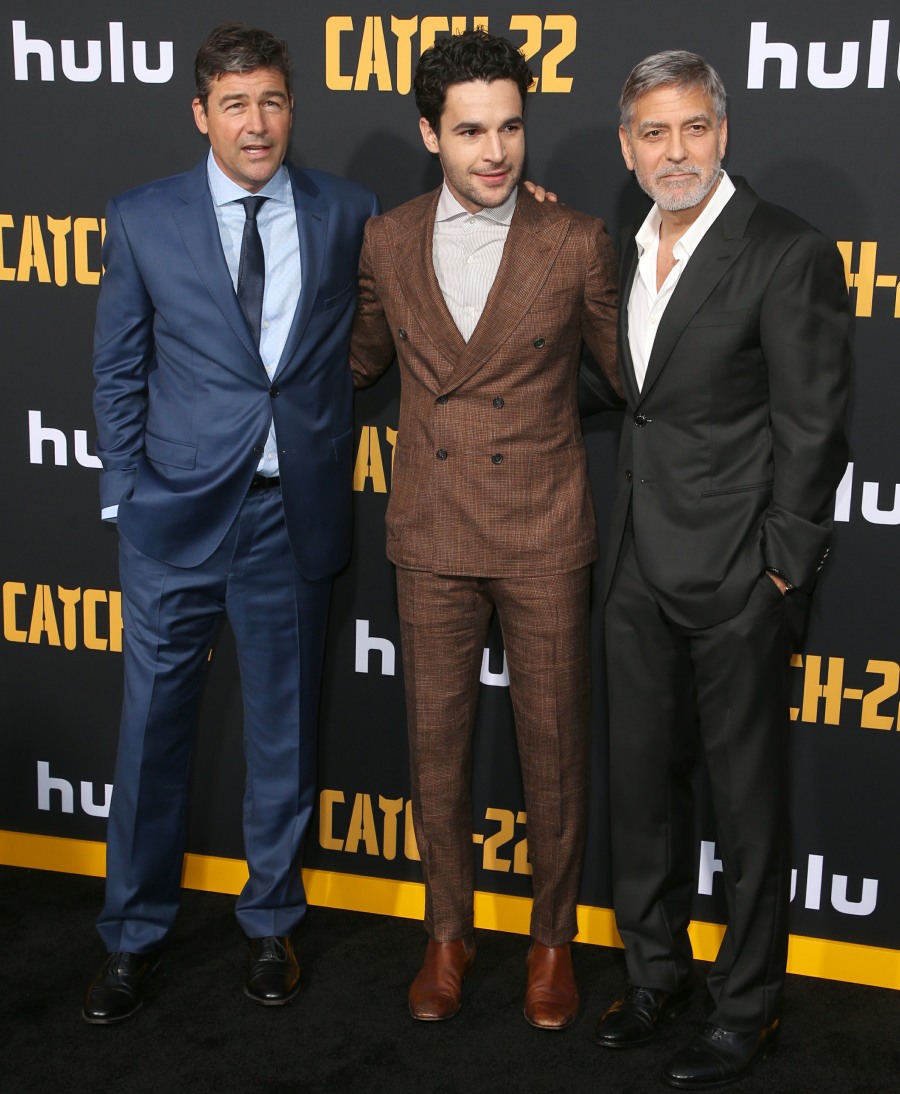 34 Responses to “Amal Clooney in Oscar de la Renta at the ‘Catch-22′ premiere: cute or budget?”