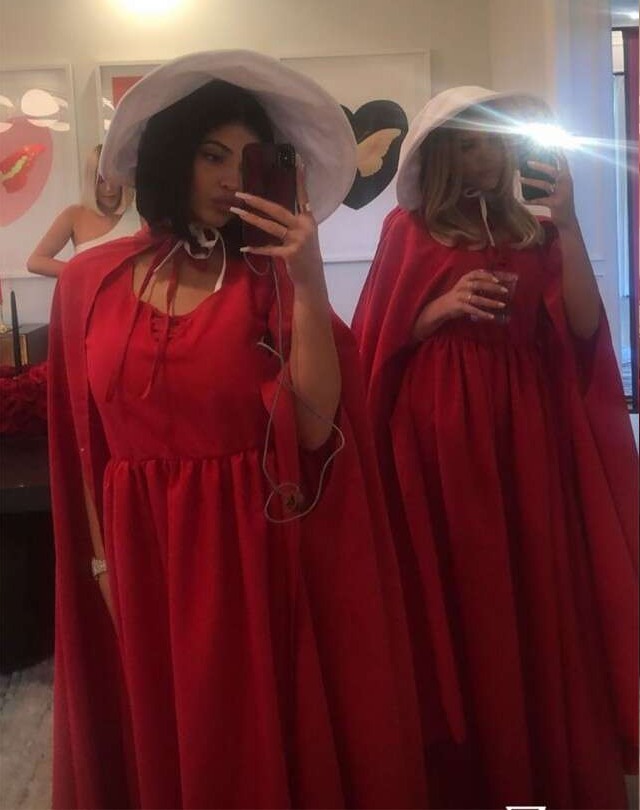 This is like something from a Saturday Night Live skit. The thing is, when I first read the headline “Kylie Jenner throws a Handmaid’s Tale-themed party,” I truly normalized it to the point where I was like “there’s some justification here, like the proceeds to the party go towards Planned Parenthood or something.” But no. This was not a fundraiser party to draw awareness to how reproductive rights are under attack. This was a birthday party in which a handful of vapid, illiterate rich girls thought it would be funny to dress up as fictional “handmaids” and put the whole thing on social media. I told you, it’s like an SNL skit.

Kylie Jenner is receiving harsh criticism after she and Sofia Richie dressed up in costumes from The Handmaid’s Tale for a themed party over the weekend. Jenner, 21, took to her Instagram Stories on Saturday to share a snap of herself and Richie (who is dating her sister, Kourtney Kardashian’s ex, Scott Disick) wearing red outfits for a bash at her Calabasas, California, home.

The event was in honor of Jenner’s pal, Anastasia “Stassie” Karanikolaou’s, birthday; the reality star decked out her abode to look like Gilead, the fictional setting of the popular Hulu series, and served cocktails with names like “praise be vodka,” and “under his eyes tequila.”

However, not everyone was impressed by the pals appearing to glamorize a show which highlights serious issues like women’s rights violations. “I honestly believe Kylie Jenner did NOT understand The Handmaids Tale if she’s throwing a themed party about it,” wrote one Twitter user. “But why is Kylie Jenner having a Handmaid’s Tale party… she does realize it’s about rape & oppression… right?” questioned another.

I found this video (below) where Kylie tells a friend that they’re going to watch the first episode, which… maybe Kylie and her friends are truly watching A Handmaid’s Tale and this themed birthday party coincided with the premiere of Season 3? I mean, anything is possible. But I genuinely think that Kylie and her friends were like “cool handmaid’s tale cloaks, great theme for a cocktail party!” Wrong moment, chicas.

Kylie throwing a themed birthday party for @stassiebaby and the premiere of @handmaidsonhulu who watched the show? I watched most of it it’s so good