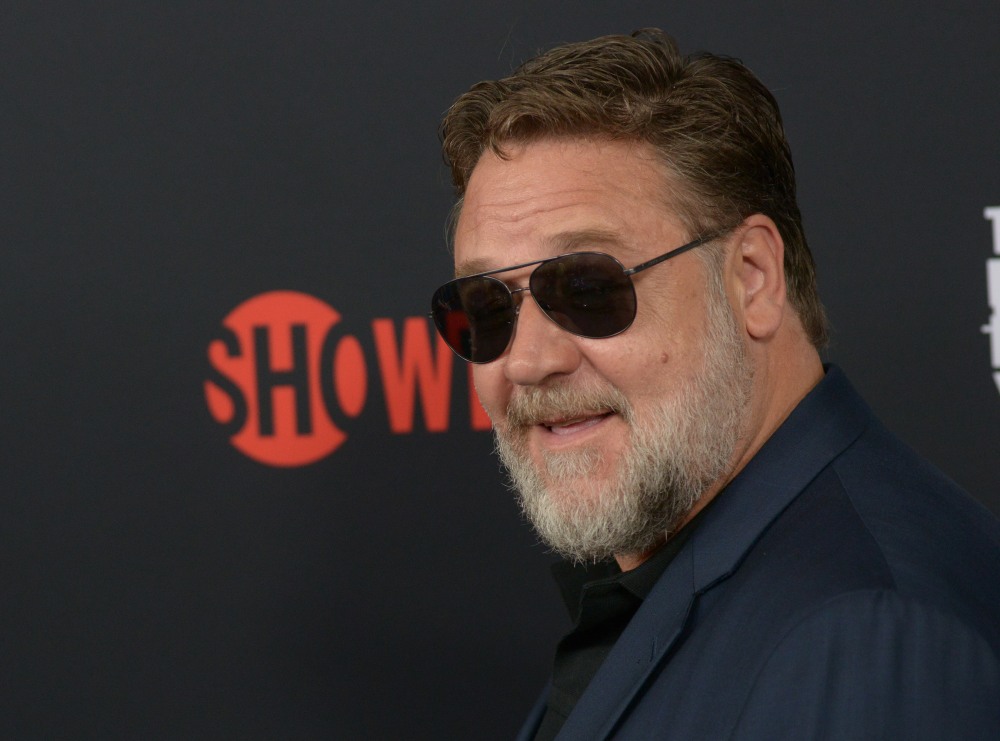 Ever since the Roger Ailes-Fox News TV movie/miniseries was announced, I’ve been dreading it. First of all, it was announced and made too soon – Gretchen Carlson had barely gotten her settlement and Roger Ailes was barely cold in the ground (and burning in hell) when they decided to do this miniseries, The Loudest Voice. It was in poor taste on a lot of different levels. Also in poor taste? Casting Russell Crowe as Roger Ailes, with a mountain of prosthetics. I will ring this bell as loudly as I want and as often as I want: I don’t want to f–king hear about an actor’s heroics in “sitting for hours in the makeup chair” when it’s clear the producers should have just f–king hired someone who looks more like the real person. Enough of this sh-t.

Russell Crowe had another of his trademark meltdowns this week. The historically histrionic actor lost it at a Q&A event while defending late Fox News chairman Roger Ailes, whom Crowe plays in a new Showtime series, “The Loudest Voice.” A source told us Crowe was scheduled to take part in a panel discussion about the series at Build Studio in the Village — but went off on a tirade when event producers wanted the host to introduce Crowe to the stage in a way that would cast Ailes in a bad light.

“It was harmless,” says the source. “But Russell threw himself into a rage as soon as he heard it. It had not been preapproved by his people. He refused to walk out on the stage. He was screaming at people and then just stormed out onto the street.”

We hear his castmates Sienna Miller, Naomi Watts, Annabelle Wallis and Seth MacFarlane were already onstage during the incident. When the host, Ricky Camilleri, introduced the panel, he referred to Ailes — who resigned from Fox News in 2016 following sexual harassment allegations — as someone who bullied journalists and politicians, and was a “sick person.” He then took it further, proceeding to expand on his negative views of Ailes. According to the source, Crowe returned to the building to do a press interview in the basement, and Camilleri and a producer came down to apologize to him. But Crowe was still fuming. “He completely unloaded on the host!”

A rep for Crowe told us, “This is not correct. Russell did not ‘freak out,’ and there was no ‘curse-filled tirade.’ He simply made the decision not to do the interview following the host’s intro.” They claimed Crowe “graciously accepted” the apology. A rep for the panel said, “[Crowe] was concerned the interview would be biased given our host saying [Ailes] was not a good guy. That’s the end of the story. Our studio is a place of respect and comfort, and everyone who comes here has a great time. It’s just not true.”

I mean… do we all have to personally apologize to RUSSELL CROWE whenever we talk sh-t about Roger Ailes now? It probably wasn’t even sh-ttalking, it was just “a factual list of things Roger Ailes did.” Roger Ailes would have given Leni Riefenstahl a run for her money. Roger Ailes sexually harassed and abused dozens of women in his employ, and created a culture where the men of Fox News always devalued, debased and abused their female coworkers. This is not a moment for “well, actually, you’re being too harsh on Roger Ailes!” And it’s definitely not the moment for Russell Crowe to get mad about… people telling the truth about Roger Ailes.