Kristen Stewart talks to ghosts, asks them to chill out and haunt someone else 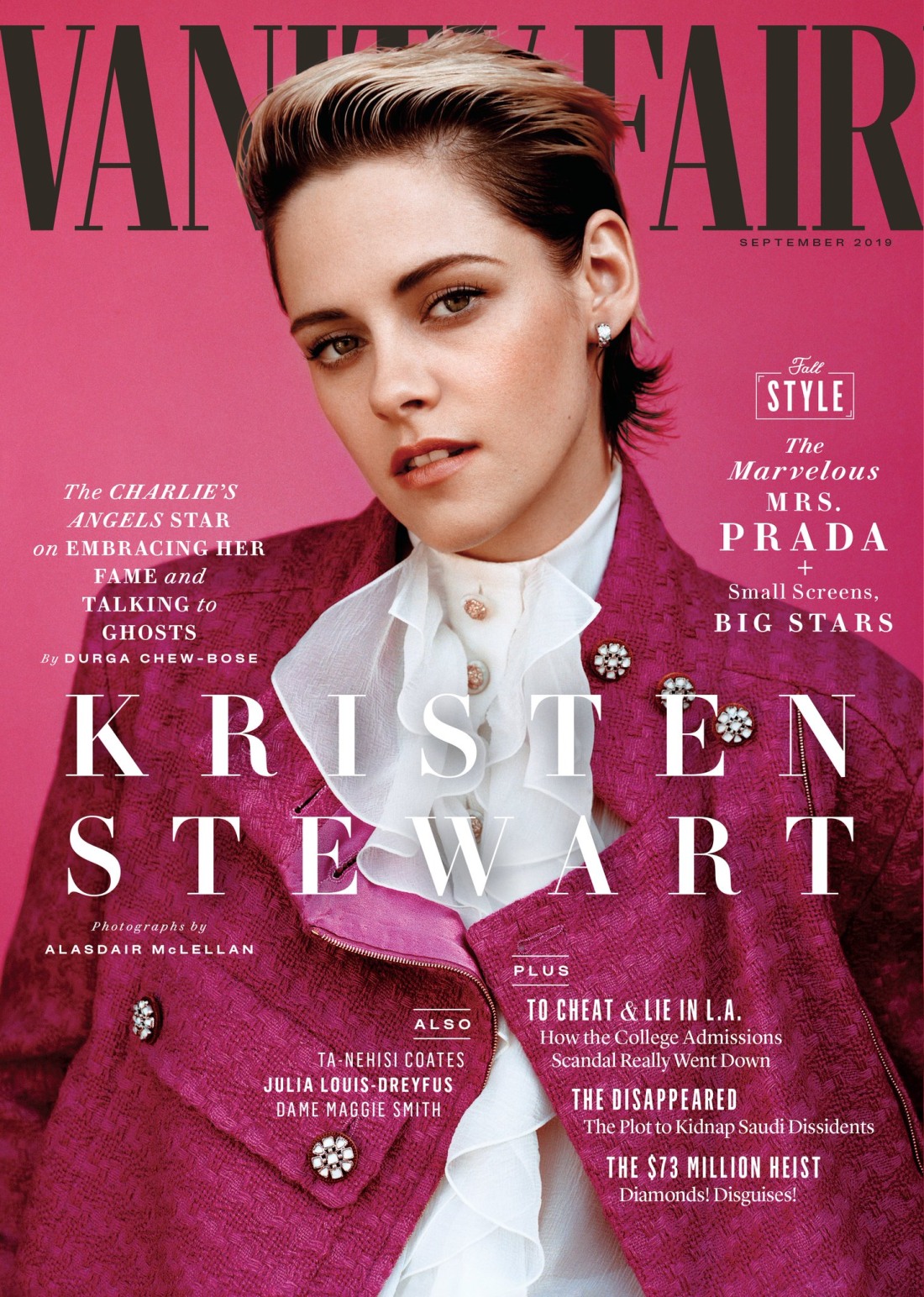 Kristen Stewart covers the September issue of Vanity Fair to promote the new Charlie’s Angels movie. It feels like it’s been a while since Kristen has done any kind of in-depth magazine interview, and so I went into this pretty eager to hear about her mindset these days. She’s grown up in front of us, and it’s been messy and fun and tragic and I love that she came out of it all with some sense of who she really is now. She seems very happy and she seems to understand the limits she needs to impose with what she reveals about herself. But she’ll always be my angsty lip-biter, I swear. You can read the full Vanity Fair piece here. Some highlights:

She will soon play Jean Seberg: She’ll play Seberg in director Benedict Andrews’s political thriller, Against All Enemies. It chronicles the late actress’s fatal demise brought on by the FBI’s surveillance program COINTELPRO, which targeted and tried to discredit Seberg because of her relationship with Hakim Jamal and the Black Panther Party. “Even though she went through circumstantially, really horrific, tragic things, there was something about [Seberg] that was energetically undeniable,” says Stewart. “She was so misunderstood. It’s not like you need to hero-worship a celebrity, they are just people you want to look at. The fact that people stared at her and fixated on things that were not real, projections: That really ultimately destroyed her.”

Her Charlie’s Angels character: Sabina, a Park Avenue heiress turned international spy. She’s a lovable doofus, a show-off with a dopey heart. She has a weakness for chasing bad guys, is prone to close calls and staying chill under pressure. She’s always snacking. It’s a comedic turn for Stewart. “I’m not even like that in real life. [Banks] put punch lines on my jokes every day. I overthink stuff, I make everything way too long. She’s like, ‘Dude, just say it faster.’”

She’s dating Stella Maxwell again but will only say this: “I only date people who complement me.”

Breaking Bella: “…I was finally given a chance to be looked at, not as this thing in this celebrity-obsessed culture that was like, ‘Oh, that’s the girl from Twilight.’ I think I’ve grown out of this, but I used to be really frustrated that because I didn’t leap willingly into being at the center of a certain amount of attention, that it seemed like I was an a–hole. I am in no way rebellious. I am in no way contrarian. I just want people to like me.”

Whether she believes in ghosts: “I talk to them. If I’m in a weird, small town, making a movie, and I’m in a strange apartment, I will literally be like, ‘No, please, I cannot deal. Anyone else, but it cannot be me.’ Who knows what ghosts are, but there is an energy that I’m really sensitive to. Not just with ghosts, but with people. People stain rooms all the time.”

She isn’t a strong swimmer. “I don’t want to enter the water, ever. If everyone’s going in the ocean, I’m like, No. When I’m in the water, I doggy-paddle.”

“I am in no way rebellious. I am in no way contrarian. I just want people to like me.” I don’t believe her. I mean, sure, she wanted people to like her at some point, but I covered her interviews in the Twilight era and she was a contrarian and a little rebel without a cause. That was her whole brand, but it was who she really was: a snarl, not a smile. And it was fun to watch because even though she was a poseur back then, it was refreshing to see a young woman in a franchise who wasn’t some hyper-styled fembot. Also: I totally believe her about ghosts and presences. I’ve walked into rooms or houses for the first time and just gotten bad vibes. I’ve never talked to those bad vibes and told them to chill though.

24 Responses to “Kristen Stewart talks to ghosts, asks them to chill out and haunt someone else”