Tom Brady: ‘I’m more of a thinker obviously than a physical specimen’

Another football season is upon us, which means we get to keep talking about Tom Brady. Brady is 42 years old and he’ll likely still be playing football for a few more years, maybe more. I would say that it’s past time for him to retire, but he keeps winning Super Bowls, so what do I know. It’s the same conundrum with Roger Federer too – like, how can you tell a guy who is still winning big titles and beating really good guys that his time is up? You can’t. Gisele can’t. Bostonians can’t. Robert Kraft can’t. And so Tom continues to play, and he continues to shill his Gwyneth Paltrow-esque fitness system and diet to the masses. Tom covers the September issue of Men’s Health, and he did a surprisingly long interview with the magazine, which you can read here. I found his quotes about his wife and family to be the most interesting part, but I’m sure I’m alone there. Some highlights:

On his cheat meal: “If I’m craving bacon, I have a piece. Same with pizza. You should never restrict what you really want. We’re humans, here for one life. What’s changed as I’ve gotten older is now if I want pizza, I want the best pizza. I don’t eat a slice that tastes like sh-t, and then wonder, Why am I eating sh-t pizza?”

On his wife, supermodel Gisele Bündchen: “Gisele is not really into sports. She’s like a kite flying in the sky, and I’m kind of tethering her. Sometimes I have to hold on hard. But she knows I’m always there for her.”

On how Gisele has helped him grow: “Gisele’s life has been very nontraditional. She left home when she was 14; she lived in Japan at 16 in an era with no cell phones. She lived in New York at 17 without speaking English. In her mind, there are no boundaries. ‘Why can’t you do that? Why do you have to go to school? Why can’t you just leave and live in a different country?’ In her reality, you can. Coming from mine, it was very different. This is what you do: You go to elementary school, you go to college. In her mind, why do you have to do any of those things? And you know what, she’s right. I’m the one that had to go, ‘You’re right!’ And that’s helped me grow.”

On how his three children gave him perspective when the Patriots lost to the Eagles in the 2017 Super Bowl: “I had to put my emotions aside so I could deal with their emotions. I said, ‘Guys, look: Daddy doesn’t always win. That isn’t the way life is. You really try hard – that’s the most important thing. If you gave it your best, you live with the outcome.’”

On how each of his kids delights him: “Jack is just like me – he holds a lot in. Benny lets it all out. Vivi, she doesn’t care. They’re going to be their own selves, not who you want them to be. Jack loves sports. He wants to try hard, and he never wants to disappoint his dad. That was me. I’d wake up early on the weekends to do stuff with my dad. That’s why I didn’t party a lot. If Dad wanted to golf, I wanted to be there with him. And if I ever missed those things, it would crush me. When Benny came along, I thought he would be just like Jack. So I was like, ‘C’mon, let’s do this.’ And he was like ‘Nope.’ And I was like, ‘What? No, do this!’ And Gisele kept saying to me, ‘Would you effing understand that your son is different?’ It was hard for me. I was like, ‘What do you mean? He’s a boy; he should do all these things that I do.’ The reality is that Benny just likes different things. And it’s great because now I just have to go do what he wants to do. When we do that, we have the best time.”

On the criticism of the TB12 Method: “I absolutely know 100 percent that it works, and the reality is I’m just a client who lives by the teachings. Say I see a guy who has a sore hamstring. I’ll think, His hip flexors are too tight; his hamstring is too tight. But the guy might say, ‘My hamstring must be weak; I must do more hamstring curls.’ It crushes me. I freak out. I need this teammate on the field!”

On training his brain to give him special powers at the line of scrimmage: “I’m more of a thinker obviously than a physical specimen.”

I really liked the part about his kids and understanding that his sons are different and like different things and they’re not just going to be his carbon copies. He’s said before that he lets Vivian get away with everything because she’s his little girl, but it sounds like he’s super-involved with all of his kids. As for the rest of it… I mean, his diet really IS that restrictive and he probably only takes one small bite of bacon before he feels the need to go and do some yoga, which has been rebranded The TB Method Bro Stretching™ or whatever. 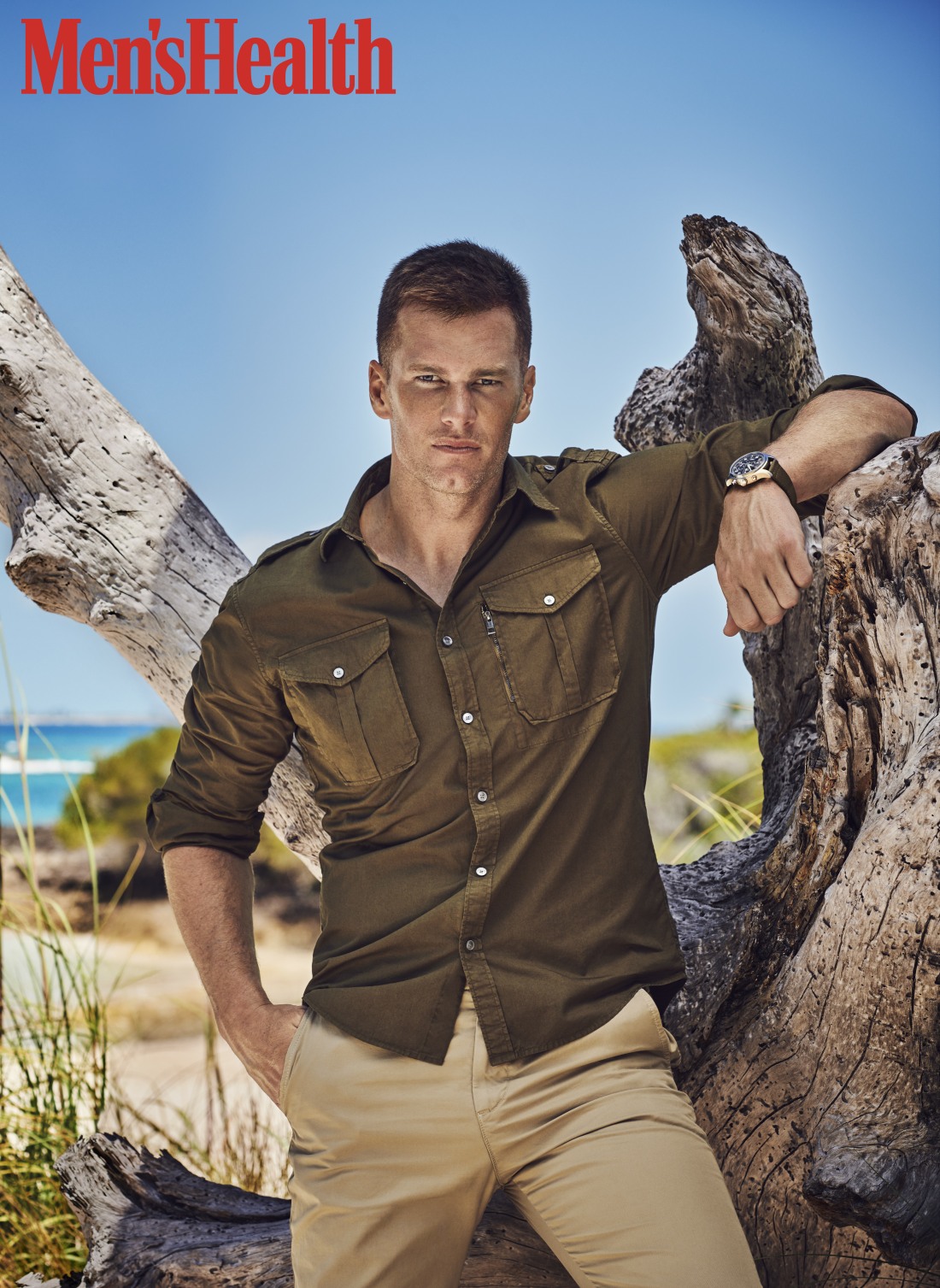 97 Responses to “Tom Brady: ‘I’m more of a thinker obviously than a physical specimen’”