Julianne Moore: It’s ‘not responsible’ to shield kids from terrible news about shootings 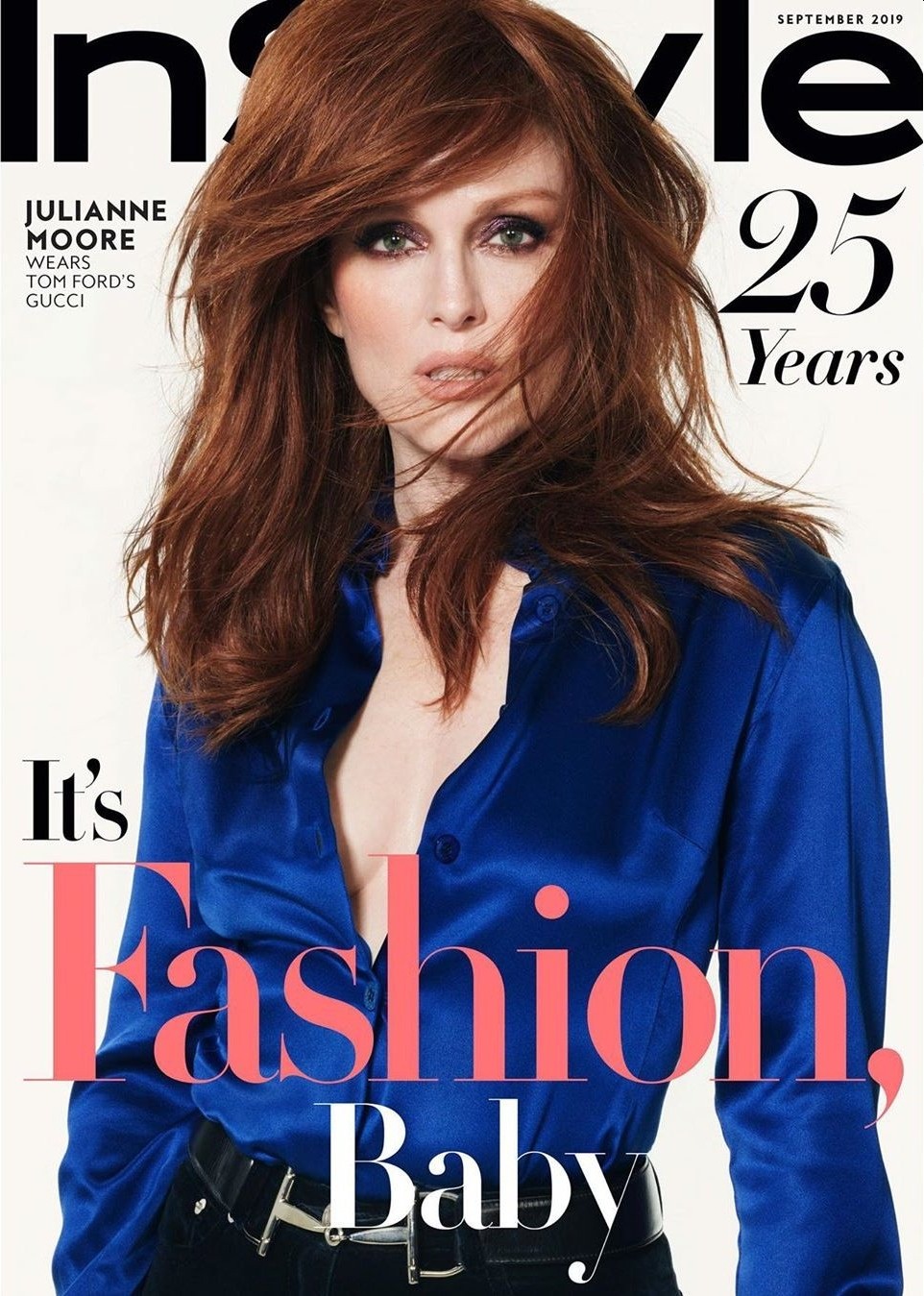 Julianne Moore covers the September issue of InStyle, which celebrates their 25th anniversary. InStyle gathered a lot of big names for this issue, but Julianne is the one who got the biggest interview. I kind of thought this cover was a throwback too, but no, this is real. Julianne looks THAT great. Ginger lady did THAT. For the cover story, Julianne is interviewed by Helena Christensen, which seems random as hell but I guess they’re good friends. They had a good conversation – you can read the piece here. Some highlights:

She proudest of her marriage to director Bart Freundlich: “Twenty-three years with the same guy. It’s pretty amazing. We like each other; we’re invested in each other; we’re a family. I think being a family helps. There’s nobody who’s as interested in your children as the other parent…he’s a romantic partner, a work partner, and also a parental partner. I’ve talked about this with my kids. I said, “You know, if you want to have a successful career and family, you have to find somebody who is as interested in that as you are and is willing to share the work with you because otherwise you can’t do it. It’s too hard.”

Her work with Everytown for Gun Safety: “The thing that galvanized me was Sandy Hook. I’ve told this story so many times, but it was December 14 of 2012, and my daughter was already on break from school. I brought her to work with me that day because Bart was working too, and Cal was at middle school. The news broke, and I didn’t know what to do, so I told the guy who was driving us to work, “Please keep the radio off.” I was going to wait until we were home later that night and explain it to her and her brother as a family, when I could assure them that they were safe. We were decorating the Christmas tree, and she had recently gotten a phone. It was very carefully monitored, but anyway, she looked at it, and she goes, “Mommy, did a bunch of little kids get shot today?” I was ashamed of myself because I realized that my idea of keeping my child safe by not exposing her to horrific news was not responsible.”

Opposition to the NRA: “I also felt I needed to do something to keep her and all the other children in our country safe from gun violence, so I started speaking out against it and following other activists on Twitter. I learned that [former N.Y.C.] Mayor [Michael] Bloomberg had formed this organization called Mayors Against Illegal Guns [which eventually joined Everytown for Gun Safety]. I worked with them to start the Creative Council, where I asked people I knew, other actors and artists, to speak out about gun violence. The majority of Americans are in favor of common-sense gun-safety regulation. This is really about us bonding together and forming a real opposition to the NRA.

Older women who feel invisible: “Yes, it’s like, invisible to whom? That’s not our narrative either. I see all my girlfriends. I see women everywhere I go. Put it this way: A 75-year-old man, if he did the work he wanted to do, had a successful career and a family, he’s probably not going to say, “I feel invisible.” Visibility is about your value as a human being and what you have to offer the world. Nothing other than that.

How many pairs of Birkenstocks she owns: “Oh, I can’t even count. I’ve stopped buying them because I have too many, and I want to make sure I wear them until they die. My favorites right now are the Rick Owens. Then I also have an all-green pair that’s a special edition I got in Berlin. They’re excellent.

There’s a lot of other stuff in that interview, like fashion advice from Tom Ford about not being precious about fashion, and even more about how she works with Everytown. Julianne is just a good egg, isn’t she? Not problematic, nice to everyone, loved by everyone, does her work and donates her time to good causes and more. I didn’t know that about her Birkenstocks though – lord, she’s one of THOSE, huh? I say that as I’m sitting her in my Lands End flip-flops, scoffing my ass off.

This is the amazing activist and #survivor #BrendaMoss. I was so inspired by her speech at #gunsenseuniversity and am proud to work with her to #endgunviolence. We are stronger together. Join us at @momsdemand @everytown Text JOIN to 644-33

15 Responses to “Julianne Moore: It’s ‘not responsible’ to shield kids from terrible news about shootings”