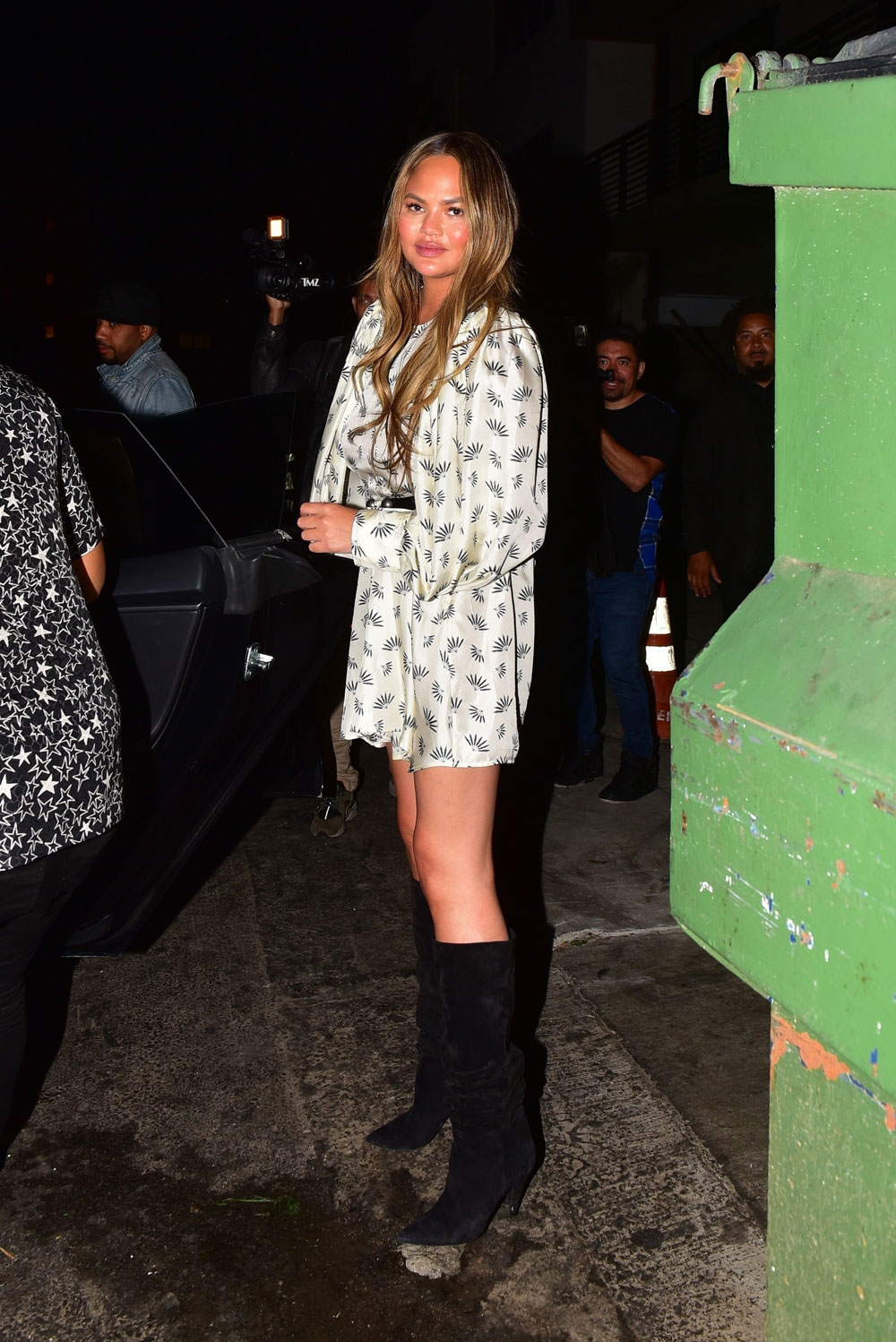 Chrissy Teigen is a polarizing person, but I appreciate how she’s living out loud and how she and her husband are as liberal as we are and regularly call out deplorables. She creates a lot of content and she’s somewhat like the Kardashian Jenners in that she’s easy to cover and has made a cottage industry out of that. Most of the time we ignore her unless it’s a particularly slow gossip week or she does something notable. This time she’s getting Botox in her armpits, which is interesting to me! People Magazine is covering this or I wouldn’t have noticed, frankly, I don’t have the time or interest to watch all the celebrity Instagram stories. People recaps how Chrissy previously admitted she got the fat sucked out from under her arms and liked the results. *ponders this* Here’s People’s report and I’ve included some screencaps below. This video is still available as of now, if you press the right arrow nine times on her stories. (She posts so damn much!)

In the clip, Teigen can be seen lying on her back as Dr. Jason Diamond injects botox into her pits.

It appears she was a bit nervous about the procedure as she held a piece of cloth over her mouth.

However, her worries were soon over as the process only took a few minutes.

“That really isn’t anything,” Teigen says before taking a sigh of relief. “It looked very frightening.”

“That’s it,” Diamond tells her.

This isn’t the first time Teigen has opened up about getting work done to her armpits.

In a 2017 interview with Refinery29, Teigen revealed “I had an armpit sucked out, which was one of the best things.”

“It’s a big secret, but I don’t care. It was nine years ago or so. And I had two inches to my armpit. Now it’s back though, so now I’ve gotta pay for [liposuction] again.”

“It was so easy. It made me feel better in dresses; I felt more confident. It was the dumbest, stupidest thing I’ve ever done. The dumbest, but I like it, whatever. I have no regrets, honestly.”

I don’t sweat, just a small to average amount I think. I once met a lady who has that sweating disorder, hyperhidrosis, and she explained (I met her in a group) that she is self conscious about it and that she doesn’t shake hands for that reason. I could see getting Botox for that so you feel more confident, but this is kind of superficial. Chrissy would admit it’s superficial though, she doesn’t care, and I like how she explained getting the fan sucked out of her armpits. I would get my batwings (that problem area under your upper arms) fixed! I’ve been lifting more and they’re a little better but they still bug. Also, Chrissy looked kind of Botoxed and filled in that video without makeup on. It’s hard to tell though and it seems like if she was getting her face done she would admit that too. Oh she did admit she’s done work to her face, I just searched on it. She just didn’t go into specifics. Fair enough! 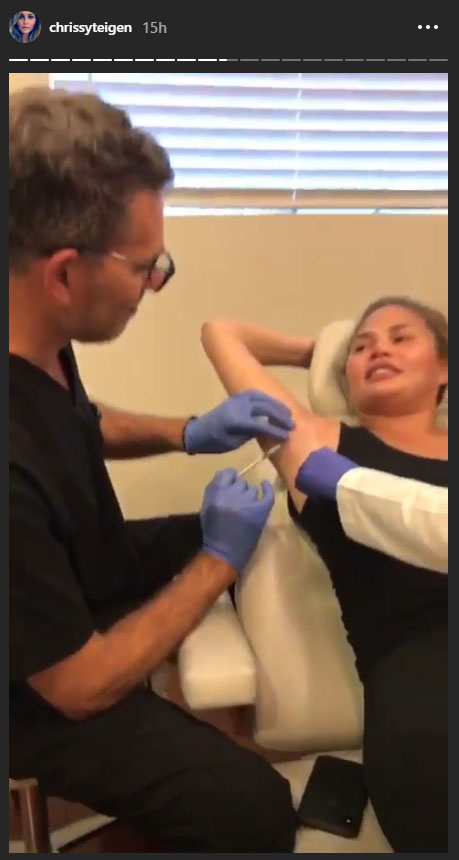 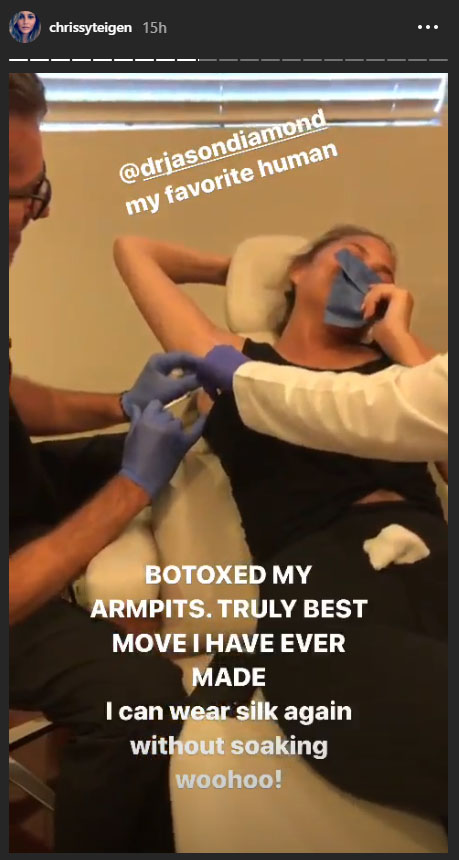 Also she shared a video opening a package of tiny food from Real Littles, which is a Shopkins toy brand. I am so going to feature this in the next Amazon post as it’s very cute. I need to do “research” on these toys first though. 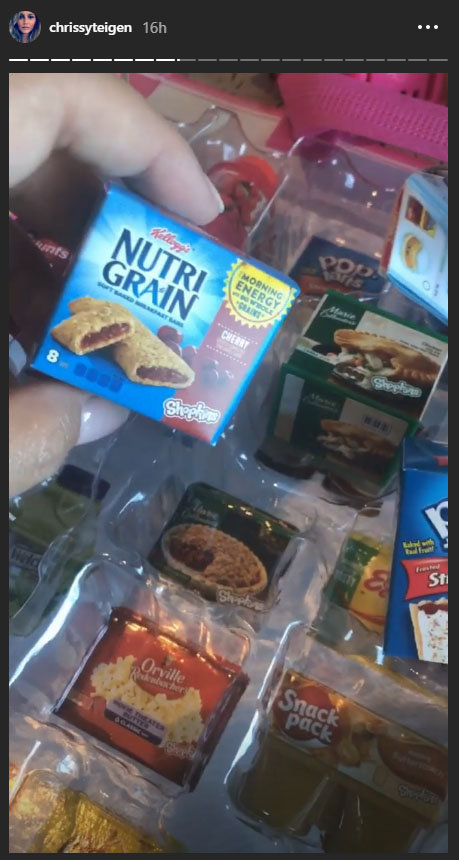 Just found my favorite breastpump @haakaanz today during #worldbreastfeedingweek and feeling nostalgic thinking back to the days with my tiiiny babies. It made it so easy for me to pump (and live life)! Seems so long ago, but I guess now I'll just use it as my new drinking cup. #WBW2019 #haakaa #sponsored