Duchess Meghan has been working on the SmartWorks collection since January 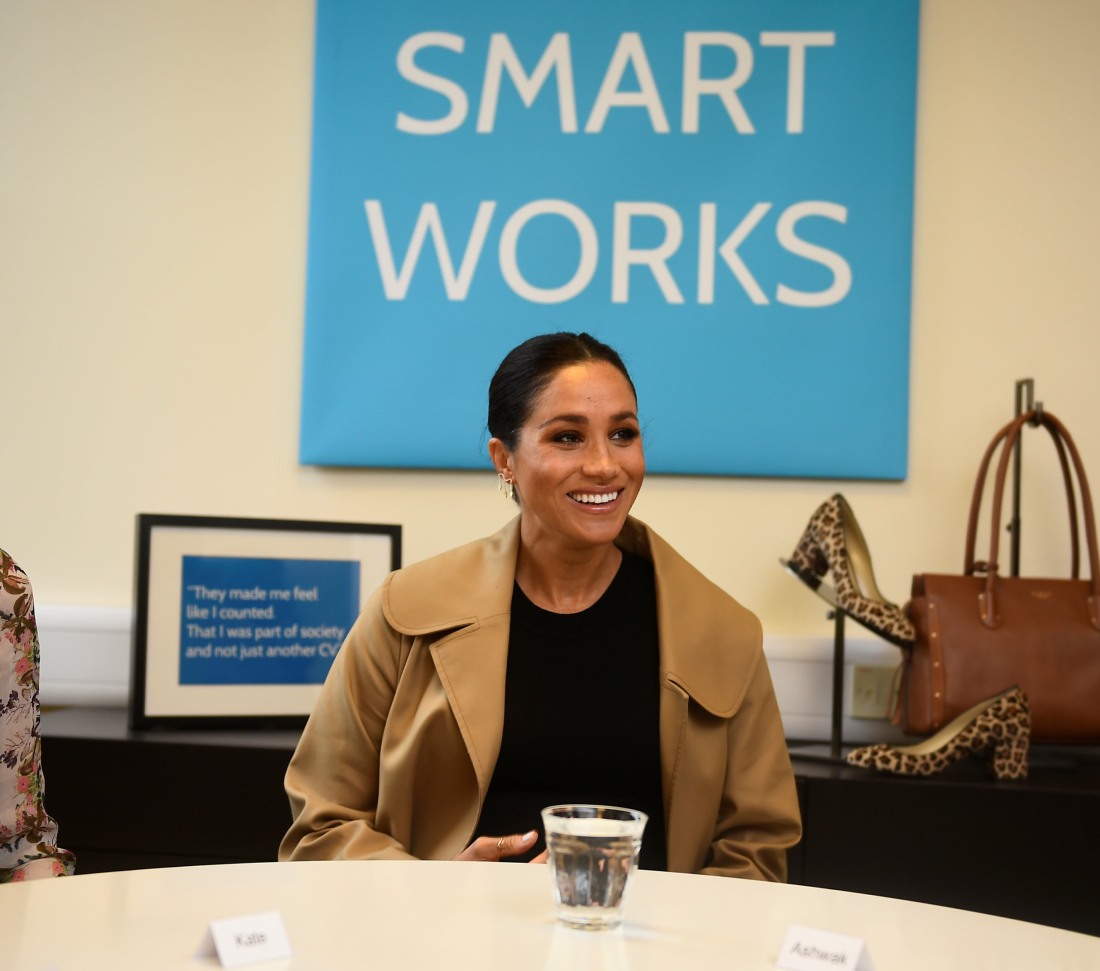 The Duchess of Sussex did all of the work ahead of time. Just like the Hubb Community Cookbook, Meghan figured out the best way to help her patronage, SmartWorks, she planned how it should work, she spent months organizing it and then she spent a month working with designers, SmartWorks people and retail outlets. She wanted to ensure that the launch of her collection went flawlessly, and that people understood her intention. Magazines like Vanity Fair and Harper’s Bazaar are already publishing their exclusives, and it’s clear that everyone involved was more than happy to be associated with this project:

When John Lewis head of womenswear Jo Bennett received a call from an unknown number one late January afternoon, the last person she expected on the line was the newest member of the royal family. But the Duchess of Sussex was on a mission: To bring together four of Britain’s leading affordable fashion brands to create a capsule collection of workwear, to be sold on a one-for-one basis in the name of Smart Works.

The idea was born just after Meghan became patron of the organization, which empowers disadvantaged women with the right tools and clothes to get back into the work place, at the start of the year. After listening to clients who wanted to feel comfortable and confident, the Duchess realized that while there’s never a shortage of donations (including items from her own wardrobe), Smart Works’ stock didn’t always feature every size, or classic, key staples needed to anchor an outfit. Meghan pitched the idea for a collection to the Smart Works team, including executives Juliet Hughes-Hallett and Kate Stephens, and it was an instant hit. “She wanted the basics of a capsule collection to always be available,” a source tells BAZAAR. “Pieces that were more mix and match-able rather than just one new outfit.

“She brought it to life immediately,” the source adds. “After consulting with Smart Works about their needs, she contacted bosses from each of the brands directly—cold calls!”

Today, Duchess Meghan officially launches the Smart Set, a capsule wardrobe produced in partnership with John Lewis & Partners, Marks & Spencer, Jigsaw, and designer Misha Nonoo. The five-piece collection, to be unveiled today at an in-store event at London’s flagship John Lewis store, brings together workwear essentials, including a versatile M&S crepe dress, flattering for all sizes, at just £19.50, or $24.

Omid Scobie at Bazaar seems to have gotten the biggest exclusive, although Katie Nicholl at Vanity Fair also thinks she got an exclusive too. There’s a lot of similar information in all of these articles, so I guess much of it just came from a press release. What else? Meghan’s favorite piece of the collection is the perfect tote bag sold at John Lewis (which is already sold out). It comes in black or tan, and both colors need to be restocked. The tote was a Meg-specific idea too – she apparently saw that there was a gap in SmartWorks’ collection/donations for office bags big enough for a resume. Meghan also released a statement:

“Since moving to the U.K., it has been deeply important to me to meet with communities and organizations on the ground doing meaningful work and to try to do whatever I can to help them amplify their impact. It was just last September that we launched the Together cookbook with the women of the Hubb Kitchen in Grenfell. Now, one year later, I am excited to celebrate the launch of another initiative of women supporting women, and communities working together for the greater good. When you buy any item in the Smart Set Capsule Collection for Smart Works, the same item will be given to a Smart Works client, and with it, the confidence and support she needs to enter the workforce and take an important step in building a career. Thank you to the four brands who came together in supporting Smart Works on this special project—placing purpose over profit and community over competition. In convening several companies rather than one, we’ve demonstrated how we can work collectively to empower each other—another layer to this communal success story, that I am so proud to be a part of.”

The only thing that bugs me is that the collection is only FIVE pieces. I get that this was always billed as a “capsule collection,” but I really hoped that we would get a good 10-12 pieces, because I feel like that would truly give us “the wardrobe basics.” Trousers, in black, navy and grey. A white button-up blouse. A light, professional sweater in multiple colors. A twinset. A pencil or A-line skirt in multiple colors. One or two tote bags. A blazer. And on and on. Also: the tagline for this project is “Not a handout, a hand, held.”

A closer look at the #SmartSetCollection pop-up launch event on the rooftop of @jlandpartners’ Oxford Street store. pic.twitter.com/o5Awa91BdC

Take a look at Meghan’s @SmartWorksHQ capsule collection -on sale now. She says: Since moving to the UK, it has been deeply important to me to meet with communities & organisations on the ground doing meaningful work & to try to do whatever I can to help them amplify their impact pic.twitter.com/b0AP6sqIt9