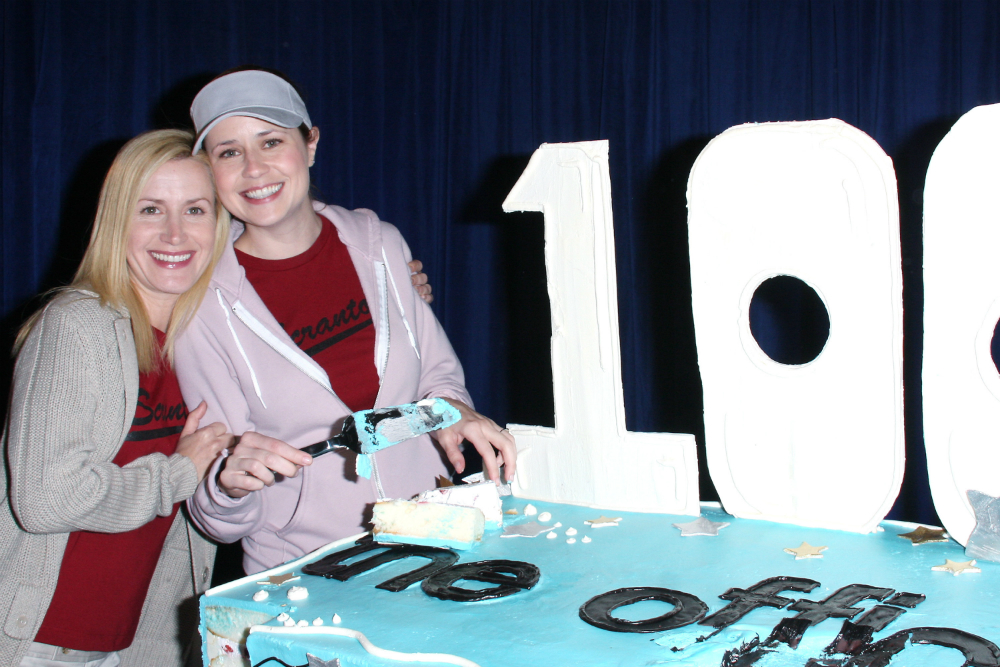 Jenna Fischer and Angela Kinsey, who played Pam Beasley and Angela Martin on the American version of The Office, are launching an Office-based podcast called Office Ladies. When I first heard this, I wondered if we really needed an Office-themed podcast but reading what the show will actually entail, I can see the attraction. Jenna and Angela will watch old Office episodes and give behind-the-scene stories and secrets from that particular episode. I love behind-the-scene stories, I always skip to the commentary extra on the DVD (dated reference, I realize) so I might check this out.

The “Office Ladies” are back!

In an exclusive interview with PEOPLE, The Office alums and real-life BBFs Jenna Fischer and Angela Kinsey are getting candid about their upcoming and highly anticipated Office-themed podcast, Office Ladies, which will delve into behind-the-scenes stories about Pam Beesly, Angela Martin, Jim Halpert (John Krasinski), Michael Scott (Steve Carrell) and the rest of the Dunder Mifflin gang.

“We’ve been wanting to work together again ever since we stopped working together,” Fischer, 45, tells PEOPLE. “Angela and I became best friends because we were cast on The Office together, we worked together and saw each other every day. I think the hardest part for me about it ending was that I didn’t get to see my best friend every day anymore.”

“We just said, ‘You know, next year is the 15th anniversary of the show and this seems like a really fun time to share our memories. How could we do that?’ And that’s how we came up with the idea of the podcast,” she adds.

Although Kinsey, 48, admits that they “don’t consider ourselves the experts on The Office in anyway,” they are open to discussing what audiences are eager to have answered. “The fans are more experts than we are, so we are going to be looking for questions. We want to talk about the things that people want to know about.”

The fact that these two created Office Ladies just so they could hang out again is fun. Why not get paid doing the thing you love, like gabbing with your best friend. And I 100% believe that the fans know more than they do. Devoted fans of a show treat it like a research project. In truth, letting fans show off their knowledge will probably be the best way to honor them, they’ve really thought this concept through. It’s also a great tie in to NBC/Universal’s Peacock’s acquisition of The Office, I’ll bet they got some cross-promotion cash for this. The idea sounds cute. They’ve released a trailer to promote the October 16th launch. It tells a behind-the-scene story that involved how they did a vomiting scene, the technical aspect of which I found kind of interesting. But they need to work on sounding more relaxed because right now, their ‘off-the-cuff’ banter sounds very scripted. “I have a story, do you know this story?” “I do not know that story, please tell me the story. OMG, that story!” Once they become less conscious of the fact they’re taping, I’ll bet the flow becomes more relaxed. (For a good example of a relaxed flow with camaraderie coming across, may I suggest Gossip with Celebitchy with CB and Kaiser.) Jenna posted this little teaser to IG, it’s better.

In addition, Jenna and Angela said they’ll host former co-stars as guests. That will be fun to hear, there were many very talented people on that show and fans will be clamoring to hear them relive their time on The Office. And this cast in particular have truly stayed in touch so I don’t think it will be hard for Jenna and Angela to get them to come on.