Pete Davidson on his love language: ‘I treat the person I’m with like a princess’ 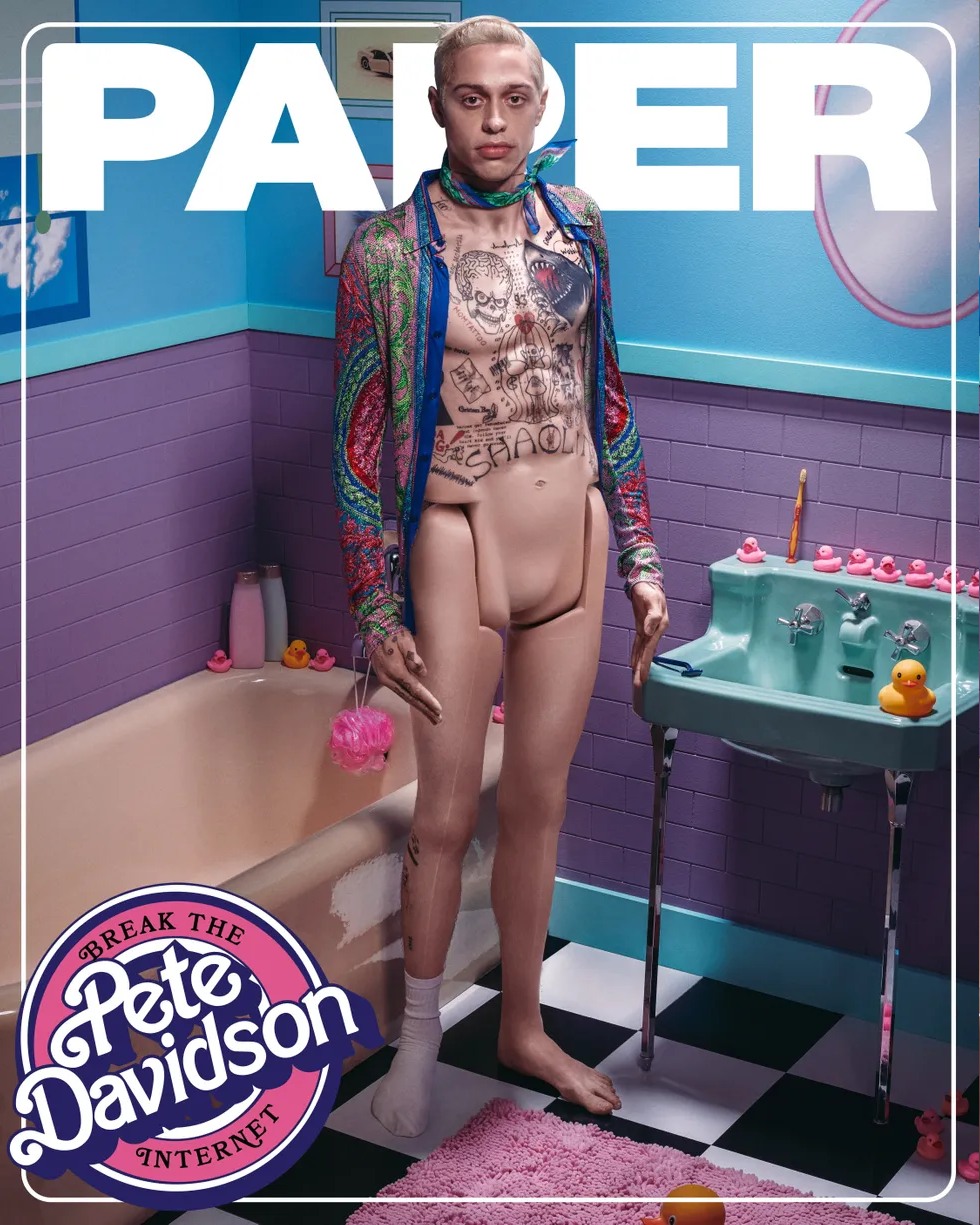 Pete Davidson covers the “break the internet” issue of Paper Magazine and yes, the concept of the cover shoot was basically “what if Pete is a Dirtbag Ken Doll.” On some level, it works and on another level, I will never recover from the horror of this cover. Y’all know that I’m not a Pete Davidson fan so I came into the interview with low expectations. I get the feeling that the Paper journalist came in with low expectations too, but he came out of genuinely liking Pete and enjoying Pete’s lowkey vibe. It’s actually a good read – Pete talks about how he behaves in relationships, what he’s learned from previous (high profile) relationships, and how he sees his allyship to the LGBTQ community and more. You can read the full piece here. Some highlights:

Where he is when he’s not working: “I’m always in Staten Island, since I built this little fortress in my mom’s basement. Pretty much all the homies just come over, we smoke a bunch of weed and micro-dose [mushrooms] and we watch movies. We don’t really go out much, and I made my basement kinda like Vegas, where there’s different lights, so you can’t tell what time it is ever… Also I pump it full of oxygen — we have a thing that sucks the smoke out… My mom Peloton bikes every night… and it really sounds like she’s getting banged out…

Everybody being hyper-sensitive in comedy these days: “It makes doing college [shows] really hard. I refuse to do a college after this year ’cause it’s like, you’re just setting yourself up for trouble… Comedy is just, like, getting destroyed. Standup’s about to be about, like, sneakers. Like, “Hey, everyone like sneakers?” You can’t talk about anything. You can’t. The second you open your mouth and have an opinion, you lose money today. And I don’t think that’s a safe place to live in. It’s the worst! It’s why I got rid of the Internet.

He used to jerk it to Leo DiCaprio: “I used to jerk off to Leonardo DiCaprio… Uhh, like his acting….Yeah. I used to have a HUGE crush on Leonardo DiCaprio. I had this huge poster of him from The Beach in my room, and there used to be, like, “Leo love books”… Do you remember? Like, right when Titanic came out [when I was] in like third or fourth grade, he was just like, “teen milk.” There were love books and I had all of them. He was the coolest.

On his love language & PDA: “I do all that sh-t! My love language, when I’m in a relationship, is I treat the person I’m with like a princess. I try and go as above and beyond as possible, because that’s what you’re supposed to do? If you’re in a relationship with someone, you’re just supposed to make that person feel as special as possible. But sometimes when you put so much on someone, it overwhelms them, and then they don’t know if they could come close to that…Or if they can keep up with it. So, it’s very off-putting to some. Sometimes it works, and sometimes it doesn’t, and then it sometimes makes me feel bad about myself because I’m like, “I did all this stuff and…” You didn’t care at all! But you can’t do that. I have learned that anything you do, it just has to be ’cause you wanna do it. No expectations. Otherwise you’re gonna be resentful.”

Being a good ally & a good friend: “Well, nothing’s cooler to me than seeing my friends crush it. I also have the most talented friends ever. And I think my friends are a good reflection of me… anybody that I f-ck with is sweet and morally sound, you know? I find it super weird that it’s weird that a straight dude has gay friends… like, some straight dudes do have gay friends, but like they make like a big show of it as opposed to them genuinely being a friend…

On Ariana Grande: “I don’t ever make public statements about relationships ’cause I just don’t think it’s right, you know? I usually express how I feel about anything through work. So, I hope she’s well. I hope she’s very happy. And that’s pretty much it. And print doesn’t usually age well.

He circles back to talking about how he treats girlfriends like princesses and he psychoanalyzes himself a bit and says maybe he treats women like that because he lost his father so young and he always wants the people in his life to know that he appreciates them and cherishes them before he loses them, basically. His conversation about pop stars using gay folks as props felt like one big subtweet of Taylor Swift… to me, at least. But he totally could have been talking about Madonna or a dozen other pop stars. It just felt very Swifty. As for the Leo D thing…it feels very sex-positive? I mean, Leo was hot in the mid ‘90s.

36 Responses to “Pete Davidson on his love language: ‘I treat the person I’m with like a princess’”