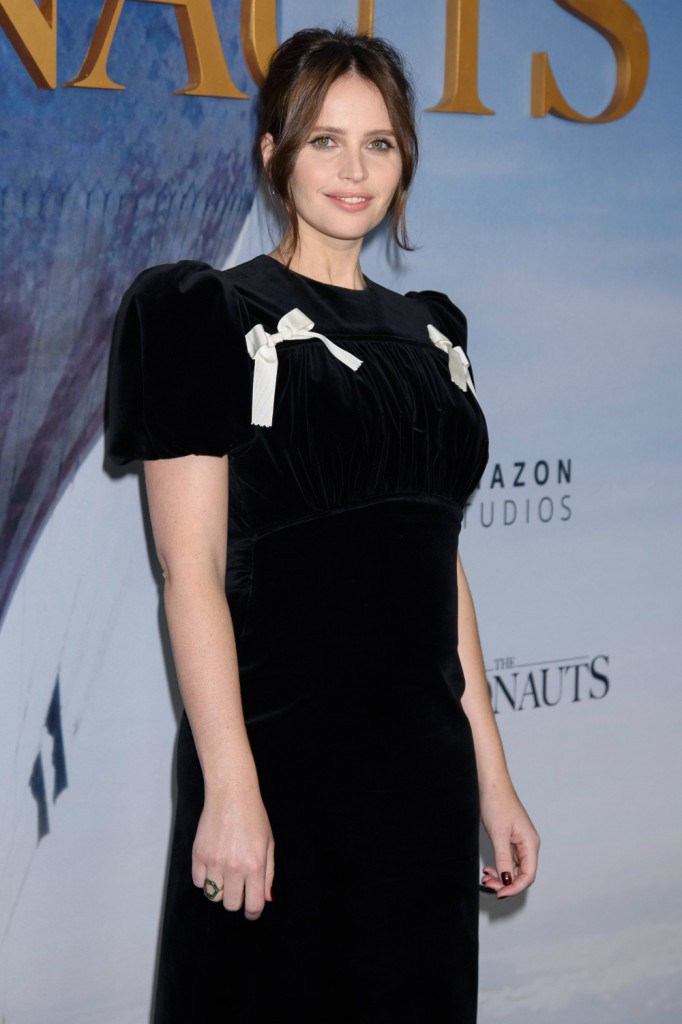 We don’t talk much about Felicity Jones here, but I think that’s the way she wants it. Felicity tends to only pop up to promote her work, which she can get away with because she’s a pretty good actor. Occasionally she’ll share some private news with us, but it’s usually after the fact, like her wedding last year to director Charles Guard. But earlier this week, Felicity announced that she and Charles are expecting a baby in 2020! Felicity is promoting her film with Eddie Redmayne, The Aeronauts. The film is getting decent reviews, most saying the thrills of the hot-air ballooning and the chemistry of these repeat co-stars makes the movie. Felicity wore the cute, season appropriate back velvet dress above to the New York premiere.

Felicity Jones is closing out 2019 with a bang and stepping into her biggest role yet. The Aeronauts actress is expecting her first with husband, Charles Guard, E! News has learned.

While not many details have been shared about her pregnancy, she cheekily showed off her growing baby bump… without anyone knowing!

On Wednesday night, the 36-year-old star braved the cold weather in New York City to attend the premiere of her and Eddie Redmayne’s latest film, The Aeronauts. For the special occasion, Jones donned a black velvet gown that featured statement white bows on the shoulders and dramatic puffed sleeves.

Her bump is supposedly visible, but I can’t see it, the puff sleeves draw my eye instead. She looked good – happy and healthy, which is all the matters for the new mom-to-be. Felicity isn’t really adventurous style-wise. Although that served her well with her wedding dress which was simple, classic, elegant and just a dream on her. As the article said, we don’t have much news. I’d love to tell you there will be more details to follow but I think we know from Felicity’s pattern that this might be the last we hear of it until the little one arrives. It’s fun to think that maybe Eddie could be a godfather. He was at the wedding, it’s not outside the realm of possibility.

Outside of the baby news, Felicity told ScreenDaily that she’d sought more action films after Rogue One. Although the life size balloon and basket built for the Aeronauts actors never left the soundstage, for realism sake, they were bombarded with rain, wind machines and freezing temperatures to make floating 30,000 feet in the sky look real. Sounds like director Tom Harper took a page out of James Cameron’s book. The movie opens today in theaters and will come to Amazon Prime December 20. I think I’ll tap out for this one due to my fear of heights. I’ve posted the trailer and some pics from the New York and UK premiere. I’m including Eddie because my gawd, that man knows how to dress. Look at his New York ensemble with his trench coat and polka-dot silk scarf. 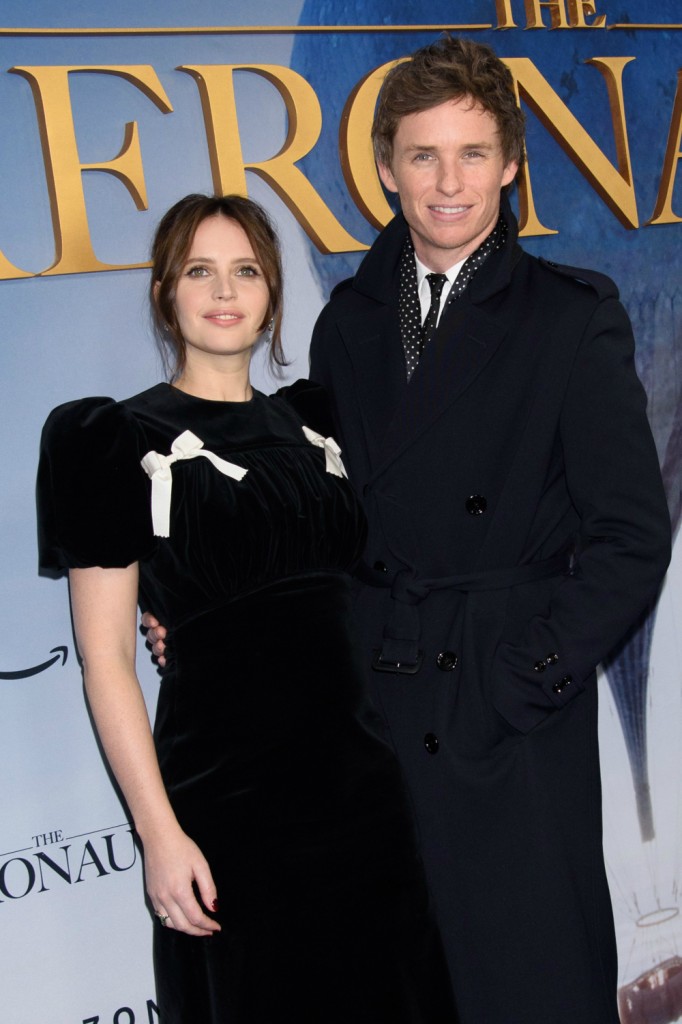 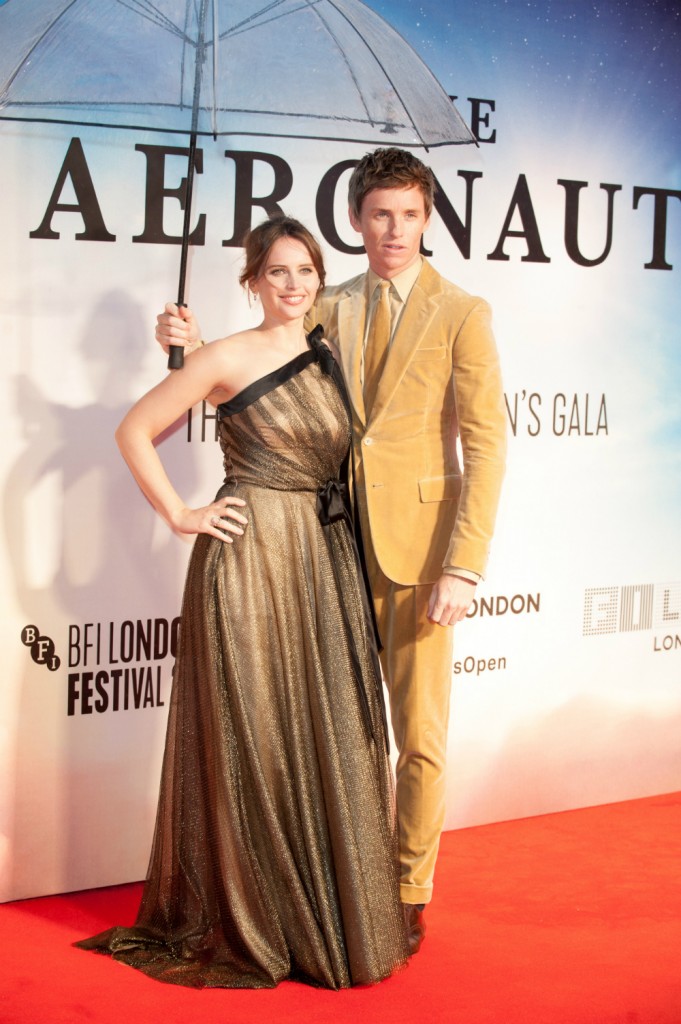 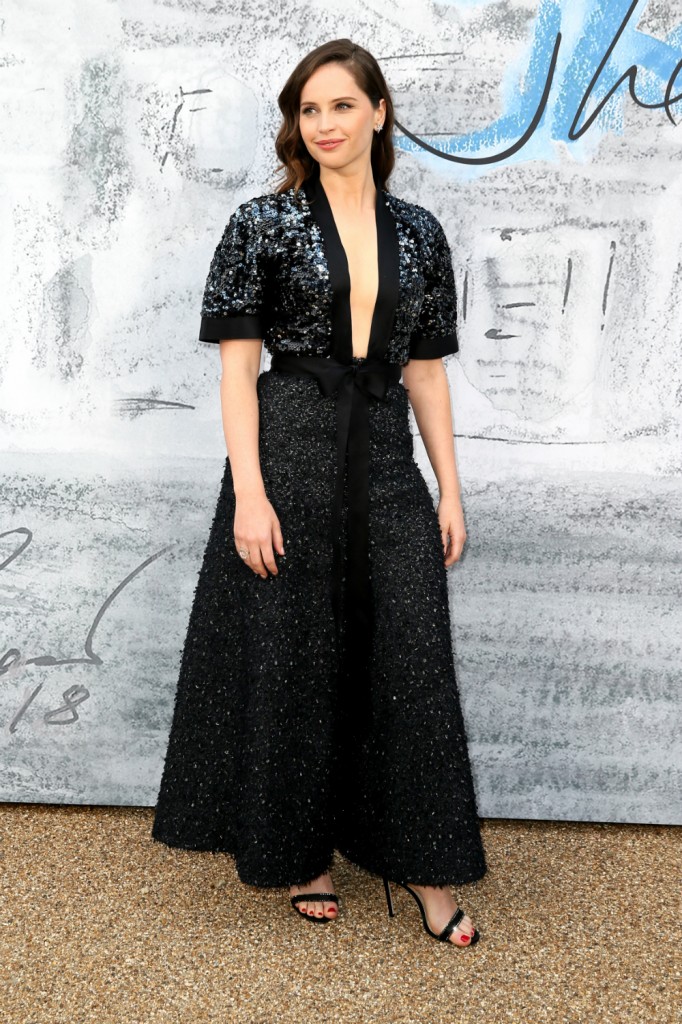