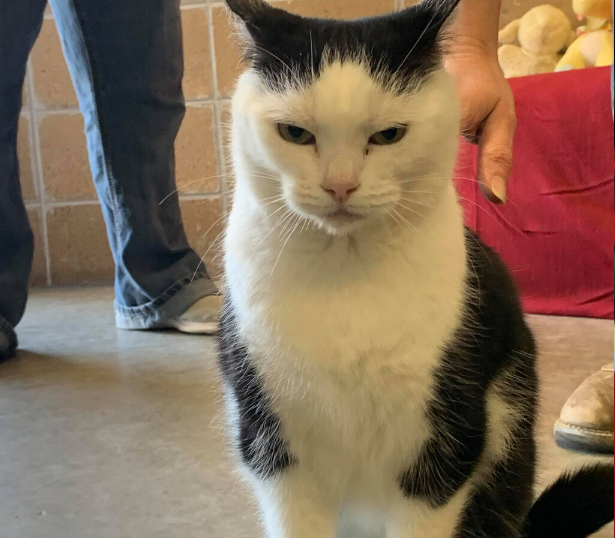 My Facebook feed is always full of posts about cats and dogs that are looking for their forever homes. The stories make me want to adopt every single one that I see, and the pictures are always adorable. A shelter in North Carolina has tried a different tactic to get a cat named Perdita adopted. They have dubbed her “World’s Worst Cat,” and are pulling no punches:

An animal rescue has created a hilariously honest adoption ad in hopes that someone would take the “world’s worst cat” off their hands.

The Mitchell County Animal Rescue in Spruce Pine, North Carolina captured pet lovers’ attention on Wednesday when they posted a cheeky adoption notice for Perdita, a domestic short hair mix that they say is “not for the faint of heart.”

“Perdita, we thought she was sick, turns out she’s just a jerk,” the organization captioned photos of the feline shared on Facebook.

In the posting, the rescue wrote that Perdita likes “staring into your soul until you feel as if you may never be cheerful again,” “lurking in dark corners” and “fooling shelter staff into thinking she’s sick.”

They also shared that Perdita does not like interacting with kittens, dogs and children and hates being hugged by humans.

Aww. Poor Perdita. She’s at the shelter because her owner died, so I’d bet that has something to do with her personality at the moment. I have a very cranky cat, so I can relate to having a pet with a less-than-joyful attitude, though my cat does actually like me. (At the moment, he’s lying near my feet with his head on his front paws.) Perdita is cute and her pose in those photos makes me think that she likes to run things. I’m sure there has to be someone out there who doesn’t have other animals or children and who wouldn’t mind having a not-mushy cat. I hope that Perdita finds her forever home soon, and that, assuming she’s likely upset about her owner’s death, she’s able to feel safe and loved and perhaps relaxes a bit.